The Supreme Court ruled June 30 on the case of Harris v. Quinn, a case that potentially holds the fate of public sector labor unions in the balance.

In a 5-4 decision written by Samuel Alito, the Court delivered a serious blow to public sector unions, but did not rule as sweepingly as some union leaders had feared. Still, Justice Alito and his colleague heavily hinted that in a future case they might well be willing to offer that more sweeping ruling.

The Court ruled that the state of Illinois cannot make the particular class of workers at issue in the case pay a representation fee to labor unions, but declined to explicitly overrule previous precedents that had upheld representation fees for public school teachers and other direct employees of state or municipal governments.

The decision will hurt public sector union finances and membership, and close off one of the few promising avenues for union growth — but leaves most existing public sector workers' unions untouched. Untouched for now, that is. The Court did not overturn existing precedent, but did not offer a ringing affirmation of it either.

What is the Harris v. Quinn case about?

Broadly speaking, the case is about the legality of mandatory fees — "fair share fees" as unions like to call them — for public sector workers who benefit from collective bargaining agreements but who aren't members of the labor union that negotiated the agreement. But in an angle that proved important for Justice Alito's ruling, the workers at issue in this case are contractors working on a state program rather than direct employees of a state or city government.

The issue arises because of a basic collective action problem in union organizing.

When a union campaign gets higher pay or other benefits for workers in a given workplace, then everyone benefits from the collective bargaining agreement whether or not they join the union. Therefore, it is not in the individual interest of any particular worker to be paying union dues. To get around this, labor unions typically try to negotiate what's known as a closed shop arrangement in which everyone has to pay a representation fee to the union whether they join it or not.

In many states, however, these closed shop arrangements are illegal.

Proponents of bans on closed shops call them right to work laws, and often refer to the alternative as forced unionism. In the private sector context, unions and their allies often highlight the irony of free market types trying to make a specific form of contractual arrangement illegal. In this particular lawsuit, the plaintiffs are alleging that the requirement to pay a representation fee in a public sector context represents a violation of first amendment free speech rights. The contribution, the plaintiffs argue, is a mandatory subsidy toward the union's political activities.

What are the specifics of the case?

The plaintiff, Pam Harris, is the mother of Josh Harris who has Rubinstein-Taybi Syndrome, a severe illness that leaves him in need of constant care. Illinois provides a modest financial benefit for people in need to hire home-based health care on a contract basis. Like many recipients of disability benefits in Illinois, Harris has contracted with a family member — in this case his mother, Pam — to be his caregiver.

Many Illinois caregivers are in bargaining units that are represented by either the SEIU or AFSCME, and members of such units need to pay representation fees.

Harris is asking the Supreme Court to rule that it's unconstitutional for Illinois to make these fees mandatory. And standing behind Harris is the National Right to Work Legal Defense Foundation, backed by the usual array of conservative moneybags types, including the Bradleys, the Waltons, and Charles Koch.

What did the Court rule?

Labor unions wanted the Court to simply reaffirm the precedent set in Abood v. Detroit Board of Education holding that public sector collective bargaining is fine, and public sector unions can have representation fees.

The court did not do that. Instead it disparagingly referred to Abood's "questionable foundations" and argued that the Abood Court "fundamentally misunderstood" the relevant doctrine. But the Court also did not take the path preferred by conservative activists, of overturning Abood and immediately instituting a nationwide right-to-work policy for public sector unions.

Instead, while disparaging the Abood decision they also held that it does not apply to the facts of the case. The Court held that the home health aides are not "full-fledged public employees" so their representation fees can be held unconstitutional without the Court needing to rule on fees for teachers, firefighters, and other more traditional employees.

What was Harris' argument?

By one of those happy coincidences that tend to arise in American constitutional law, the groups backing Harris' legal argument also think strong labor unions are bad economic policy while her opponents think the reverse.

How big a deal is the ruling?

On one level, the consequences seem modest. Most public sector workers in the United States are not covered by this ruling.

On the other hand, the Supreme Court has just closed off a promising avenue for potential growth in union membership — something that's been hard to find in recent decades.

More broadly, though the Court did not overturn the Abood decision they heavily hinted that the same 5-4 majority might be willing to do so if a different lawsuit were brought to them. Since the public sector is much more heavily unionized that the private sector, an Abood reversal would be a huge blow to American labor unions: 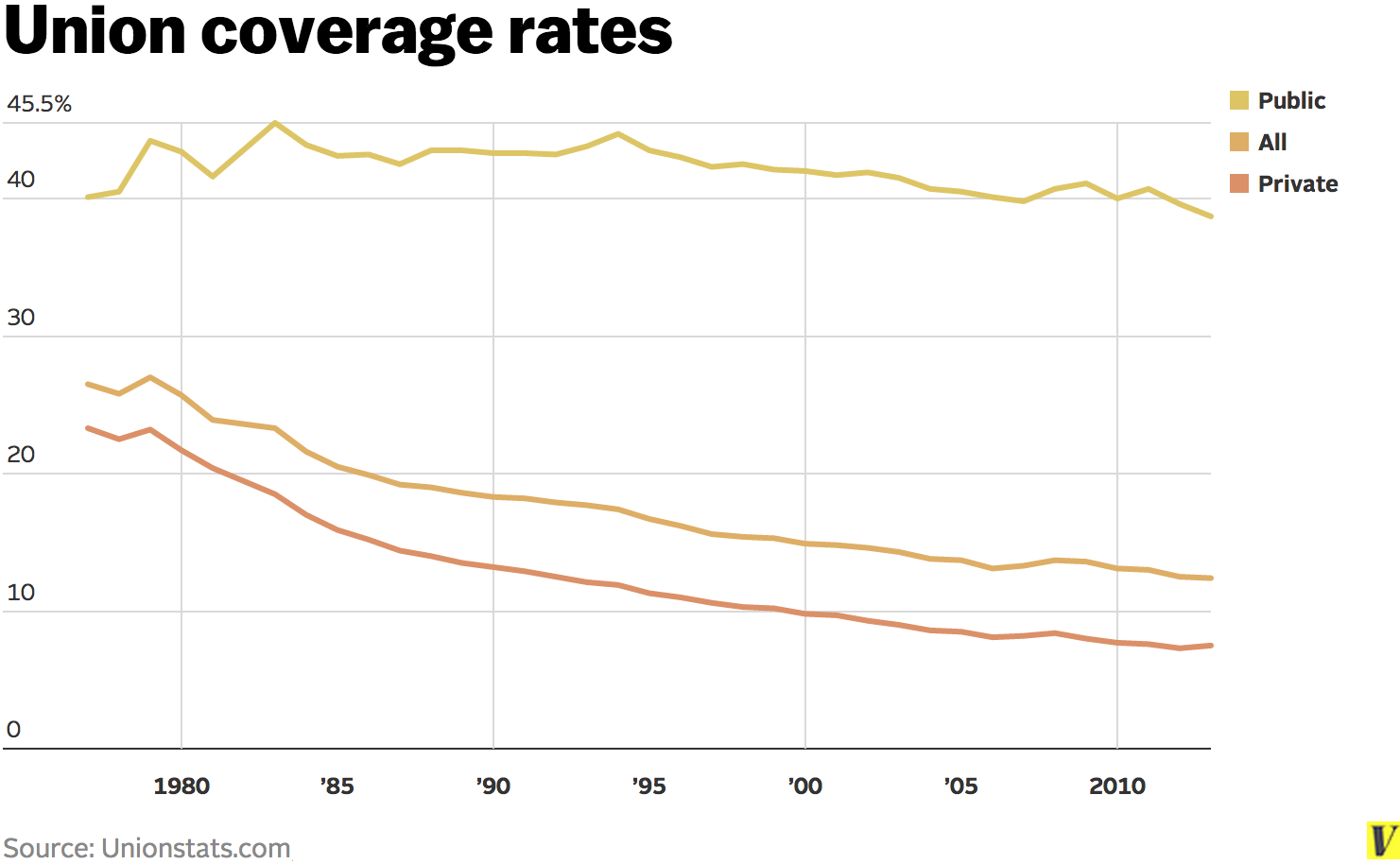 On another level, even a Harris win would not exactly have altered the bleak big picture landscape for the American labor movement. Republican Party politicians in traditionally union-friendly states such as Wisconsin and Michigan have demonstrated an eagerness to roll back union-friendly rules whenever they get a chance, whereas Democratic Party politicians in right-to-work states like Virginia hesitate to press for changes. Obviously a loss in the Harris case would greatly accelerate the prevailing trend, but it's already the prevailing trend.

Needless to say, people disagree! Here's Josh Barro, then of the Manhattan Institute, making the case for tough anti-union measures in state government. Here's Nelson Lichtenstein making the case that the overall success of progressive politics depends on strong unions, including in the public sector.

A more nuanced argument comes from sociologist Jake Rosenfeld, author of the recent book What Unions No Longer Do. Rosenfeld's book is broadly pro-union, finding that the decline of labor unions is a major driver of rising inequality and wage stagnation among other ills. Rosenfeld argues that public sector unions don't really work to curb these trends, because public sector workers tend to be better-educated and higher-paid than the average American regardless of union status.

But of course unions play other roles besides their direct one in altering the wage structure — notably they intervene in politics, typically on behalf of progressive causes. That political role of unions is key to the logic of Harris' legal argument and it's also where the impact may be felt the strongest.