This is the first licensed self-driving truck. There will be many more.

Share All sharing options for: This is the first licensed self-driving truck. There will be many more.

Last night at the Hoover Dam, the Freightliner company unveiled its Inspiration Truck: the first semi-autonomous truck to get a license to operate on public roads.

The Inspiration is now licensed to drive autonomously on highways in Nevada. It works a bit like a plane's autopilot system: a driver will get the rig on the highway, and can take control at any time once it's there. But the truck will be able to drive itself at high speeds, using cameras to make sure it stays within its lane and doesn't get too close to the vehicle in front of it.

This isn't a full-fledged autonomous truck, but it's a crucial first step toward one. And though this event isn't getting nearly as much attention as Google's debut of its self-driving car last year, there are good reasons to believe autonomous technology will transform the trucking industry much sooner than the private car.

1) It's harder to find truckers than cab drivers

There's one big reason why companies like Freightliner — as well as others in Japan and Europe — are investing in this sort of technology, and it's not good news for the 1.7 million people who drive long-distance trucks.

The trucking industry constantly struggles to find enough drivers, even when unemployment is high. And the cost of a machine operating a vehicle will be dramatically cheaper than the cost of a human.

The long-distance trucking industry carries about 68.5 percent of all goods shipped in this country, and on average, paying drivers accounts for 30 percent of its costs. One of the things that drive up the cost of drivers is the fact that long-haul trucking is a much more unpleasant lifestyle than driving a cab. Many drivers spend five or six days a week on the road, which is why trucking has such an extraordinarily high turnover rate: about 98 percent annually.

Obviously, machines won't care about these lifestyle difficulties. In fact, the Australian mining company Rio Tinto has already begun implementing autonomous trucks at its remote iron ore mines, partly because it's so expensive to get drivers to go live in those places.

Another factor is that unlike for taxis, limits on the number of hours a person can drive also drive up the cost of transport. A trucker can legally only drive for 11 out of every 24 hours, so shipping something cross-country requires delays for sleeping, or paying two drivers who trade off. That won't be the case with driverless trucks, which will also be able to more easily take advantage of traffic-free interstates at night.

Freightliner says its new technology isn't meant to eliminate drivers — it's mainly intended to cut down on driver fatigue, reducing the frequency of accidents. But if it doesn't develop the technology to fully replace drivers, another company will. Eliminating drivers will save trucking companies even more money than it will save companies like Uber — eventually reducing the cost of trucked goods.

2) Driverless technology will be ready for highways before cities

Engineering a vehicle that can drive at a constant speed on a predictable highway is a much simpler problem than designing one that can drive on city streets, which are filled with traffic lights, pedestrians, and other sudden obstacles.

That's the reason Google began is self-driving car program with experiments on highways. And the vast majority of long-haul truck miles are logged on the interstate system, making it a convenient industry to begin implementing driverless technologies — including some that are already used.

Though Google's flashy car is getting the most press, you've probably already experienced semi-autonomous driving capabilities that have been rolled out in human-operated cars: things like adaptive cruise control (which can slow you down if there's a car in front of you) and systems that alert you if you begin drifting out of your lane.

Inspiration's new truck is a combination of these existing technologies, not a fully autonomous vehicle. (The government considers it a level 3 out of 4 on its automation scale, the same as Google's current cars.) But it's an incremental step toward a future truck that might be able to operate without a driver. 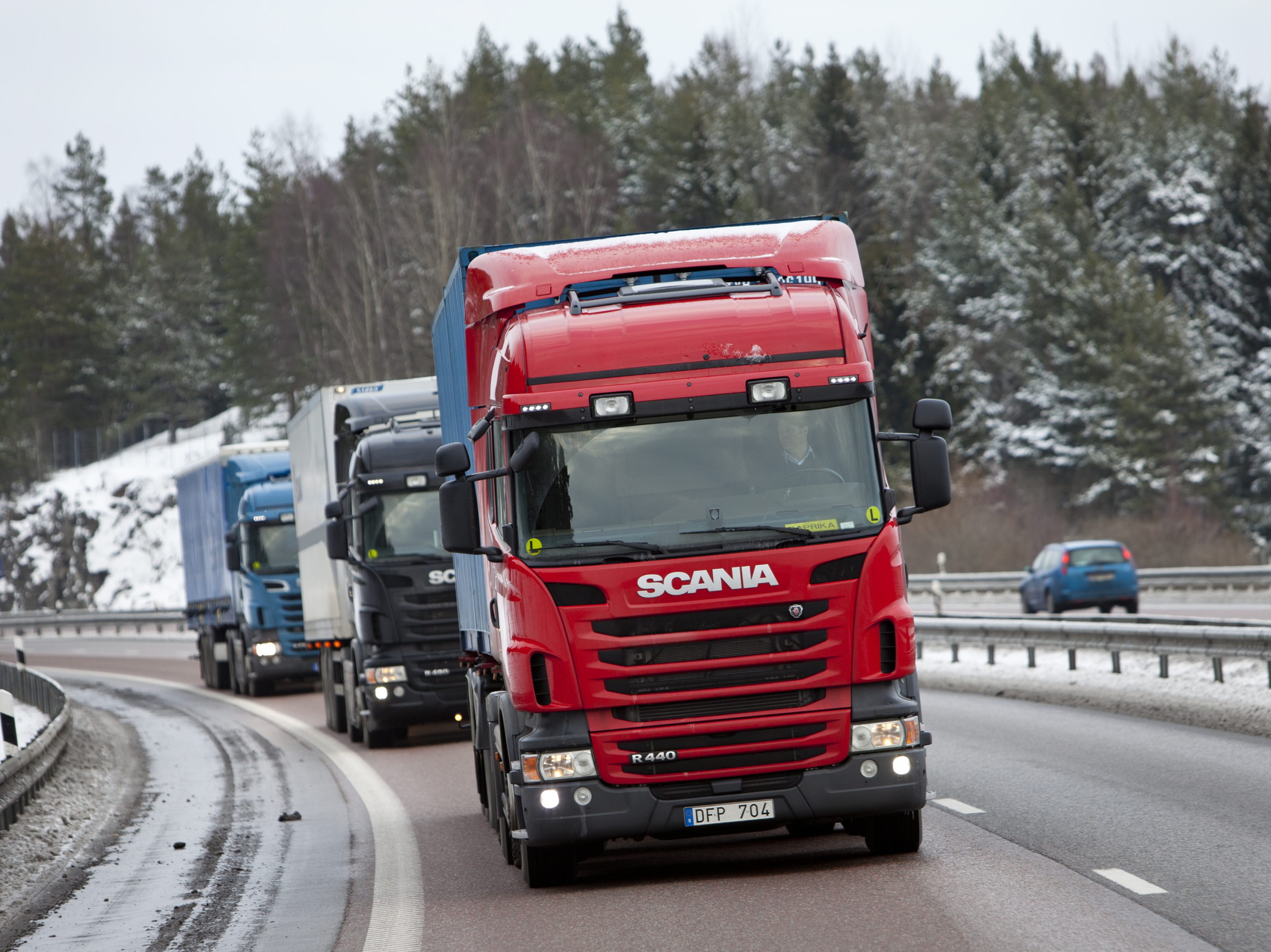 Between 20 and 40 percent of the cost of shipping something by truck goes to fuel. A large amount of this fuel is burned as the engine fights air resistance, because trailers are so boxy and un-aerodynamic. One way of cutting down on it is driving trucks in tight packs, so one can draft behind another.

It's not safe for human drivers to draft off each other in this way, because it doesn't allow for enough reaction time if the truck in front stops suddenly. But computers can do it. Recently, a few different companies have conducted experiments with a lead truck (driven by a human) and other trucks and cars that follow it (each with a human inside, but guided by computers).

Recent tests by a US company called Peloton showed that while traveling at 65 miles per hour 36 feet apart, two trucks packed together saved 7 percent on fuel. This was the average for just two trucks (the lead saved 4.5 percent, and the rear saved 10 percent), so it would increase as trains get longer.

These sorts of trains would also serve as a convenient bridge to eventually eliminating some drivers.

Initially, you could have drivers in each truck, like Freightliner is proposing. Later, before driverless trucks are ready for city streets, you could have a driver in just the lead truck, with others waiting to take them over after they exit the interstate. Eventually, you could do away with the humans altogether and save that 30 percent spent on pay.

What obstacles need to be overcome for driverless trucks 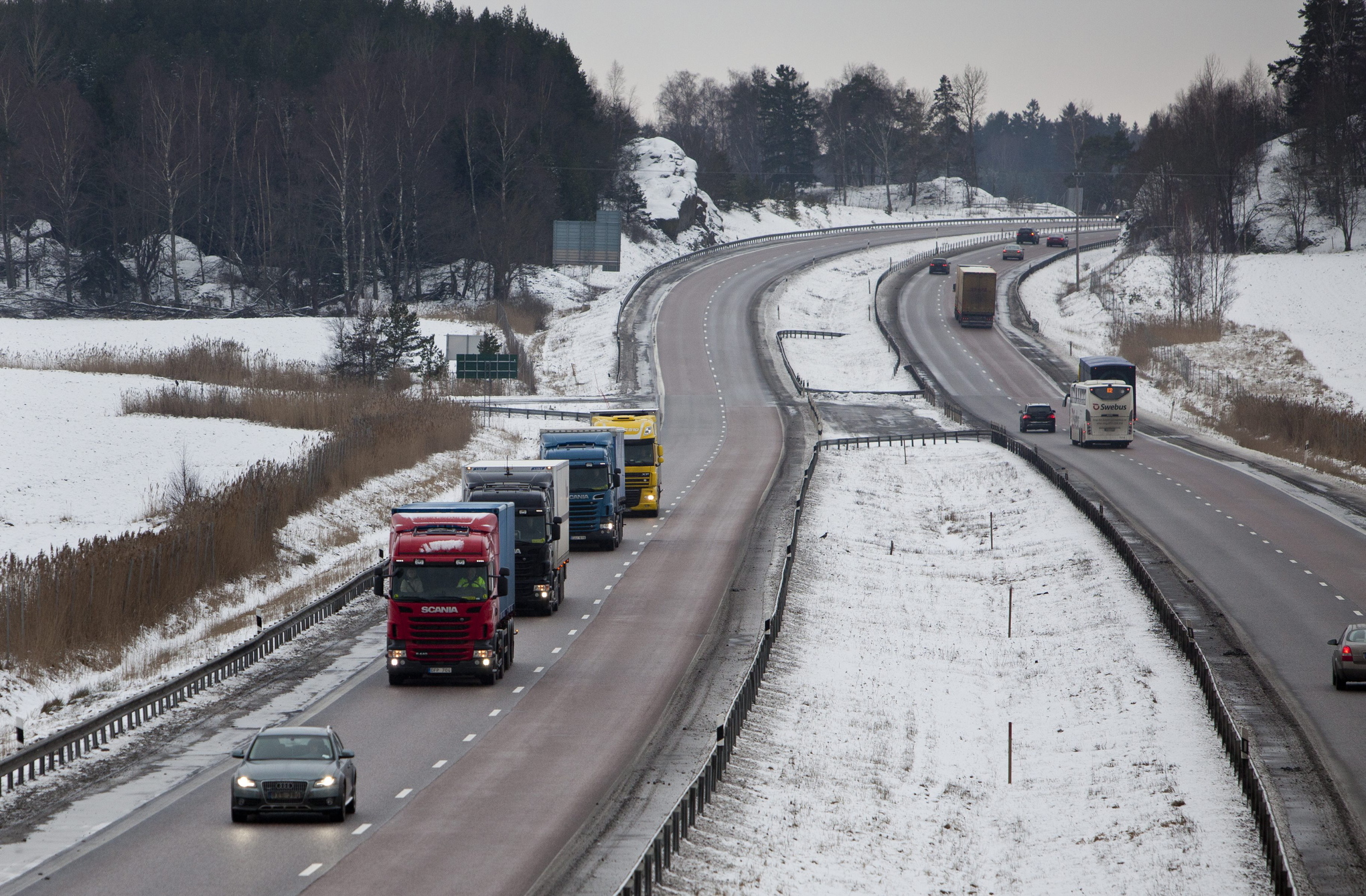 The factors that block a broad rollout of self-driving trucks fall mainly into two categories.

One is safety. People are understandably concerned about the idea of computers driving cars around on the roads, and those worries are amplified for tractor-trailers that can weigh up to 80,000 pounds when fully loaded.

But experts actually predict that automated systems will make trucking safer by eliminating distracted driving and human error. And Google's driverless cars, at least, have now gone more than 700,000 miles without an accident.

safety concerns are amplified for tractor-trailers that can weigh up to 80,000 pounds

Obviously, their safety needs to be proven before these trucks are filling the interstates. But this may be a surmountable concern, especially since the technologies can be implemented incrementally. In a sense, a single driver leading two trucks linked digitally isn't all that different from the drivers that already pull two trailers linked physically, and these convoys may gradually get people used to the idea of autonomous trucks.

The other problem is legal. Right now, just a few states (including California, Nevada, and Florida, plus DC) have laws on the books regarding driverless cars, and their legal status as a whole is murky. For driverless trucking on interstates to be practical, all states would need to explicitly allow these vehicles on public roads.

Advocates are hopeful that national legislation will solve this problem. It's all very uncertain, but in 2012, Google's Sergey Brin predicted the Department of Transportation would begin regulating autonomous vehicles nationally as early as 2017.

And it seems likely that if self-driving cars were legalized, driverless trucks — which, though heavier, would mostly operate in a simpler, more controlled environment and would be exclusively owned and maintained by professional companies — would be allowed too.