Share All sharing options for: Gwyneth Paltrow thinks you can hurt water's feelings by yelling at it

Gwyneth Paltrow loves nothing more than imparting life advice to her followers, and while that advice has dabbled in the pseudoscience before, it's rarely been as totally off the rails as the May 29th edition of her newsletter goop. Paltrow begins:

I am fascinated by the growing science behind the energy of consciousness and its effects on matter. I have long had Dr. Emoto's coffee table book on how negativity changes the structure of water, how the molecules behave differently depending on the words or music being expressed around it.

She then turns the newsletter over to her health guru, Habib Sadeghi, who continues:

Japanese scientist, Masaru Emoto performed some of the most fascinating experiments on the effect that words have on energy in the 1990’s…In his experiments, Emoto poured pure water into vials labeled with negative phrases like "I hate you" or "fear." After 24 hours, the water was frozen, and no longer crystallized under the microscope: It yielded gray, misshapen clumps instead of beautiful lace-like crystals. In contrast, Emoto placed labels that said things like "I Love You," or "Peace" on vials of polluted water, and after 24 hours, they produced gleaming, perfectly hexagonal crystals.

Masaru Emoto, the water whisperer of whom Paltrow and Sadeghi are so fond, has a bit of a following in New Age-y circles, and was featured favorably in the popular 2004 documentary What the #$*! Do We Know!?. Few scientists have tried to debunk his claims since they're so self-evidently ridiculous. "Have I tried to reproduce Mr. Emoto's experiments? No, and I don't intend to," writes Caltech physicist Kenneth Libbrecht, an expert on snow crystals. "As we liked to say back on the farm in North Dakota — it's good to have an open mind, but not so open that your brains fall out!" Libbrecht's best guess — and the logical explanation for Emoto's findings — is that he's selecting pictures of crystals that fit his findings and rejecting those that don't.

The closest replication of Emoto I found was done in Skeptical Inquirer by Carrie Poppy, who focused on an "experiment" of Emoto's wherein he poured water over cooked rice in three separate jars, one labeled "Thank You," another labeled "You're an Idiot," and a third without any label. Every day for a month, Emoto said "Thank you" and "You're an idiot" to the respective jars, and ignored the third jar. He claims that the ignored jar's rice rotted, the rice that had been thanked fermented and started to smell pleasant, and the rice in the "you're an idiot" jar turned black.

Poppy reproduced the three jars and added a fourth labeled "Michele Bachmann" at which she yelled Michele Bachmann quotes. None of them turned black. None of them rotted. All of them fermented but smelled gross. The "You're an Idiot" jar got a bit of mold, but I'm going to go out on a limb and say that was dumb luck rather than mold feeding on the rice's poor self-esteem: 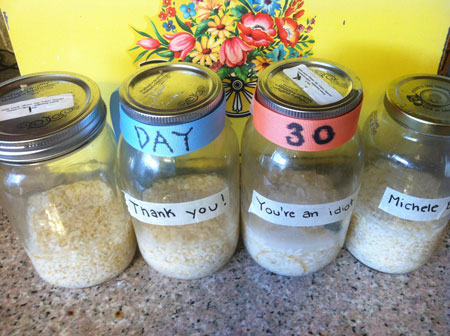 It's almost as though water is not able to read English text.

As quackery goes, Emoto isn't as dangerous as vaccine denialists or televangelist faith healers; his main takeaway from the rice experiment is that it shows you should talk to your children rather than ignoring them, a point which I didn't realize needed popularizing but is nonetheless correct. But generally speaking, endorsing and spreading nonsense is bad for the world, and given goop's reach it's unfortunate that Emoto's particular brand of nonsense is getting a hearing.

Hat-tip to Jason Kottke for finding the goop item.