Share All sharing options for: Lupita Nyong'o is going to be the first black woman in a Star Wars movie

On Monday the makers of Star Wars Episode VII announced what many fans had been wanting for a while: Lupita Nyong'o, fresh off of her Oscar win for 12 Years a Slave, would be joining the cast. "Her career momentum is restored, and her ascent to the Hollywood A-list now comes complete with an A-list project," Kyle Buchanan wrote at Vulture.

The UCLA study also found that over half  of the top films of 2011 featured casts that were 10 percent minority or less.

Nyong'o's casting is also the first time a black woman will appear in a Star Wars movie. The first time in franchise history, spanning six movies. That's something worth celebrating. But it also makes you wonder what's been going on at one of the most lucrative franchises in movie history for the last 30 or so years.

When Nyong'o and co-star John Boyega make their debuts, they will be the third and fourth black characters — Lando Calrissian (Billy Dee Williams) and Mace Windu (Samuel L. Jackson) were the only two black characters before this upcoming movie — in Star Wars history to have speaking roles.

Star Wars isn't that different from other movies

Star Wars aside, there are shockingly few roles for non-white actors in Hollywood films generally. In 2014, UCLA's Ralph Bunche Center for African American Studies studied 172 films from 2011 and found that non-white actors and actresses only commanded 10.5 percent (around 18) of the lead roles that year: 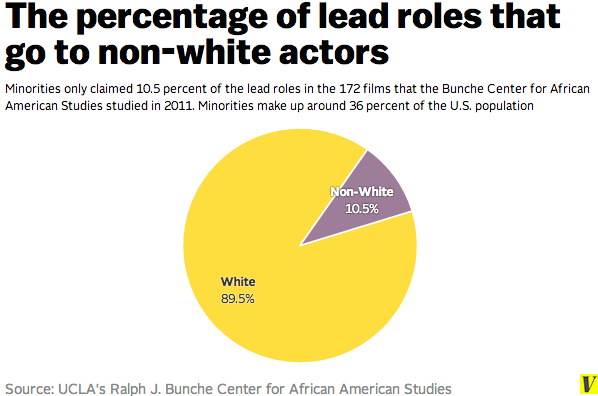 The Star Wars franchise would fit into this norm. Further, the UCLA study also found that over half (51.2 percent) of the top films of 2011 featured casts where 10 percent or fewer of the actors were non-white. And 22.1 percent of the movies featured casts that were only 11 to 20 percent non-white. Those are far below what the U.S. actually looks like, which is 36.3 non-white or multiracial.

An added frustration with the Star Wars franchise's lack of non-white characters is that it's in the sci-fi/fantasy/superhero genre. There aren't any rules or constrictions about race or gender in galaxies far, far away. And at the heart of it, Star Wars revolves around an allegory about an outsider.

Other sci-fi/fantasy/superhero franchises have traditionally challenged the way we've thought about and perceived race. Perhaps there's no better example than Star Wars's rival franchise: Star Trek. Characters like Uhura (Nichelle Nichols) and Sulu (George Takei) contributed to a vision of the future in which positions of power aren't solely held by whites. Star Wars, on the other hand, has more ewoks with speaking roles in Return of the Jedi than it does black characters with speaking roles in the entire franchise.

Perhaps the most-telling finding from the UCLA study is that studios benefit from diversity. The study states that non-whites account for 44.1 percent of frequent moviegoers (a figure higher than the percentage of the U.S. population they represent), and it found that films which had casts that were more well-balanced posted a higher median of global box office sales.

Nyong'o's casting is a historic move for this behemoth of a franchise. It's a sign that the team there knows it can do better than the movies before it. Let's just hope that it doesn't stop here.