In a report released late Friday, Deputy White House Chief of Staff Rob Nabors detailed several problems uncovered during his probe into the US Department of Veterans Affairs and its health-care system. Here are its basic conclusions: 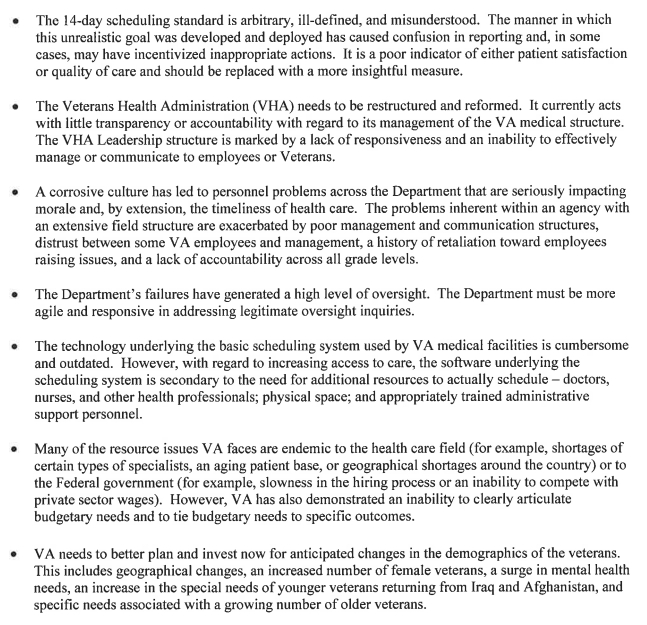 The White House's probe touches on the three big causes of the scandal: the VA's lack of adequate resources, poor oversight and accountability, and misguided quality metrics. Those issues have been noted in Government Accountability Office reports, papers in the New England Journal of Medicine, and other official investigations.

The scandal "can generate political pressure to fix the problems"

Colin Moore, a University of Hawaii professor who's studied the history of the VA, says the report addresses some of the system's major issues, but "there's nothing really new here."

Several problems noted in the White House's report are already being worked on by regulators and lawmakers. The VA already pledged to scrap the unrealistic 14-day scheduling goal and conduct monthly inspections of scheduling practices at VA facilities. Both chambers of Congress, meanwhile, are in conference to compromise on different proposals that would help the VA hire more doctors and outsource some care to private medical providers. The White House, for its part, plans to keep Nabors at the VA to oversee the agency's ongoing changes.

The lack of new information speaks to a deeper problem. As the White House's report notes, the VA's inspector general and Government Accountability Office have been reporting problems with the VA's scheduling system since as far back as 2005. That's nine years of little-to-no action.

"Most of the people who followed the VA had some idea this was going on, although it was worse than we realized," Moore says. "At least one thing with the scandal, it can generate political pressure to fix the problems."