How to impeach a president

Share All sharing options for: How to impeach a president

A large majority of Republican voters believes Congress would be justified in impeaching President Obama, according to a new poll by YouGov. The poll found 35 percent of the public — and 68 percent of Republican voters — supporting impeachment. By an 89-6 margin, GOP voters thought Obama had "exceeded the limits of authority granted a President by the US Constitution." The numbers are similar to a 2007 poll in which 36 percent of the public, and 54 percent of Democrats, wanted an impeachment inquiry against President Bush.

It's only the latest example that parts of the conservative base are now yearning for impeachment. In June, the South Dakota Republican Party voted to call for it, in what seems to be the first official adoption of impeachment as policy by a state GOP organization. And last week, Sarah Palin wrote not only that Obama should be impeached, but that "we should vehemently oppose any politician on the left or right who would hesitate in voting for articles of impeachment."

Since Republican leaders aren't on board — preferring instead to sue Obama because he won't enforce Obamacare's employer mandate — impeachment seems unlikely to actually happen unless some major new scandal emerges. But — just in case — here's how the process actually works.

What can the president be impeached for? 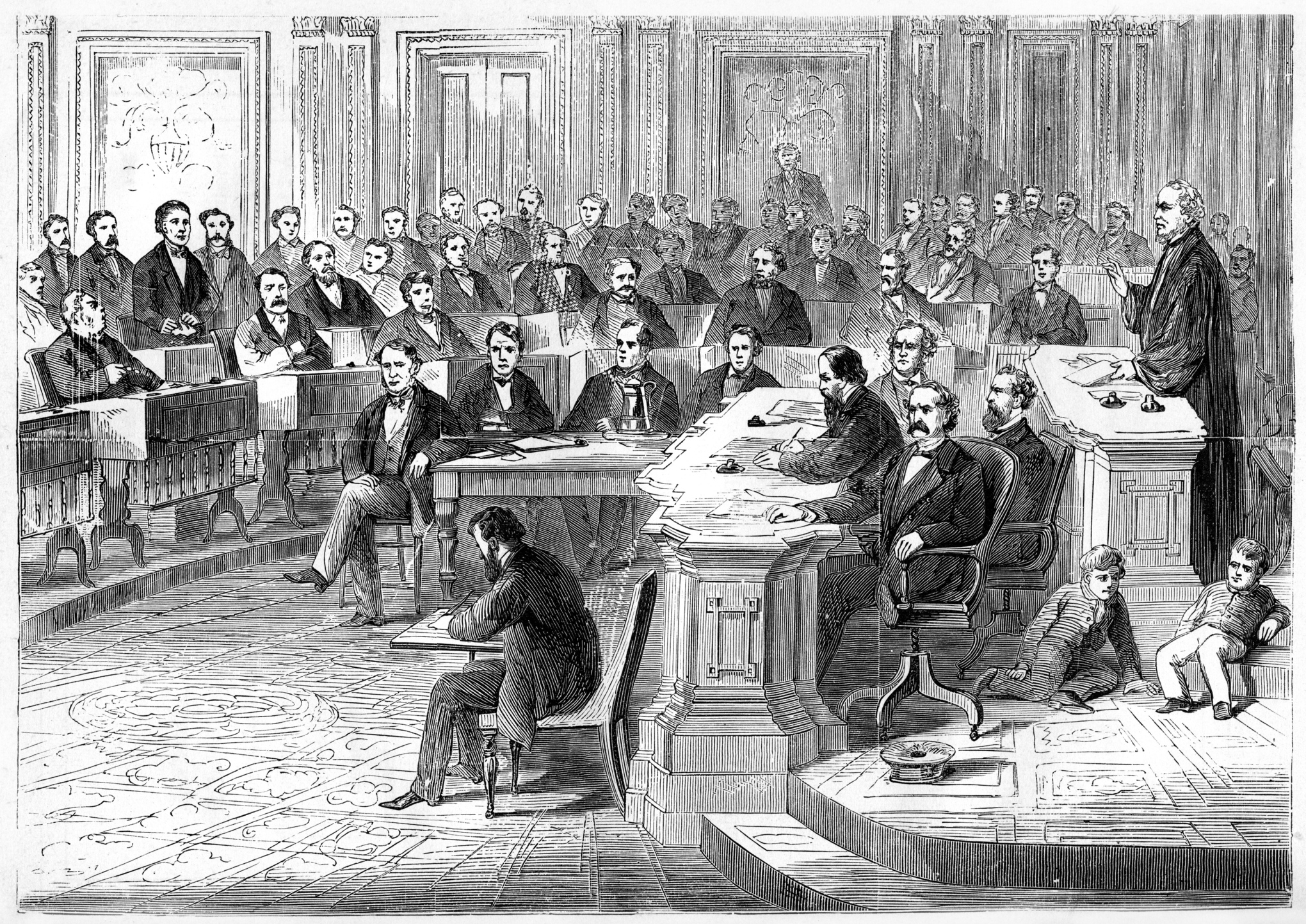 The Constitution says that the president can be removed from office for "treason, bribery, or other high crimes and misdemeanors." But many have argued that the definition of "high crimes and misdemeanors" is really up to the House to decide. When Gerald Ford was House Minority Leader, he said, "An impeachable offense is whatever a majority of the House of Representatives considers it to be at a given moment in history." And as a practical matter, he's absolutely right. If the House wants to vote to impeach the president, it doesn't seem that anyone can stop it from doing so — the Constitution says it has "the sole Power of Impeachment."

However, in our two 20th-century examples where Congress seriously weighed impeachment — for Richard Nixon and Bill Clinton — they did so only after dramatic revelations from preexisting investigations. For Nixon, a select Senate committee had been investigating his campaign's potential involvement in the Watergate break-ins, leading to the sensational revelation of a White House taping system and Nixon's firing of special prosecutor Archibald Cox. For Clinton, independent counsel Ken Starr had been operating a years-long investigation into various sprawling matters, until he finally filed a report alleging that Clinton had lied under oath and obstructed justice to prevent his affair with Monica Lewinsky from becoming known. So would-be impeachers have needed some body to build their case first — such as, for instance, a select committee on Benghazi. 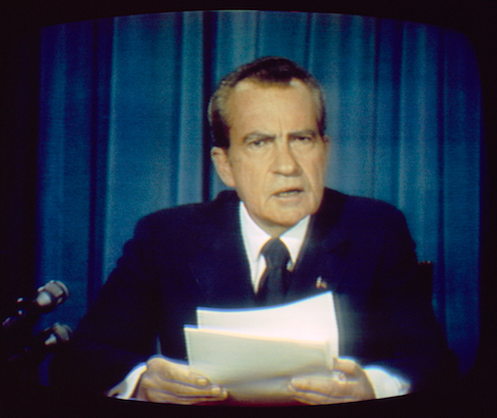 The specifics of proceedings are up to the House of Representatives. For both Nixon and Clinton, the full chamber voted to refer the matter to the House Judiciary Committee, which would draft impeachment articles and vote on whether to send them to the House floor. For Nixon, the committee held various investigatory hearings, including witness testimony, and eventually approved three articles of impeachment — but before the House could vote on them, Nixon resigned.

At first, there was no consensus on what high crimes Johnson had committed

For Clinton, the Judiciary Committee decided not to conduct its own investigation, but rather to just vote on allegations drawn from the Starr report. It drafted four impeachment articles, and voted to send them all to the House floor. A week later, the full House of Representatives approved two of those articles — officially impeaching Clinton. Only a simple majority vote is needed to impeach.

The 1868 impeachment of President Andrew Johnson unfolded somewhat differently. There was no outside investigation, but rather a years-long backdrop of increasing tensions between Johnson and House Republicans over Reconstruction. The House first considered whether to impeach Johnson in December 1867, but voted against it — there was no consensus on what particular high crimes Johnson had committed. But shortly afterward, Johnson fired his Secretary of War — despite a Constitutionally-dubious law Congress had passed in 1867 that restricted him from doing so (the law was later repealed). So a special House committee on Reconstruction quickly recommended impeachment, and the full House voted overwhelmingly to impeach two days later, without any specific charges yet being drawn up. After that, the House drafted 11 articles of impeachment, and voted to approve them.

After impeachment, what happens in the Senate? 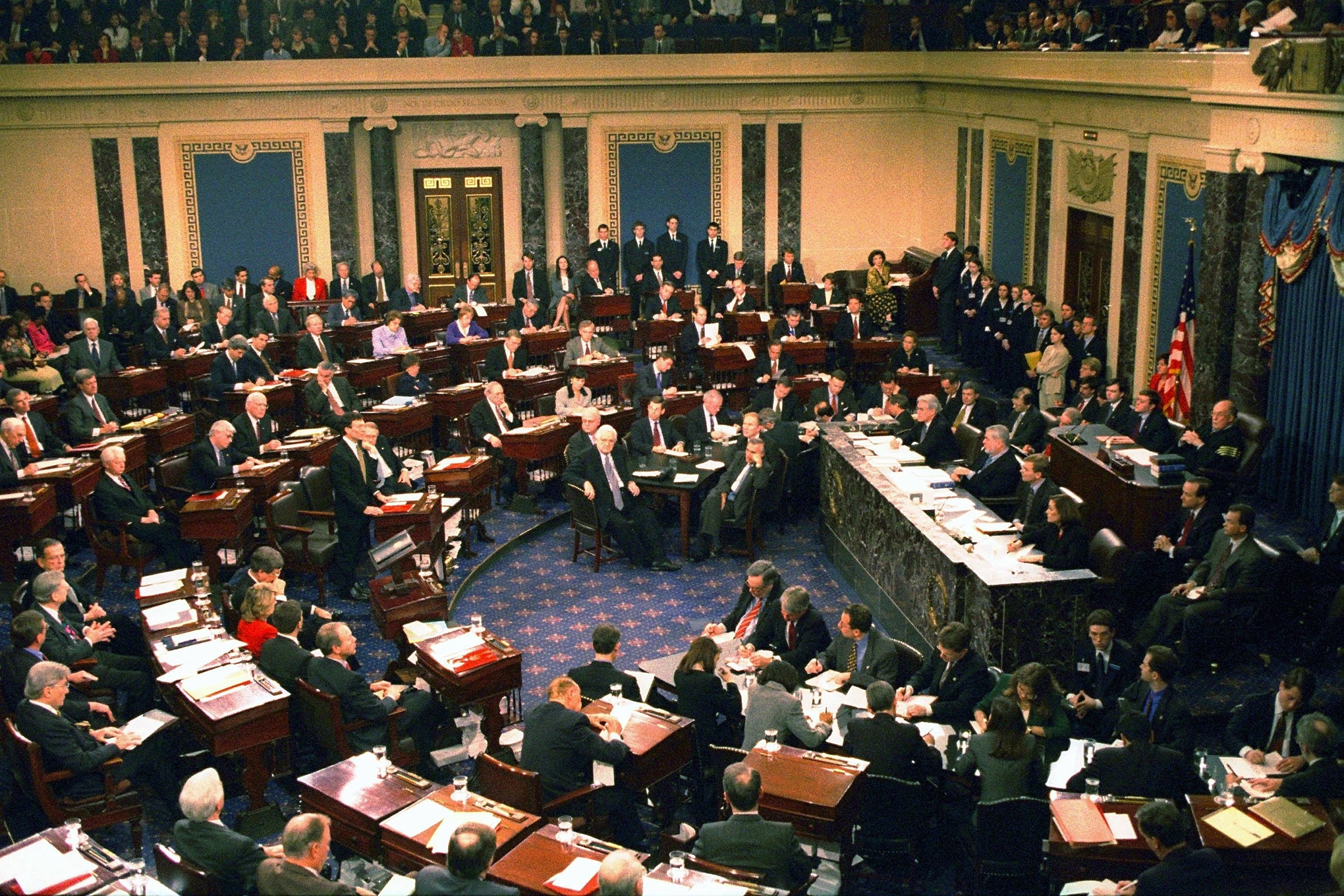 The Senate votes on whether to remove President Clinton from office, February 1999. Photo: AFP

The action then moves to the Senate, where a trial takes place, presided over by the chief justice of the Supreme Court. The House of Representatives acts as a prosecutor — designating certain impeachment managers to argue their side in the Senate. The president does not have to appear in person, and historically has not, instead designating a team to argue in his defense.

The Senate gets to decide on how the trial is conducted

The Senate is, effectively, the jury — but it also gets to decide how the trial is conducted. In 1999, it decided on a target end date for the trial, whether to allow House prosecutors to depose witnesses (the House wanted to depose 15, the Senate let them depose 3), and whether to hear live witness testimony (it decided not to). It can make these decisions either through unanimous consent, or by voting on a proposal put forth by Senate leadership. And, at the end of the trial, it must vote on whether to convict or acquit the president on each article of impeachment. A two-thirds vote is necessary for conviction, and would remove the president from office. But the Senate voted to acquit both Johnson and Clinton on every count.

What are the implications for Obama?

Both Johnson and Clinton faced a Senate controlled by political enemies — so when the House voted to impeach, the Senate took the accusations seriously, and proceeded to weigh the accusations over a weeks-long trial. But if House Republicans decided to impeach today, with accusations that Senate Democrats considered obviously frivolous, the Senate would probably schedule a very short trial and vote to acquit Obama very quickly. "With Harry Reid and the Democrats controlling the Senate, it can't succeed," Senator Ted Cruz has said.

Even if the GOP did retake the Senate this fall, it would still be an incredibly heavy lift for them to get the 67 votes necessary to remove Obama from office. When conservative Congressmen are asked about impeachment by their constituents, this is how they justify not going for it. "If we were to impeach the president tomorrow, you could probably get the votes in the House of Representatives to do it. But it would go to the Senate and he wouldn't be convicted," said Rep. Blake Fahrenthold (R-TX) last year. And, it seems, that's where the matter will stand. For now.