It was 100 years ago today that Archduke Franz Ferdinand — heir to the House of Habsburg and presumptive future ruler of the Austro-Hungarian Empire — was assassinated on the streets of Sarajevo touching off the first world war. 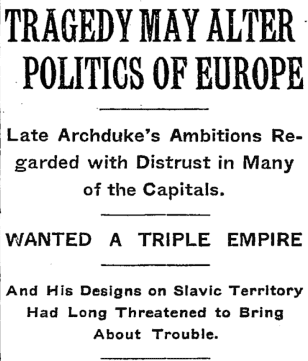 This was apparently the era before clickbait headlines, because The New York Times' news analysis told us "Tragedy May Alter Politics of Europe."

What's more, in an excellent demonstration of the fact that journalism is really hard and past events were less predictable than they seem in retrospect, the analysis of how the assassination would alter the politics of Europe was completely wrong.

The Times reported that "in Russia, England, and France the Archduke Francis Ferdinand was regarded as one of the most serious dangers to the European peace" while "even in Germany his accession to the throne was viewed with apprehension." Their view was that Franz Ferdinand was a proponent of an aggressively anti-Serbian foreign policy, and that his removal from the order of succession made a Balkan conflict less likely.

By contrast, the new heir apparent, "while popular in Vienna is described as a young man of no remarkable ability."

The Times did, however, also feature a small aggregation story from Paris rounding out up the French press' analysis of the situation. This was considerably more accurate than the original story, noting that in France "several journals express the fear that the consequences will be sufficiently serious again to plunge the Balkans, if not Europe, into a conflict. "

Last, because nothing ever changes, there was an advertisement related to a new employer insurance mandate.