Book revenues are up — but without ebooks, they'd be plummeting

Share All sharing options for: Book revenues are up — but without ebooks, they'd be plummeting

The state of the book is in constant danger. The novel is constantly dying, and there is a fear that the publishing industry in general is maybe doomed. But if there's one sector of the publishing industry that's alive and well, it's e-books. According to data released this week by the Association of American Publishers (AAP), e-book sales continued a steady rise in 2013.

Data around book sales and reading is notoriously muddy. There is no comprehensive data collected and published on how many books are sold in the United States, print, e-book, or combined. Major retailers, like Barnes & Noble and Amazon, release their sales figures for print books, but do not share how many e-books they are selling.

AAP reports the revenue made by major book publishers. For e-books, since there is almost no overhead as there is with physical books (for covers, and printing, and shipping) the revenue reported is approximately equal to the e-books sold.

E-books have come to prominence quickly in the book publishing world. Publishers started reporting data on e-books in 2008, one year after the release of the first Amazon Kindle. In 2008, e-books were still in their nascent phase. They were so new, they were still outsold by audiobooks. 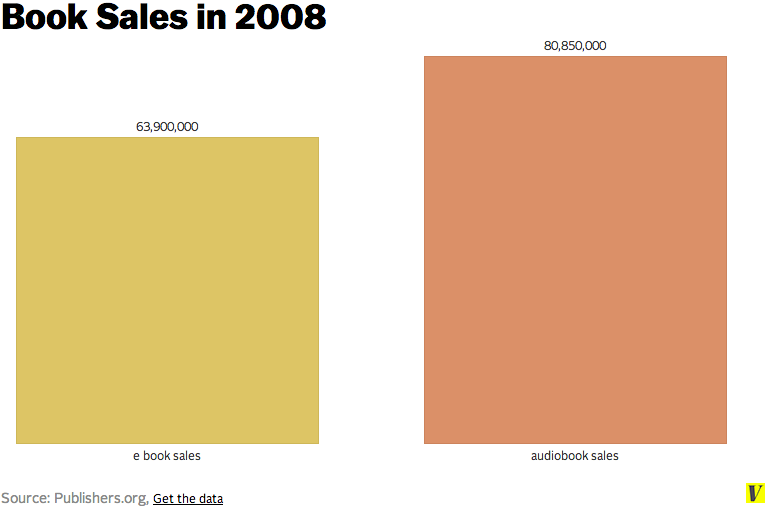 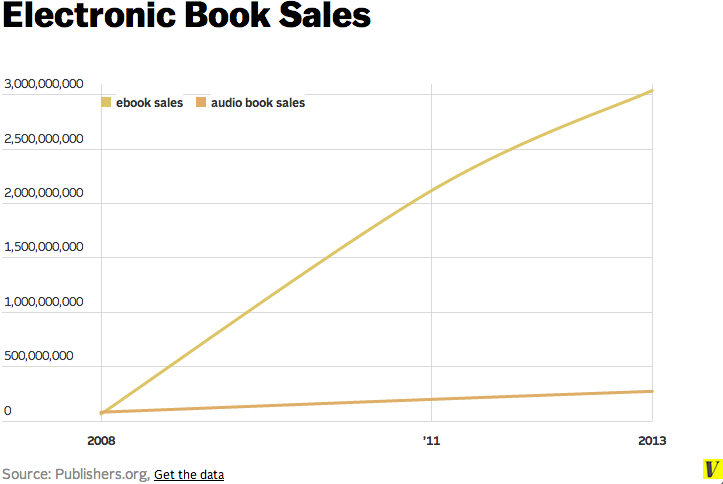 The massive jump in electronic book sales from 2008 to 2013 is due, at least in part, to the rise in popularity of e-readers, like the Amazon Kindle, and tablet computers. Since 2007, e-reader design has improved. The models got thinner, could hold more books, and could download books from anywhere. The newer models will even let you read in the dark.

The Pew Research Center started collecting data on e-readers in 2010 when Apple released the first generation of the iPad and tablets started to take off. Pewfound that while 85% of Americans owned a cell phone, only 5% of Americans owned an e-reader and 4% owned a tablet. With tablet computers rising, and e-readers getting thinner and thinner, e-book sales skyrocketed. In the first six months of 2011, e-reader ownership doubled.

Today, 90% of Americans own a cellphone, 32% own an e-reader, and 42% own a tablet. This is important because most e-book consumption happens on those two devices. More than 50% of readers said that they read e-books on tablets or e-readers. 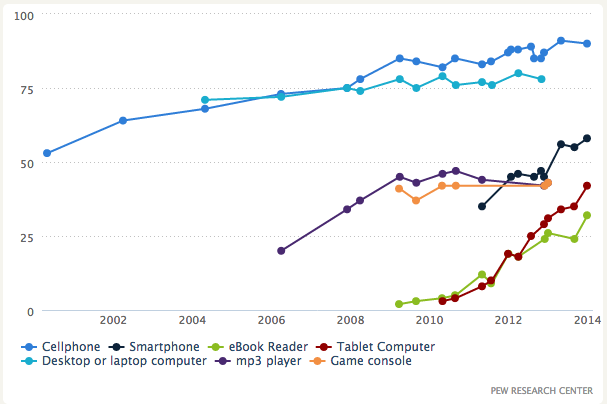 Reading electronically is becoming more and more common. A 2012 Pew report found that almost a quarter of Americans said they had read an e-book in the past year. The e-reader population is one of the fastest growing sectors in publishing. From 2011 to 2012, the share of people reading books electronically jumped from 16% to 23%.

Though e-readers are growing in popularity, they're not overtaking print, and they show no signs of doing so. Of the adults surveyed by Pew that read more than one book in 2012, only 5% of them read only an e-book. Americans still like their books on paper between real cardboard covers and stacked on a shelf.

But the trendlines are negative for print. The data about e-book sales and print sales are never fully clear. Total book sales in 2013 was almost $15 billion, according to the Associations of American Publishers. That's an 14% increase since 2008. E-books accounted for $3 billion. If we took e-books out, print book sales would, in fact, be down almost 8% since 2008.

Even these numbers of book sales underestimate the profit e-books are making because they fail to include the revenue made from self-published books, because Amazon does not disclose those statistics. Ultimately, e-books have the potential to rewrite the current publishing model. Their impact on sales shows no signs of slowing, and while that may not be good news for independent book stores, it's great news for reading.