Take a wild guess what happened to the use of the word "Nazi" on Twitter during Thursday's World Cup match between Germany and the United States. Just guess.

Between the 11:35 a.m. (roughly 25 minutes or so prior to the game) and 2:03 p.m. tweets that contained the word "Nazi" or "Nazis" at a rate of 3.4 tweets per second. Deadspin's Reuben Fischer-Baum used a script and graphed out when Twitter hit peak Nazi: 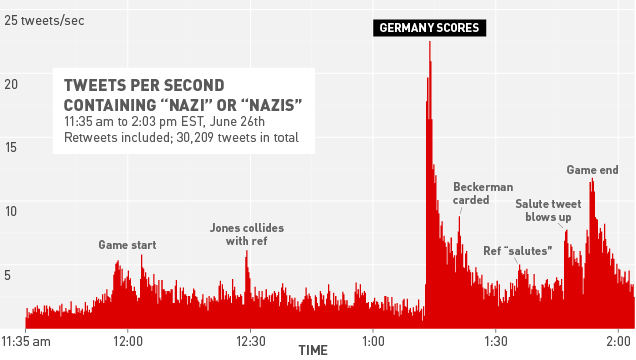 You'll notice the tweets spiked when Germany's Thomas Müeller scored. Further, if you run a search on Topsy, an organization that aggregates Tweets/Twitter data, you'll notice that there are more "Nazi" tweets in the last two days than there have been in a month. Some of that is due to a Nazi-themed political campaign video from Indonesia that went viral, but over 43,000 "Nazi" tweets were tweeted on the day of the match:

The U.S. plays Belgium on July 1, so get your jokes about waffles and the crippling French-Flemish linguistic divide ready.