Hardcore conservatives agree with liberals on a lot. They just don’t want to compromise.

Share All sharing options for: Hardcore conservatives agree with liberals on a lot. They just don’t want to compromise.

The most important conflict in American politics right now isn't ideological. It's operational. It's about whether politicians should bend their principles and compromise to get things done — or whether that's a dangerous, "business-as-usual" approach at a time when America is in crisis.

The conflict is located in the Republican Party, and it's centered in the House Republican Conference. The disagreements between the various factions of House Republicans are modest: they all want Obamacare repealed, and spending cut, and taxes lowered, and the deficit reduced, and the Obama administration out of office.

But the disagreements on how to achieve those goals are vast: some Republicans would willingly raise taxes a bit if they could get much more than that in spending cuts. Others are repelled by the idea of policy concessions and have argued instead that the GOP should shut down the government or breach the debt ceiling unless the Obama administration gives into their policy demands.

"The differences between the Tea Party and 'establishment Republicans' have largely concerned style and attitude rather than program and ideology," wrote Ramesh Ponnuru.

A vast new survey from Pew sheds considerable light on this debate. Pew persuaded thousands of Americans to answer a battery of questions about what they believe and used the results to sort them into seven different political camps. The result is an unusually detailed look at the deep fissures within the two major political coalitions.

One of the fascinating findings is that only one of the seven groups — the "steadfast conservatives" — says they prefer politicians to stick to their positions rather than compromise: 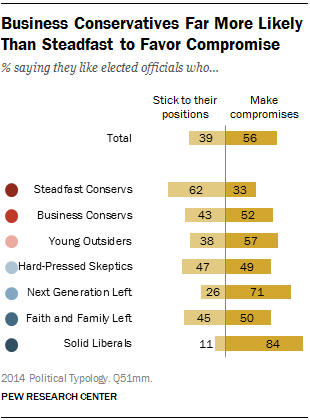 Thus far, though, the Republican Party has somewhat uncomfortably adopted the positions of the business conservatives and the political style of the steadfast conservatives. The result is a congressional coalition where the votes exist for immigration reform but the compromises required to pass it are too politically dangerous, and where Wall Street is unpopular but where there's no chance of Republicans joining Democrats to impose stricter regulations on financiers.

But it's not clear how long these dueling impulses can exist within the same political coalition. Eric Cantor tried harder than anyone to satisfy both sides and ended up losing to a more steadfastly conservative primary challenger.