The Republican debate on Common Core is over

Share All sharing options for: The Republican debate on Common Core is over

The big political narrative around the Common Core this summer is that the national education standards pit Republicans against Republicans.

Jeb Bush, Chris Christie and the Chamber of Commerce support the standards. The Tea Party decries them as "Obamacore." Louisiana Gov. Bobby Jindal, a onetime supporter of the standards, has turned against them; Jindal's top education official, a high-profile education reformer, still supports them. 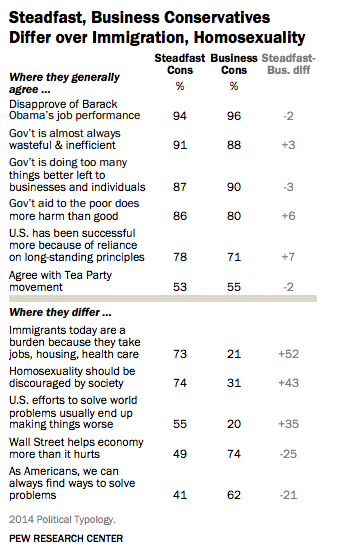 But the Pew Research Center's recent profile of American political views destroys the assumption that these divides mean the Common Core is contentious among Republican voters. Business-friendly conservatives (the establishment base) and cultural conservatives (the tea party base) who know about the standards oppose them at identical levels.

Supporters might hope otherwise, but the fight in the Republican Party is over and the standards have lost.

Pew divided the anchors of the Republican party into two groups in its new report on Americans' political beliefs. They call those groups steadfast conservatives and business conservatives, but they could just as easily call them tea party Republicans (religious, culturally conservative, angry at the federal government) and country club Republicans (wealthy, pro-Wall Street suburbanites).

The findings on the two groups' beliefs back up much of the establishment-versus-insurgency narrative. They disagree on immigration, on foreign affairs, on homosexuality, and on whether what's good for Wall Street is good for America. 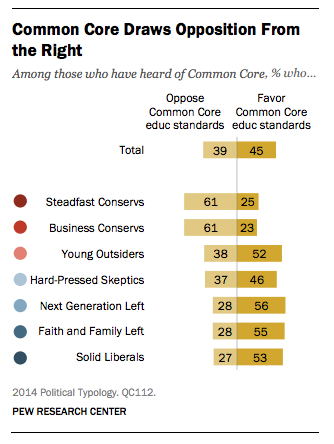 But they agree on Common Core, identically: 61 percent of both groups oppose the standards.

This is a huge failure for the US Chamber of Commerce. The group spent much of the past year making a case for the standards from a business perspective.

The chamber argued that high, uniform expectations in math and language arts will produce better workers and a stronger economy. They made slick videos. They published op-eds. Yet they failed to convince even their core constituency — business conservatives.

One possible explanation is that steadfast conservatives are more likely to have heard of Common Core, period. This was plausible last year; opposing the standards was a cause célèbre for Glenn Beck long before most Americans had heard about them, and supporters — which include some conservative groups — assumed they just needed to make their case too.

But 59 percent of Americans in the Pew survey now say they've heard at least a little about Common Core. It's unlikely that business conservatives are the exception; the survey found they were more likely than steadfast conservatives to know basic facts about current events and to discuss national issues with their friends.

Familiarity appears to have bred contempt.

Instead, the standards are seen as yet another facet of Washington run amok. The responses on the Common Core questions look like those to other questions about the proper size and role of government — questions that brought business and steadfast conservatives together.

This is very bad news for the standards' supporters. Right-leaning supporters of Common Core say the standards are a state issue, created for states and by states (and that they wish Education Secretary Arne Duncan would stop talking about them). Opponents argue that the US Education Department's efforts to get states to adopt the standards are an example of federal overreach.

Pew makes it clear: The opponents won. No matter how much supporters talk about state-led initiatives, the standards have been defined.

That doesn't mean Jeb Bush's Common Core support will derail his national aspirations. Pew found the former Florida governor is broadly popular among both business conservatives (63 percent favorability) and steadfast conservatives (60 percent favorability). John McCain and Mitt Romney, among others, could tell you that a candidate doesn't need to agree with his party on everything to win the nomination.

But now Bush's support for the Common Core can't be waved away as picking a side in an active intraparty controversy. Bush is backing an initiative that his party broadly opposes. Jindal didn't turn on the Common Core to burnish his credentials with the most conservative Republicans. He did it to win over the mainstream.