Share All sharing options for: How viruses stay one step ahead of our efforts to kill them

If there's one thing that makes viruses so tricky to deal with, it's that they evolve so quickly. This year's seasonal flu vaccine might not be useful next year. And the fast evolution of HIV has kept it one step ahead of potential cures ever since we've discovered it. And then there are all these viruses in animals — like bird flu, swine flu, and now MERS — that have evolved the ability to hop into people.

So why do viruses evolve so rapidly?

First, a note of caution. Microbes are varied, and nature has many exceptions. Answering this question in any cogent manner requires talking in generalities, but there's always variety. Here goes:

The major reason that viruses evolve faster than say, mosquitoes or snakes or bed bugs, is because they multiply faster than other organisms. And that means every new individual is an opportunity for new mutations as they make a copy of their genetic material.

Many of those mutations have no noticeable effect. But every once in a while, one might help the organism survive — for example, by letting viruses infect not just birds, but people, too.

Even among viruses, though, there's a wide variation in mutation rates. HIV, for example, is a very fast mutator. That's because it multiplies especially rapidly — one virus particle will produce about 10 million viruses within 24 hours. What's more, HIV's genetic material is not DNA, but RNA, which is more likely to develop mutations when copied.

Other fast mutators include coronaviruses like MERS and SARS. Influenza viruses are fairly fast mutators, although that varies from strain to strain. That's one reason why flu vaccines are often only effective for a short while.

But many other viruses are more stable — like the measles virus. That's why you're protected against the measles today even if you got vaccinated as a child decades ago.

Once a virus is circulating among human beings, their environment is us. That means that every random mutation that viruses make is another chance that they could better adapt to us. And the ones with the most adaptive features will survive and multiply.

That's why some viruses, like Swine flu, have gotten more dangerous over time and developed the ability to jump from person to person. But then again, this doesn't always happen — it's a game of chance. Some viruses that people are watching closely for some time haven't developed this ability. H5N1 avian flu is still in this category, and let's hope it stays that way.

Adaptation to people is one reason why controlling emerging infectious diseases like swine flu and MERS is so important. The longer they circulate among people, the longer they have to evolve adaptations that are more advantageous to them — and more dangerous to us.

Bacteria evolve fairly quickly, too — and we're helping them do it faster 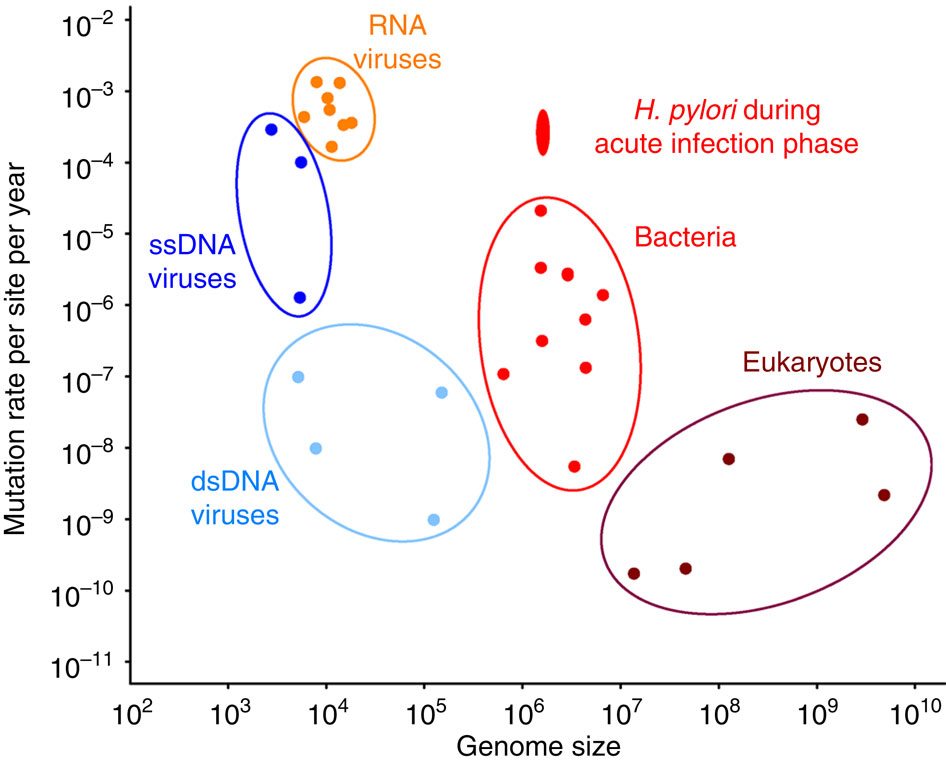 Bacteria multiply quickly, but not as quickly as some viruses, as you can see from this chart. "In general, viruses like HIV replicate more more rapidly than do bacteria like Streptococcus," Fauci says. (Streptococcus bacteria include things like pneumonia.)

Here, too, there's a lot of variation. For example, a population of E. coli bacteria will mutate at about one-tenth the rate of Herpes viruses and about one-thousandth the rate of coronaviruses like SARS and MERS.

But there's a twist: When we start overusing antibiotics to kill bacteria, that can actually speed up the process of evolution. "Bacteria tend more to become resistant when you perturb them as opposed to naturally spontaneous mainly because they don't replicate as rapidly as viruses," Fauci says.

When people overuse and misuse antibiotic drugs, they kill off bacteria that are susceptible to the drugs while leaving the stronger ones behind. Then those grow and multiply. Essentially, we are making bacteria evolve to become deadlier and more difficult to treat. In other words, it's not them, it's us.

These specially evolved bacteria are becoming a huge problem. Antibiotic-resistant infections currently kill 23,000 Americans each year. And new drugs to replace them aren't coming out like they used to either. The World Health Organization warned that we could be headed for a post-antibiotic era unless things shape up fast.