Share All sharing options for: Excessive drinking causes 1 in 10 deaths among working-age adults

Excessive drinking causes nearly 1 in 10 deaths among working-age adults, according to a new study from the Centers of Disease Control and Prevention.

The study, which analyzed data from 2006 through 2010, linked alcohol to 3.6 percent of all deaths in the US. There were 88,000 deaths per year during that time span, with 69 percent of alcohol-attributable deaths occurring among working-age adults (ages 20 to 64).

On average, excess drinking shortened the lives of those who died by 30 years.

The death toll varies across different states. In New Mexico, 16.4 percent of deaths among working-age adults are linked to alcohol. In Maryland, the rate is only 7.5 percent. 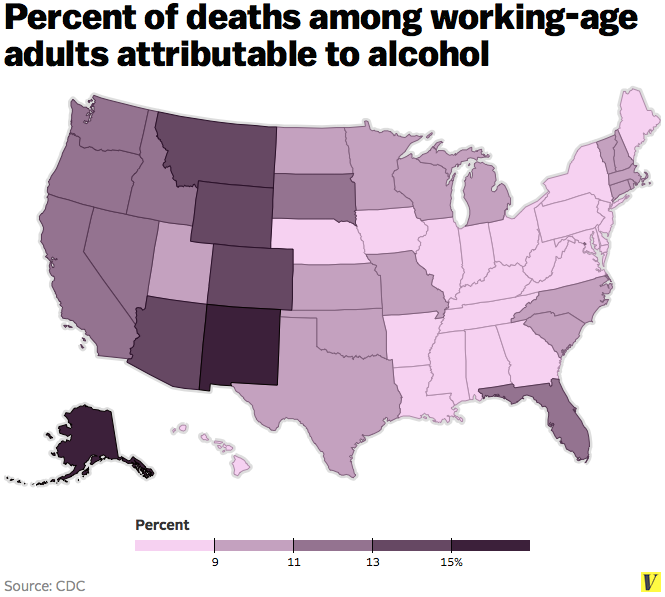 Excessive drinking is the fourth leading preventable cause of death in the US. Too much alcohol consumption is linked to various chronic and acute causes of death, including liver damage, fetal alcohol syndrome, alcohol poisoning, car accidents, and firearm injuries.

In addition to the tragic loss of life, the premature deaths impose major economic costs through losses in productivity and potential earnings. In 2006 alone, the CDC estimates excessive drinking cost $223.5 billion.

A few caveats to the study: The data is based on conservative estimates and self-reports, so it may underestimate the prevalence of excessive drinking. The study also might not catch some alcohol-attributable deaths among former drinkers, because they reported no longer drinking at the time of their deaths.

Still, the high death toll is a major concern for criminologists and health experts alike. It's why many of them support a higher alcohol tax to discourage excessive drinking.