On Thursday, political geeks rejoiced when the Pew Research Center released its 2014 study on Americans' political ideology. Pew's analysis stands out from standard polls because it doesn't just sort Americans by demographic factors like age, race, and gender. Instead it asks respondents a series of questions designed to sort them by ideology. Respondents have a stark choice between two very different options, as you can see below:

Though the actual survey respondents could also answer "don't know," it's true that this format doesn't allow for much moderation or nuance. But that's what happens in American politics — you have to choose between two alternatives, not some fantasy third one. Here, you have to pick the statement you agree with most — or, which one you're least repelled by.

After asking 23 of these ideological questions, Pew examined how various views clustered among respondents so they could sort them into distinct groups. Now, there are other potential ways to sort their results — this is Pew's particular interpretation of the data, and you can read more about their methodology here. But a look at their clusters helps show us how our major ideological coalitions are divided.

1) Some liberals are much less concerned about racial discrimination 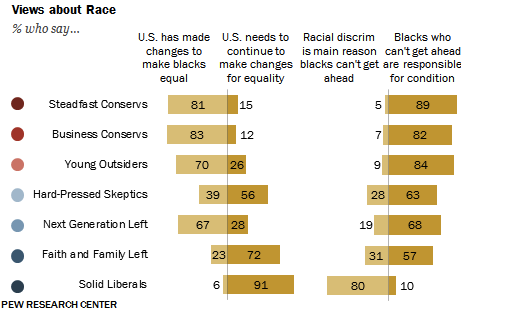 Pew argues that we should think of the Democratic coalition as having a core of solid liberals — plus two other somewhat more moderate clusters that agree with liberals on most issues, but have very different views on a few. The first of these clusters is "The Next Generation Left." Though the group skews younger than any other group in the survey, don't interpret it as representing the views of young liberals — only 33% of the group is under 30 years old. Instead, it's a group of mostly-Obama supporting people who are liberal on most economic, social, and foreign policy issues — but seem to have some very different views on race, the safety net, and how fair America is.

Overall, the Next Generation Left are far more likely than solid liberals to agree that most people can get ahead if they're willing to work hard, and far less likely to believe that racial discrimination is the main reason blacks can't get ahead. Most of them agree, instead, with the statement that blacks who can't get ahead are responsible for their own condition. Ta-Nehisi Coates touched on this divide recently, writing that "Obama-era progressives view white supremacy as something awful that happened in the past," but "I view white supremacy as one of the central organizing forces in American life." 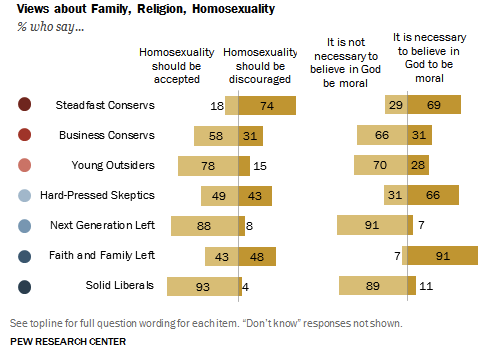 Then there's "The Faith and Family Left" — which is the most racially diverse of the left-leaning groups, at 59 percent nonwhite. This group overwhelmingly thinks that it's necessary to believe in God to be moral, and is split down the middle on whether homosexuality should be accepted or discouraged. And like the Next Generation Left, they overwhelmingly believe that you can get ahead in America if you work hard.

These divides on particular issues don't mean that the Democratic Party is in trouble — it remains quite united on the vast majority of issues. And in part, it is so because leading Democratic politicians have been adept at appealing to these less liberal groups. As Coates has written, even when Obama speaks to black audiences he emphasizes personal responsibility and optimism, in language not so different from Paul Ryan's. And most leading Democratic politicians would never be caught dead trashing religion — except, perhaps, when they think they're in private.

3) Core GOP voters are split between business and populist factions 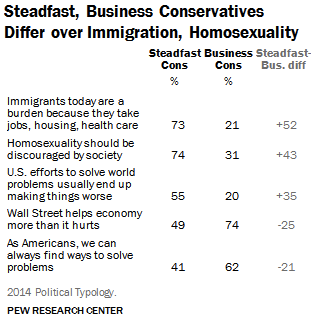 The conventional wisdom is that the Republican Party is split between an establishment, business-supported faction and a more grassroots, populist faction. According to Pew, that's absolutely right. Both groups strongly distrust the government and are suspicious of the safety social net, but they split on social issues and some matters involving big business.
Steadfast Conservatives — Pew's term for the more populist group — view immigrants as a burden, think homosexuality should be discouraged by society, and are suspicious of corporate power. In contrast, Business Conservatives are more socially liberal, supportive of immigration, and are much more favorable toward Wall Street and large corporations. For instance, 71 percent of Steadfast Conservatives think too much power is in the hands of large companies, but only 35 percent of Business Conservatives agree. 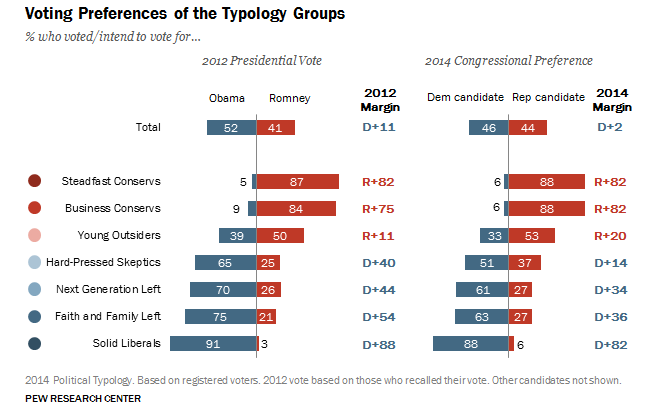 Beyond the core supporters of each party, Pew creates two more groups that are much more closely divided. Look at the "Young Outsiders" and the "Hard-Pressed Skeptics" in the middle of the above chart.
While the Hard-Pressed Skeptics say they voted 65-25 for Obama in 2012, they are much more split on their ballot preference in this year's midterms, only favoring Democrats 51-37. Then there are the Young Outsiders, who favor Republicans overall but are much more split than the two core GOP groups.
The problem for a party trying to increase its margins among both of these swing groups, is that the groups have very different views. Take, for instance, the safety net:

Hard-Pressed Skeptics strongly agree with Democrats that the poor have hard lives and government aid can help them — while the Young Outsiders overwhelmingly agree with Republicans that the poor have it easy because of benefits, and that government aid does more harm then good. These latter attitudes can hurt GOP politicians trying to appeal to economically-struggling swing voters — as when Mitt Romney was secretly recorded telling an audience of Business Conservatives that 47 percent of the public was dependent on government benefits, and that he'd "never convince them they should take personal responsibility and care for their lives."

A closer look at the group Pew calls the Hard-Pressed Skeptics is interesting. More than any other group in the survey, this group is in financial trouble: 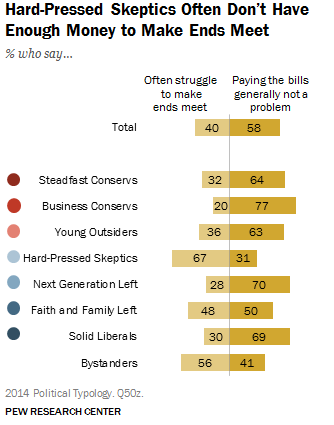 As shown above, Pew found that this group voted for Obama in 2012. But these financially-stressed voters now disapprove of his job performance 44-48, and are skeptical of government overall: 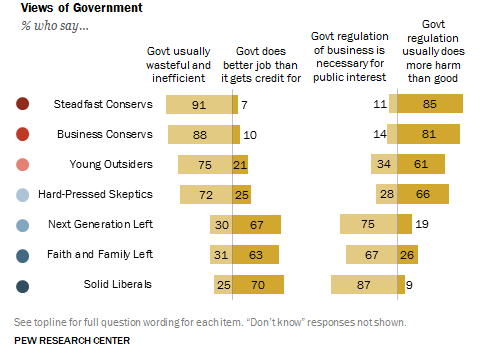 A Republican Party offering an agenda that helps these voters — rather than telling them they're moochers — could therefore be formidable. Indeed, Reihan Salam argues that Marco Rubio started doing just that in a speech this week.

6) Both swing groups are skeptical of activist foreign policies

There's been a lot of speculation on whether the 2016 Republican foreign policy platform will reflect Chris Christie's hawkish views, or Rand Paul's more restrained ones. And the Pew report shows that those two swing groups, the Young Outsiders and Hard-Pressed Skeptics, are very suspicious of activist foreign policies. Indeed, while both business and populist conservatives agree that the best way to achieve peace is through military strength, and that overwhelming military force is the best way to defeat terrorism — but practically every other group examined strongly disagrees.