Obamacare enrollees may have to switch plans next year, or else pay more

Share All sharing options for: Obamacare enrollees may have to switch plans next year, or else pay more

Unless they change their insurance plans next year, many people with insurance subsidies could see their premiums go up more than they expect, according to a new report from Avalere Health.

So far, reported premium growth has been modest by historical standards. Those estimates reflect the full cost of premiums, though; what people with subsidies pay out of pocket could be a different story.

The federal subsidies used to offset the cost of insurance are based on income, but they're also pegged to the second-cheapest silver plan on each state exchange, which is called the "benchmark plan." When people choose something cheaper than the benchmark plan (the cheapest silver plan, or one of the bronze plans), they will spend less money out of their own pocket on the insurance premium. If a person chooses a plan that's more expensive than the benchmark plan, he's responsible for the extra cost.

But annual changes to insurance premiums aren't uniform across plans. That means the "benchmark plan" can change from year to year — with financial consequences for those with subsidies. These consequences will be most acutely felt by low-income enrollees.

Take Sue, an imaginary Maryland resident who enrolled in her state's benchmark plan for 2014. With her subsidy, she was paying $58 a month for health insurance. But in 2015, her plan is going from the second-cheapest silver option to the ninth-cheapest. The subsidy, now pegged to a different plan, won't cover as much of Sue's premium as it used to. Her share of the premium will climb to $94, a 62 percent increase. 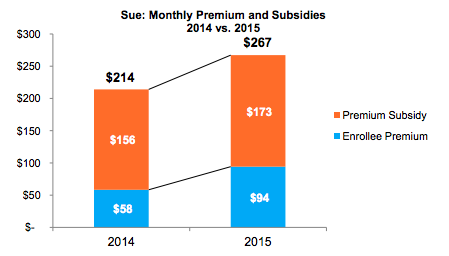 The subsidies are set up this way to foster competition — insurers want to offer the cheapest plans, where subsidies go the farthest. But that competition creates an annual problem for enrollees, who may not be aware that their out-of-pocket expenses could climb, unless they switch plans during the next open enrollment window.

A regulation proposed on Thursday afternoon by the Department of Health and Human Services would require insurers to notify enrollees of their new expected premium payment prior to renewal.