The Supreme Court struck down Thursday a Massachusetts law that barred protesters from entering a 35-foot "buffer zone" around abortion clinics in the state.

The justices ruled unanimously that the buffer-zone law, which barred non-employees of the clinic from entering public sidewalks within 35 feet of an abortion clinic, violated the first Amendment rights of those who wished to offer counseling to patients entering the facility.

"The buffer zones burden substantially more speech than necessary to achieve the Commonwealth's asserted inter­ests," Roberts writes in his majority opinion. "The
Commonwealth has too readily forgone options that could serve its interests just as well, without substantially burdening the kind of speech in which petitioners wish to engage."

Massachusetts had defended the law as necessary to defend public safety and patient access to health care, as protesters regularly gather outside of abortion clinics. The court ruled that, while public safety is a "legitimate" interest of a state government, it does not, in this case, outweigh the "serious burdens" imposed on free speech.

Some observers noted an irony in the ruling: last year, the Supreme Court issued regulations that barred protests in the plaza area outside its courtroom, an area much larger than the buffer-zone in the Massachusetts law. NARAL Pro-Choice Massachusetts, a pro-choice group, put out this graphic comparing the two areas: 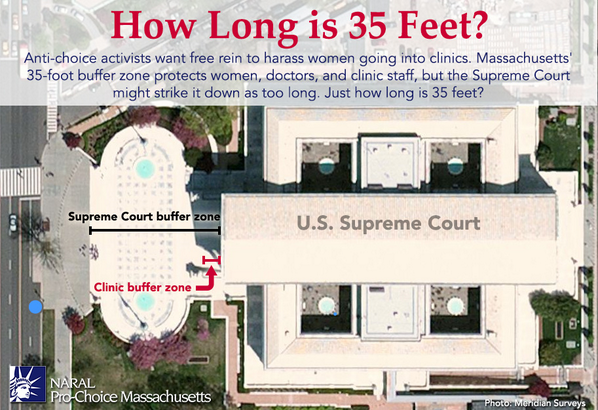 The Supreme Court decision will likely have a ripple effect into other states. Massachusetts was one of three states with a buffer zone law, according to the Guttmacher Institute, the others being Colorado and and Montana. Massachusetts began moving towards its law to restrict access to the space around clinics in 1994, when there was a national wave of violence against abortion providers. It's likely that Colorado and Montana will have to re-evaluate their own restrictions in the wake of the Supreme Court decision.