Share All sharing options for: A black man with a college degree is as likely to be working as a white college dropout

But educational attainment may not yield the same benefits for everyone. A new study suggests that young black men need two more levels of education to achieve the same employment levels as young white men. Black men age 18 to 34 with some college have roughly the same chance of being employed as white non-Hispanic men who didn't graduate from high school, according to a new analysis of Census data. 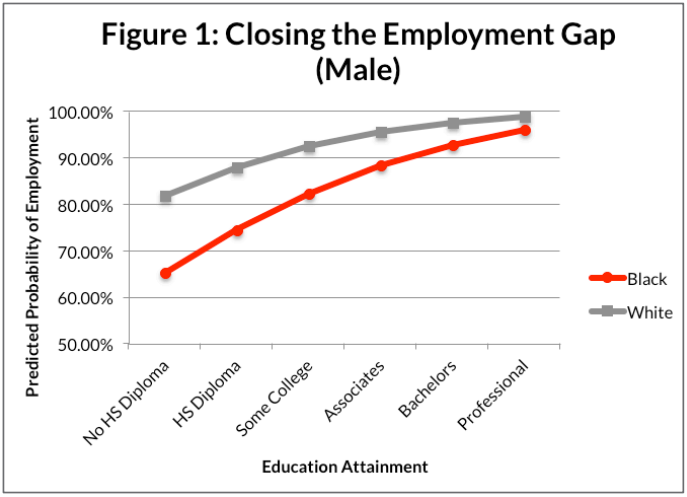 The data, from a report by left-leaning group Young Invincibles, show the projected likelihood of being employed with any given education level after a host of other factors are held constant — marital status, whether people are currently in school or not, and geography, for example.

a professional degree yields a young black man a 46 percent pay bump, compared to 29 percent for a white man

The results are similar for women as well, though the gap tends to be slightly smaller. Tom Allison, policy and research manager at Young Invincibles and an author of the report, says they attempted the same analysis on Asians and Hispanics, but the results were most significant between whites and blacks (all results for blacks and whites are statistically significant).

That the line is steeper for blacks than whites shows that each level of education has a higher payoff for black American men than it does for white men. This is also true in terms of pay — getting a professional degree yields a young black man with a bachelor's a 46 percent pay bump, compared to 29 percent for a white man.

That said, whites still earn more than blacks at every level — the gap just gets smaller and smaller with every education level among men, though among women the relative gains are only bigger for black women at the bachelor's degree level.

The report points to discrimination — both society-wide and within the hiring process — as a factor in this gap. Relatively high incarceration rates among young black men may also play a part.

It's true that this study doesn't account for everything — for example, field of study in college or graduate school. Different races and ethnicities have different patterns of study — African-Americans, for example, tend to be underrepresented in STEM fields. That could help to bring their employment levels down. Likewise, quality of schools attended isn't accounted for. If black students are getting high school diplomas but learning less than their white counterparts, that could contribute to worse outcomes.

But then, it's common to partially explain gaps away by controlling for factors like field of study. My colleague, Matt Yglesias, articulated this in an April article on the gender wage gap: "[T]he statistical controls that reveal that don't make the problem of the wage gap go away. They help us identify where it exists."

Race is correlated with all sorts of poor economic outcomes — African-Americans tend to have far lower rates of social mobility than whites, for example, and have a much higher unemployment rate.  So while a study like this may help to isolate where the problems are, it's also important to remember that racial gaps in the US persist for a wide range of reasons, not all of which can be isolated.