The charts, not the sound, define popular music

Share All sharing options for: The charts, not the sound, define popular music

Bob Stanley is a music journalist and a member of the indie pop group Saint Etienne. His new book Yeah! Yeah! Yeah!: The Story of Modern Pop traces the history of popular music from the introduction of vinyl records through Beyoncé. I spoke with Stanley on the phone this week about pop music, and his new book. This interview has been edited for length and clarity.

Kelsey McKinney: To start off, can you define pop music?

Bob Stanley: It's popular music at its root. That's what pop's short for—'pop' was coined in the '40s. I think that the charts are basically time capsules. They are proper social history. What makes a song a pop song is being at the top of the chart, whatever the genre. The chart is what people are buying. It doesn't matter if the song is the least cool thing you've ever heard. If it sells, it's at the top. That's really why I used the charts to define pop music.

KM: How does a genre like rock-and-roll emerge and become just as popular as more traditionally "pop-y" songs?

BS: The reason that new genres spring up is quite often in opposition to things that already exist. Everything rubs up against each other. The Stones are the classic example. The Beatles already existed, so the Stones created the complete negative of that, because kids are going to want that. Kids are going to want to react to the Beatles. If they suspect that anything is wrong with the Beatles, they're going to love something that's the opposite. Rock is the first thing that really says "We don't want to be pop," and defined themselves that way.

KM: What are the building blocks of creating a pop star?

BS: A lot of it is giving people what they want.  Even going back to the original blues singers, who were held in such high esteem by people, they were encouraged to record their bleakest sounding songs by their record companies, because that's what their audience would have wanted. The country musicians had the same thing. They were encouraged to sing the things that were the most country. Going all the way back to the '20s. Most pop is a construct. It's very rare that you find someone who just comes out with an identity and an image that is completely their own. Elvis did originally, but it's almost always a construction.

KM: What do you make of today's chart toppers? 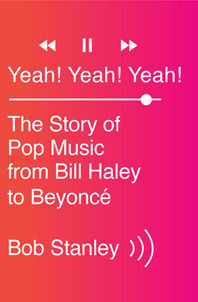 BS: To me, those on the chart right now sound really fragmented, probably because I'm used to discovering music in a particular way, and that way is pretty much over: seeing records and seeing these colorful labels, and collecting records and trying to work out someone's career and what they mean by the people they've mentioned in interviews. Even with the interviews with people today, they don't give very much away. You don't have to go back very far to find people who were controversial not just for the sake of it. They would tell you what should you be listening to next. The omnipresence of music today doesn't really help. Several layers of mystique are gone, I think.

Just clicking the radio on, I'm not going to hear an important new release. It might be somewhere else. I still find the pop process fascinating, but I'm not really drawn to the music. This era does feel like it's something completely different.

KM: Let's play a game. I'll list a pop song that you discussed in your book, and you tell me your off-the-cuff reaction.

"Rock Around the Clock" by Bill Haley & His Comets

BS: This is an interesting one. When I was growing up, if you ever saw anything about the history of pop or the history of rock, that would always be the first song they played. Absolutely always. And then sometime in the '80s, they stopped playing it. They thought it was too corny, or not important. They started saying that "Rocket 88" was the first rock and roll song. People were just being snobs basically.

"Rock Around the Clock" was an incredibly important record. The film based on it, which was a harmless film, was banned in most of Britain. That's the impact it had. This was before Elvis. As much as I love Elvis, I think Bill Hadey really gets a raw deal. A lot of it is the way he looked and the fact that his career didn't sustain. But whether you liked it or not, that was the record that started the whole thing. It all came out of there.

"How Deep is Your Love" by the Bee Gees

BS: I think the Bee Gees are stupendously underrated. No matter what the genre or the era was, they'd come back. No matter what. They managed to come back and write another #1. They seemed to be natural song writers. Their lyrics are almost always really isolationist. How Deep Is Your Love is all about doubt: doubting the whole world and doubting your relationships. It's not a happy song. That's what their lives were like. They seemed like really quite isolationist people. They've never been fashionable, and that's a shame.

"Good Vibrations" by The Beach Boys

BS: That was a number one all around the world, because it's an extraordinarily complext song. That's incredible, because it's not a sweet song at all. It was a huge influence on me as a kid. It was the most unusual, futuristic sounding thing. There's definitely an edge, which is definitely drug-based. Every time you think you know where its gonna go next, it goes in a completely different direction. It unintentionally brings the world into the album era. There was only so much you could do inside of three and a half minutes, and that kind of gave people the idea that they could stretch it over the course of a whole album. It was the peak of something and the end of something at the same time.

"You're So Vain"  by Carly Simon

BS: "You're So Vain" is just fantastically bitchy. I just like the way that somebody could write that song. Maybe even before it came out, people knew that this song had been written about Warren Beatty. It became sort of a cause celébre for that reason, which seems like a thing that has happened a lot more ever since. People were up in arms about it before they had even heard it. It's kind of the beginning of that I suppose. I can't think of another record before "You're So Vain" that did that.

"I Want You Back" by The Jackson 5

BS: Almost every second of that song has a hook or something that's pulling you in. That's a sure fire way to write a great album. The fact that there was a ten year old singing it; it was insane. There's never been any other child star that could sing as naturally as that. It's genuinely unnatural. And to be singing a love song is ridiculous. "ABC" makes a lot more sense, but not "I Want You Back." There is not a wasted second on that album.

BS: I was working in a record shop in the middle of nowhere. There's nothing cultural happening there at all. That's what I'm saying about the charts. People would buy whatever was in the top slot, no matter what it was. It's self-fulfilling prophecy: having a hit about buying material things that everyone buys. I never thought at that point that I'd ever be a Madonna fan. But that turned around pretty quickly because "Into The Groove" would come out a few months later.

BS:  This album felt like it was out of nowhere. Nirvana was in the top 10. The last time I looked, they were a supporting act. It really caught me by surprise and it took me a while to work out what it was. But it was really Kurt Cobain. He was doing stuff in America that we took for granted over here. Wearing dresses, or whatever. It's wish fulfillment. He must have known it would be a huge hit, as the lyric is basically about being entertained. It's pretty astonishing.

"Crazy In Love" by Beyonce

BS: The whole thing is chorus. It's really relentless, which I love. It's a really hard thing to do, because you don't want it to stop. It just keeps going. It feels like that's maybe the beginning of the end of the golden era of R&B. It's got quite a conventional on-the-beat bass line, and it's a phenomenal pop record. If that's where her career was going to go, then I've got no problem with that. It's definitely a line in the sand between R&B then and now.

Yeah! Yeah! Yeah!: The Story of Modern Pop was released in the United States on July 7.