1) What's the history of recess appointments?

Article II of the Constitution states the following:

The President shall have Power to fill up all Vacancies that may happen during the Recess of the Senate, by granting Commissions which shall expire at the End of their next Session.

On first reading, it seems simple — when the Senate declares a recess, a president can appoint nominees to positions that would normally require Senate approval. And that's how the power has been understood, and frequently used, by presidents of both parties for decades. Check out this Congressional Research Service report for an extensive list: 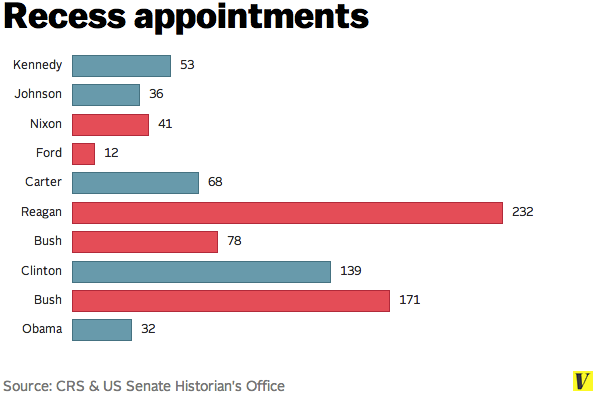 Some recess appointments are used simply because the Senate's out of town — but others have been used to appoint nominees who have been blocked by the Senate, or are highly likely to be blocked by them. This latter type of recess appointments has frequently been a source of partisan controversy. But until very recently, few have disputed that the Constitution gives the president the power to make them.

2) Why were Obama's recess appointments controversial?

"Gimmicks do not override the President's constitutional authority"

During the Bush Administration, Democrats blocked many of Bush's preferred nominees, and he responded by appointing them during recesses. The annoyed Democrats then invented a new tactic — even when nearly all senators had left town, they would refuse to let the Senate recess at all. Instead, they'd hold "pro forma" sessions to keep the chamber technically active, so Bush couldn't use his recess appointment power. Turnabout was fair play — once President Obama had been elected and the Republicans took the House, the GOP effectively prevented the Senate from ever recessing, by requiring constant pro forma sessions (the House must consent for the Senate to go into a lengthy recess). This prevented Obama from appointing some nominees the GOP had blocked — including three appointees to the National Labor Relations Board, and the director of the Consumer Financial Protection Bureau.

Finally, in January 2012, an increasingly frustrated Obama took action. He declared that, regardless of the pro forma sessions, he considered the Senate to actually be in recess — and therefore that could appoint those four nominees unilaterally. "Gimmicks do not override the President's constitutional authority to make appointments to keep the government running," White House Communications Director Dan Pfeiffer wrote. But conservatives called these actions blatantly unconstitutional, and even some liberals agreed. Soon enough, a lawsuit was filed calling an NLRB decision illegitimate because it was handed down by those nominees.

3) Why did the case become much broader?

A DC Circuit panel heard the suit about Obama's NLRB nominees — but, as Charlie Savage of the New York Times wrote, it "blew past that issue and called into question nearly two centuries of recess appointments by presidents of both parties." So the Supreme Court decided to tackle two broader questions:

So a narrow case where many observers agreed Obama had stretched his powers too far in one instance, became a much broader case with the potential to newly and dramatically limit presidential recess appointment power overall.

4) What did the Court decide?

In the end, the Supreme Court was unanimous that Obama's contested appointments were unconstitutional. "We hold that, for purposes of the Recess Appointments Clause, the Senate is in session when it says it is," wrote Justice Stephen Breyer. But five justices — the four liberals, and Justice Anthony Kennedy — decided to reject those broader challenges to the president's recess appointment power, and affirm recent historical practice as constitutional. "The Constitution empowers the President to fill any existing vacancy during any recess," Breyer wrote, "of sufficient length."

Yet four conservative justices — John Roberts, Antonin Scalia, Clarence Thomas, and Sam Alito — wrote that they would have gone much further, and sided with both of the above critiques. Scalia's writes that it's "clear from the Constitution's text and structure" that recess appointments were only meant to be used to fill vacancies that just open up between two formal sessions of Congress. In his view, the hundreds of recent recess appointments filling preexisting vacancies in the middle of a Congressional session were all unconstitutional. "The majority casts aside the plain, original meaning of the constitutional text in deference to late-arising historical practices that are ambiguous at best," he wrote. Breyer responded that "Justice Scalia would render illegitimate thousands of recess appointments reaching all the way back to the founding era," and that he himself was "hesitant to disturb" centuries of history.

5) What are the practical consequences of the ruling?

There won't be too many near-term consequences from this decision. The controversial NLRB nominees have all since left the board, and though the decisions they issued there may now be invalid, their replacements have since been confirmed by the Senate. And Richard Cordray of the CFPB was confirmed by the Senate last year, so he's in the clear.

Overall, the president's recess power remains mostly intact — but it's less important than ever. With the recent filibuster rules change, Obama can get more of his nominees through the chamber without Republican support. Historically, the recess appointment power has been important during periods of divided government. But the GOP is still requiring pro forma sessions to block official recesses (unless the president promises not to appoint any nominees). So while recess appointments may still be possible, they're looking increasingly like a thing of the past.