Will the Supreme Court ever figure out technology?

Share All sharing options for: Will the Supreme Court ever figure out technology?

The Supreme Court issued two major rulings yesterday: in Riley v. California, the court required cops to get a warrant before searching cellphones, and in American Broadcasting Cos. v. Aereo, the court banned the cloud-TV service Aereo from retransmitting broadcast television signals over the internet.

At a glance, these cases are from different worlds: one's about the Fourth Amendment, the other about TV networks and the wonkiest of wonky copyright law. All the justices agreed with the Riley decision, but the court split 6-3 along ideological lines in the Aereo case, with Justices Samuel Alito and Clarence Thomas joining in a fierce dissent written by Antonin Scalia. Riley will probably go down in history as a landmark civil rights decision; the Aereo case is already being called a loss for consumers aching to break free of the backwards and restrictive TV industry.

But both of these cases are also fundamentally about technology — specifically, what happens when technology moves so fast that the law simply doesn't understand it anymore. When that happens, it's up to the courts to provide answers to difficult questions: is searching a smartphone like searching a pack of cigarettes? Can thousands of tiny antennas and some clever code dance around copyright law well enough to create a new business model? To answer these questions is to answer the hardest question of all: can you put the technology back in the box, or do we need to change society around it for good?

Can you put the technology back in the box, or do we need to change society?

Look at Riley and the Aereo case through that lens, and it's easy to see how the justices arrived at their decisions: they all have and use cell phones, so they understand the contours and benefits of the technology intimately, but TV is still just TV to them. It's fair to say our Supreme Court cares a hell of a lot more about protecting the data on their smartphones than lowering their cable bills.

Roberts spends a fair portion of the Riley opinion doing nothing more than listing the various types of apps to demonstrate how much information a phone can contain: pregnancy apps, apps to manage your gambling addiction, apps to plan your budget and improve your romantic life; they all get a callout. "The phrase 'there's an app for that' is now part of the popular lexicon," he says, before noting that the average smart phone user installs 33 apps. There's also a very specific discussion of searching for the symptoms of a certain disease and then spending time on WebMD. Roberts is 59; his children are both young teenagers. It's pretty safe bet that he's had the same Google-induced medical freakouts the rest of us have had.

Once you understand the immense power of a smartphone this well, it's hard to say our traditional search-and-seizure doctrine makes any sense when applied to mobile devices. We've had 220 years of Fourth and Fifth Amendment jurisprudence that are rooted entirely in physical interactions between cops and suspects: arrests, hidden weapons, destroyed evidence. But a cop searching a cell phone after a suspect is in jail is nothing like a patdown for a knife, says Roberts. "Once an officer has secured a phone and eliminated any potential physical threats, however, data on the phone can harm no one."

The idea of ubiquitous cloud storage was once science fiction, but Roberts understands it well

Roberts goes on to discuss the not-trivial issue of cloud storage: phones have access to lots of data you store on servers far away, so the police wouldn't even be searching information suspects carry with them. This is all completely esoteric — the idea of ubiquitous cloud storage was science fiction 20 years ago, but Roberts clearly understand it well and cuts the government's offer to develop new search procedures to the ground. "Probably a good idea, but the Founders did not fight a revolution to gain the right to government agency protocols," he says. "Our answer to the question of what police must to before searching a cell phone seized incident to an arrest is accordingly simple — get a warrant."

The justices of the Supreme Court all have phones; it's a safe bet that most of them have smart phones. They don't want to put the technology back in the box; they like it too much. That's how you get a technology decision that's as clear and expert as Roberts' in Riley; he probably checks his iPhone first thing in the morning just like the rest of us.

But it's a different story when the justices don't understand the technology — when it's not literally in their pocket making their lives better every single day. Then we're saddled with Justice Breyer's strident, almost angry opinion in Aereo, which literally refuses to consider the actual technology involved or how it might be different from what's come before. Aereo built an elaborate system of miniature personalized antennas and individual storage in an effort to skirt the existing copyright law, but the court simply wasn't having it. "Viewed in terms of Congress' regulatory objectives, why should any of these technological differences matter?" asks Breyer. "They concern the behind-the-scenes way in which Aereo delivers television programming to its viewers screens. They do not render Aereo's commercial objective any different from that of cable companies."

Well, yes. But that's like drawing the following diagram of Aereo and Comcast and then arguing that the companies are the same: 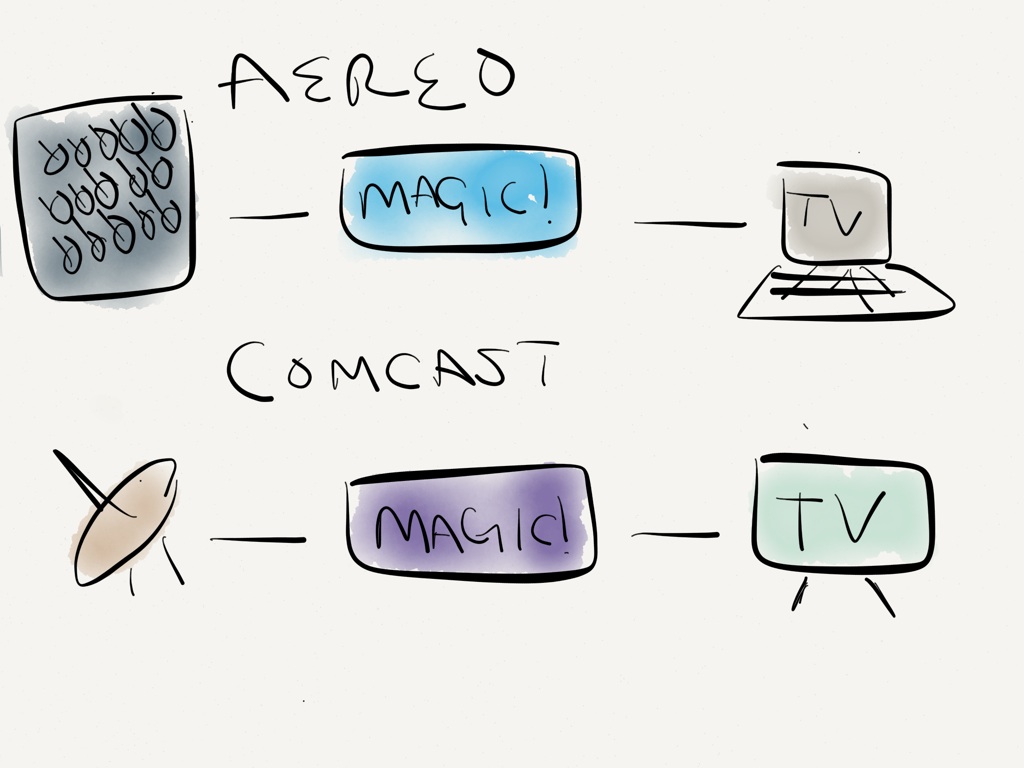 Aereo's technology is the whole point; it was designed and engineered specifically to create a new business model within our existing legal framework. But because this technology isn't actively working to make the lives of our Supreme Court justices better, they simply decided it was the same as old technology and decided to shut it down. In the Riley decision the court demonstrated a clear and working understanding of apps and cloud storage, but in the Aereo case the idea of a web-based personal DVR is crushed into tortured analogy with an ancient TV whose signals "lurked behind the screen, ready to emerge when the subscriber turned the knob." Justice Breyer thinks clicking links to watch video on the internet is like turning the knob on a 1970s TV; most of Aereo's customers probably don't own an actual TV and have never even seen one that has knobs.

But the heart of the Aereo decision is even stranger. "And why, if Aereo is right, could not modern CATV systems simply continue the same commercial and consumer-oriented activities, free of copyright restrictions, provided they substitute such new technologies for old?" asks Breyer. "Congress would as much have intended to protect a copyright holder from the unlicensed activities of Aereo as from those of cable companies."

That's fundamentally a guess as to what Congress would have done in 1976 had it known about the internet, Aereo, and the state of the television market. It might be a good guess, and it might be a bad one, but it's still a guess, and it casts the entire nature of innovation in a negative light. Of course the existing cable companies will use new technology if it's cheaper, just like any company would. The problem here seems to be that Breyer and the majority don't see any benefits to themselves, so they're inclined to protect the status quo. The technology goes back in the box.

It's no wonder Scalia, the court's most strident textualist, wrote a scathing dissent even while agreeing that Aereo's service should not be allowed. "It is not the role of this Court to identify and plug loopholes. It is the role of good lawyers to identify and exploit them, and the role of Congress to eliminate them if it wishes," he writes. "Congress can do that, I may add, in a much more targeted, better informed, and less disruptive fashion than the crude 'looks-like-cable-TV' solution the Court invents today."

"It is not the role of this Court to identify and plug loopholes."

But it's not just lawyers looking for loopholes, it's the entire tech industry. Loopholes are the building blocks of our current age of disruptive technology; we've all got the smartphones now, and the world is changing around them. An entire class of startups are building massive businesses around loopholes in the law, and where those loopholes don't exist they're just blazing forward anyway. Uber is valued at $17 billion and just launched illegally in Miami because it couldn't ignore demand anymore; Airbnb has been battling New York City hotel and sublet regulations since it first appeared. Bitcoin exists in uneasy tension with a global finance industry that would love to regulate it away.

The Supreme Court took a huge step yesterday when it agreed 9-0 that the smartphone revolution requires a change in how we interpret the Fourth Amendment. But the hard part for our legal system will be the thousands of little steps we need to ensure all those smartphone apps can keep changing the world.