The deadliest Ebola outbreak in history is happening right now

Share All sharing options for: The deadliest Ebola outbreak in history is happening right now

The deadliest Ebola outbreak in recorded history is happening right now. The outbreak is unprecedented both in the number of cases and in its geographic scope. And so far, it doesn't look like it's slowing down.

The outbreak has now hit three countries: Guinea, Sierra Leone, and Liberia. And the virus — which starts off with flu-like symptoms and often ends with horrific hemorrhaging — has infected about 600 people and killed an estimated 367 since this winter, according to the numbers on June 26 from the World Health Organization.

Ebola is both rare and very deadly. Since the first outbreak in 1976, Ebola viruses have infected roughly 2,400 people and killed about one-third of them. Symptoms can come on very quickly and kill fast: 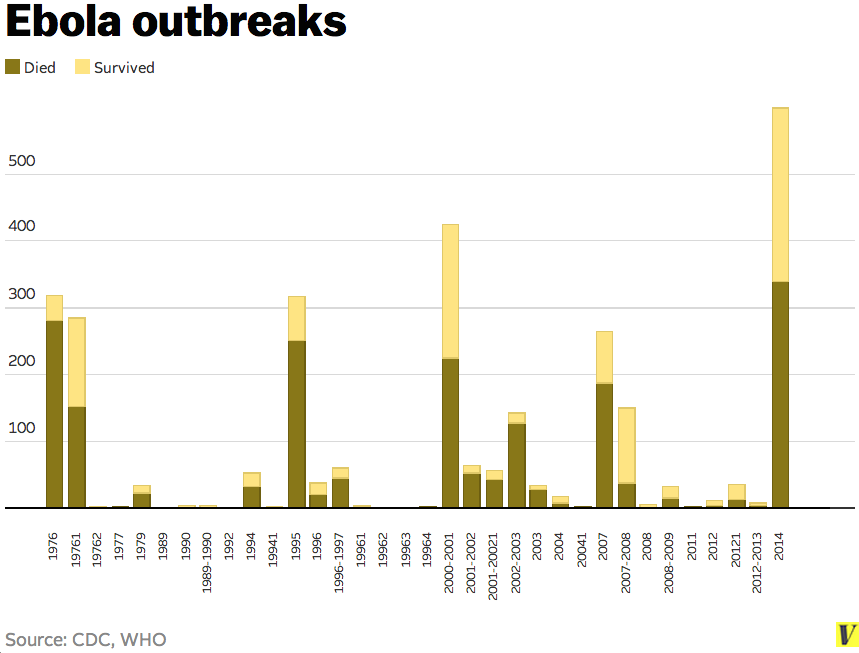 Each bar here represents a different Ebola outbreak. This data is what the CDC has on record. Not every case or death always gets officially recorded, so there is always some wiggle room in numbers like these. 2014 is estimate of the current outbreak as of June 24, 2014 from the WHO.

Every now and again, the disease spills over from animals to humAns

The viruses are constantly circulating in animals, most likely bats. Every once in a while, the disease spills over into humans, often when someone handles or eats undercooked or raw meat from a diseased ape, monkey, or bat. An outbreak can then happen for several months. And then it becomes quiet, again.

This outbreak started in Guinea sometime in late 2013 or early 2014. (The majority of cases have been in that country.) It has since spread to Sierra Leone and Liberia, including some major capital cities. It's the first time Ebola has ever reached a state capital.

First, this outbreak concerns the most deadly of the five Ebola viruses — Zaire ebolavirus, which has killed 79 percent of the people it has infected. (The virus is called that after the formerly named Zaire, which, along with Sudan, experienced the first Ebola outbreak back in 1976.)

Meanwhile, as an editorial in the medical journal Lancet noted, social stigmas and a lack of awareness may be preventing people from seeking medical care (or even actively avoiding it). Another often-cited problem is that some people have had direct contact with victims' dead bodies during funerals and preparations for burial, which can spread the disease.

The ebola viruses known today don't spread from person-to-person well enough to have much risk of causing a wide pandemic across several continents. The risk of Ebola coming to the US is very low.

Update: Incorporated the newest case counts from the WHO on June 26.