Share All sharing options for: The Obama administration chose the worst months of the year to sell health insurance

The holiday season may be the very worst time to encourage people to enroll in health insurance — and that's exactly what Obamacare does.

The health law sets up "open enrollment periods" for the insurance exchanges, a few months each year when people can enroll in coverage. Insurers can't keep enrollment open year-round, because people would wait until they got sick or injured to enroll, which would drive up the cost of insurance.

Obamacare's first open enrollment period lasted from October 1, 2013 through the end of March 2014; this gave people plenty of time to learn about new insurance options and enroll in coverage, despite the technical issues that plagued Healthcare.gov's rollout.

Open enrollment for 2015 will last from November through February. The Obama administration probably picked late fall for open enrollment because that is when Medicare and most employers permit insurance enrollment changes. But between Thanksgiving and Christmas, late fall is also incredibly stressful, both financially and emotionally.

late fall is stressful, both financially and emotionally.

According to a new study in Health Affairs, people's capacity for decision-making is stretched especially thin during the lead up to the holiday season. And when people are stressed, behavioral economists have found that decision-making is done with a sort of tunnel vision: people focus only on their most pressing short-term problems, sidelining long-term issues.

"The holiday season between Thanksgiving and New Year's — with pressures for buying presents, travel, and the onset of winter home-heating bills — strains many family budgets," the authors write. "Research on people's reactions to scarcity of time and money suggests that the holiday season may be the worst time of the year to require complex health insurance enrollment decisions."

The authors suggest that fewer people will buy health insurance if open enrollment is restricted to the holiday season — and the people who do enroll might be sicker, on average. "The implications are especially worrisome with respect to younger low-income people who have not had health insurance and might lack experience choosing among plans. If they cannot make a choice among the health plan options and remain un- insured, the goals of the ACA may be in jeopardy."

Should open enrollment be in the spring instead?

The study authors have a different idea: move open enrollment to  tax filing season. Tax returns (and the Earned Income Tax Credit) leave people feeling more financially secure; prior research has shown that this leads to more spending on durable goods and services like furniture, appliances, and cars.

During this time, people are more willing and able to cope with complex financial decisions — like choosing an insurance plan. Additionally, the tax filing season is when people will have the best sense of their income for the upcoming year, which is important for calculating subsidies.

the authors recommend having open enrollment start in february, end in april. 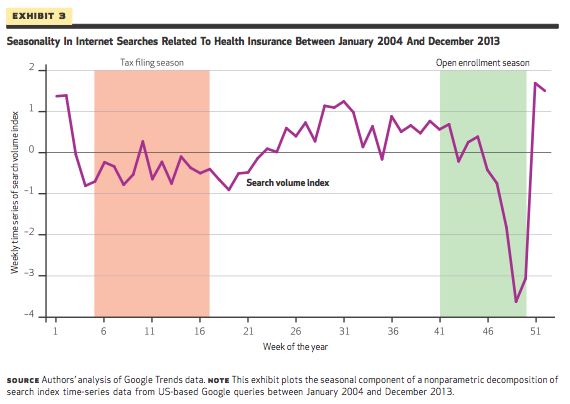