5 reasons why the shrinking GDP isn't a reason to panic

Share All sharing options for: 5 reasons why the shrinking GDP isn't a reason to panic

The US GDP fell at an annual rate of 2.9 percent in the first quarter, its slowest rate of growth since 2009, in the middle of the recession. And yet no one seems to mind. Stock markets didn't plummet, and no one is forecasting yet another recession. A shrinking GDP is never great news, of course, but here are a few reasons why economists and markets are shaking off the biggest economic contraction in more than five years.

Broadly speaking, the job market isn't growing as fast as we'd like it, but it didn't seem to pull back in the first quarter. 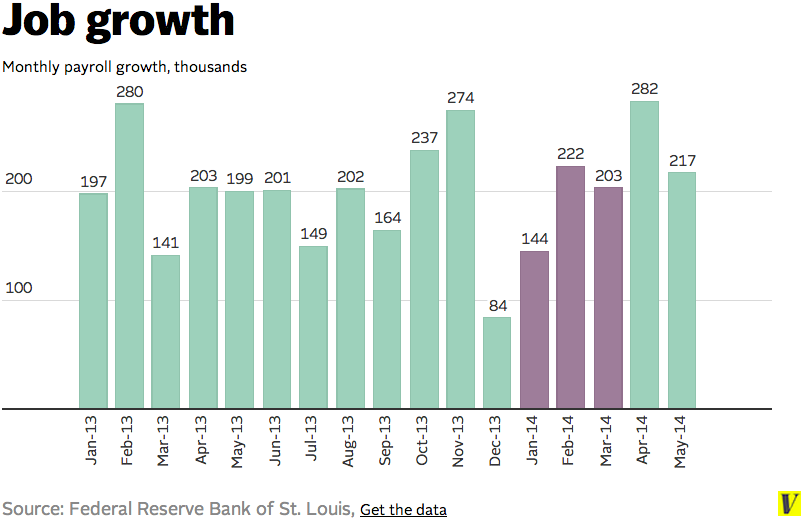 And though healthcare helped pull GDP downward in the first quarter, even employment in that industry didn't appear to take a hit. 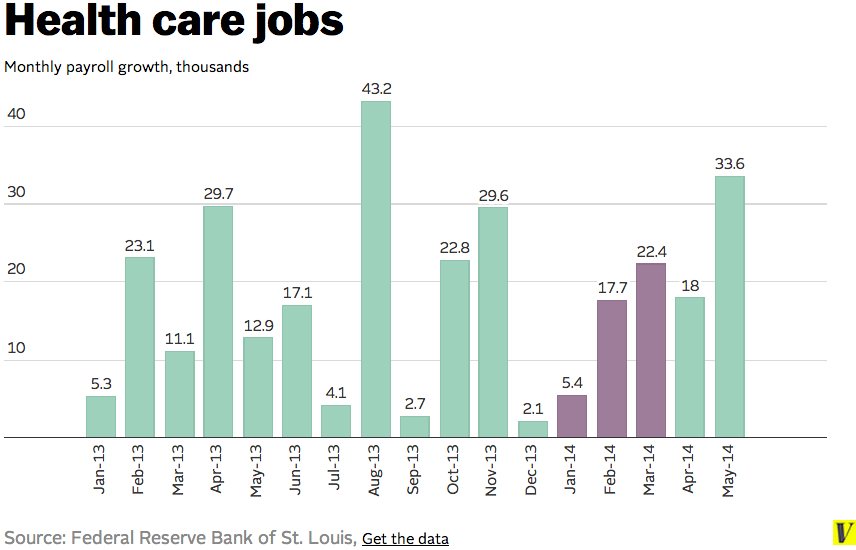 Weather accounted for somewhere between 50 and 100 percent of the GDP pullback, says PNC senior economist Gus Faucher. When polar vortexes and multiple feet of snow keep people stuck at home, they just can't get out to buy groceries or see the doctor. That's only a temporary hit to the economy — everyone has to go to the doctor and buy food again at some point.

The chart above shows that healthcare jobs didn't take a beating in the first quarter, despite the fact that healthcare growth pulled back far more than anyone had expected. If healthcare spending is falling, that could be a very good sign, as Vox's Adrianna McIntyre writes, as it suggests healthcare is getting more efficient. According to one economist, healthcare could continue to be a drag on GDP, but it won't be a reason to worry.

"Looking forward, the volatility in the measurement of healthcare services represents a risk to our GDP forecasts," says Doug Handler, chief US economist at IHS Global Insight, but he adds: "Since this volatility is not business cycle related, its impact should be heavily discounted in assessing the general health of the economy."

And it's also important to put this into context: health care spending fell, but it only contributed a negative 0.2 percentage points to the 2.9 percent fall in GDP.

Inventories — stocks of goods businesses have on hand to sell to customers in the future — count in GDP because they are counted as investment. They also are one of the most volatile components of GDP, and they were down in the first quarter, pulling back GDP growth by 1.7 percentage points. In part that's just because businesses stocked up in the third quarter of last year. It doesn't mean firms will keep spending less on inventories, either; rather, they are expected to again boost their inventories in the second quarter.

None of this means that there's absolutely nothing wrong with the economy — as the New York Times' Neil Irwin writes, in better times, the economy can shake off a quarter of bad weather much more easily. Still, this downturn looks temporary. Some economists foresee an annual rate of growth of 3.5 or even 4 percent in the second quarter.