Share All sharing options for: The great timing of Hillary Clinton’s dumb comments

Hillary Clinton is rusty. Her book tour is proof. She got in a fight with NPR's Terry Gross over gay marriage. She said, ridiculously, that she and her husband were "dead broke" upon leaving the White House (you have to be pretty damn rich to be that broke). She told the Guardian that "we pay ordinary income tax, unlike a lot of people who are truly well off"  —  an odd statement for someone who is, by any measure, absurdly well off.

The gaffes have occasioned a rapid reassessment of whether Clinton is really the fearsome campaigner so many assumed. "She's an overrated politician," writes the Washington Examiner's Philip Klein. "Some Democrats fear Clinton's wealth and ‘imperial image' could be damaging in 2016," reports the Washington Post.

Clinton's chances in 2016 are generally overhyped. For now, her competition is unknown and she's benefitting from a mix of sky-high name recognition, '90s nostalgia, and distance from partisan politics. The campaign will elevate her competitors while re-politicizing Clinton. In fact, it's happening already, as this HuffPo chart of Hillary Clinton's poll numbers suggests (the black line is favorable, the red line is unfavorable): 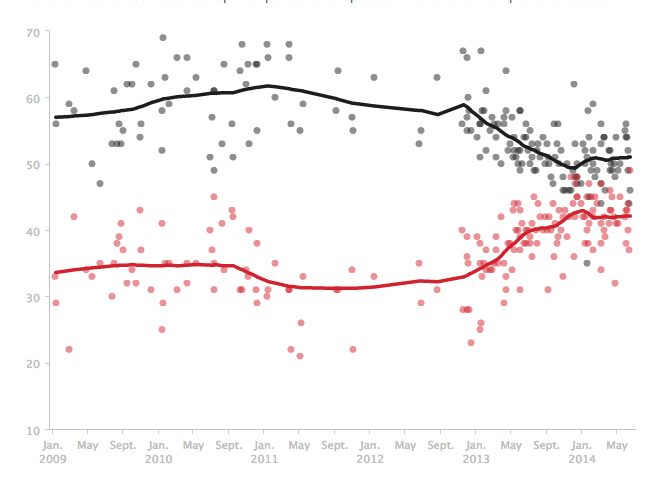 But Clinton's string of highly public, vaguely embarrassing interviews speak to one of her real advantages: she can spend the next two years relearning how to run a national campaign. Her competitors can't.

In a smart piece for Buzzfeed, Katherine Miller observed that Clinton's grueling book tour wasn't necessary. She's Hillary Clinton, after all. She doesn't need to do so many events in so many different states to sell books. "It's insane, like the media version of an Iron Man race for one of the most recognizable people alive."

But perhaps it's not really a book tour at all. What Clinton has really done, Miller says, is "artificially create the conditions of a presidential run." She's figuring out the new media landscape, testing her connection with young voters, and learning whether her messages work. She's seeing how she'll be attacked and discovering which of her rebuttals rally support. She's finding out that if you end up fighting Terry Gross you have probably made some bad decisions in your life.

In politics, like in everything else, there's the myth of the natural

In politics, like in everything else, there's the myth of the natural: the person so blessed with innate talent that they can dominate a field with a dry brow. But scratch a natural and you tend to find thousands and thousands of hours of work.

Bill Clinton is considered a natural — Joe Klein even wrote a book about him entitled "The Natural" — and his wife often suffers in the comparison. "To understand how a clever politician can handle such an issue, consider how a very able politician  — who happens to be Hillary Clinton's husband  —  handled the matter of his newfound wealth," Philip Klein wrote. (I know there are a lot of Kleins in this article. No, none of us are related.)

But think back to the 2008 campaign, when Bill Clinton came off the bench to try and get his wife elected after years on the lecture circuit. He was a disaster.

"When Hillary Clinton's Presidential campaign was launched, in January, 2007, her supporters feared that Bill would overshadow her, as he had when they both spoke at the funeral of Coretta Scott King, a year earlier," reported Ryan Lizza in the New Yorker. "Now the constant fear is that he will embarrass her. "

Clinton seemed flummoxed by the changing politics of the Democratic Party. He seemed astonished to find liberals slamming him and his wife for supporting the Iraq War. "This whole thing is the biggest fairy tale I've ever seen," he said in one ill-advised comment. The man who was once called America's first black president enraged African-American voters by comparing Barack Obama to Jesse Jackson. "It's pretty widespread now that African-Americans have lost a whole lot of respect for Bill Clinton," Rep. James Clyburn told Lizza.

No one is a natural at all facets of campaigning. It takes practice, and it punishes the inevitable failures.

By the end of the campaign, the Obama administration held Hillary Clinton's campaign skills in higher esteem than her husband's. "The Obama campaign is preparing to embrace Hillary Clinton enthusiastically," the New York Daily News reported, "but they're reaching for the 10-foot pole to keep her rabid husband at bay."

But Bill Clinton eventually got his swing back. Four years later, after he reconnected with liberals and spent some more time on the trail, he reemerged as the Obama campaign's biggest asset in the 2012 race.

Anyone who's run a presidential race describes it as a withering experience; the scrutiny is beyond human imagining. A perfect day, or a perfect week, can turn into a disaster with one garbled comment in response to one shouted question at a town fair. Candidates go for months on little sleep, starved for time with their families, nursing sore throats and private disappointments. Brilliant orators learn that they're unsteady debaters. Ace debaters find that they can't raise money. Powerful fundraisers prove to be crummy retail politicians. No one is a natural at all facets of campaigning. It takes practice, and it punishes the inevitable failures.

Hillary Clinton has two advantages over her opponents. The first is that she's done this before. But the second is she can start doing it again much earlier than they can. She's making mistakes in 2014 — when they don't matter. They'll make those mistakes in 2016 — when they do. Clinton's got weaknesses, of course. But the missteps she's making — and learning from — as she finds her footing in the mini-campaign that only she can hold speak to one of her strengths. Come 2016, she's going to look a lot more natural than her challengers.