Share All sharing options for: 9 things people get wrong about student debt

On Tuesday, the small community of writers who like to argue over student debt went to war.

The opening salvo was a Brookings Institution report that argued student debt is no more of a burden now than in the past, and that anecdotes of graduates loaded down with six-figure debt are far from typical.

The researchers found borrowers spend about 4 percent of their income on loan payments, down from 4.2 percent in 1998.  And just 7 percent of households with debt owe more than $50,000.

This all sounded like it added up to an argument that student loan debt isn't something to worry about. Marketplace, the widely distributed American Public Media radio show about business, opened its report on the study like this: "The student loan crisis we've heard so much about may not be as bad as we think."

But there's a problem with the broader debate: "student debt" isn't one unifying experience. The debt held by a University of Michigan grad is nothing like the debt held by a Georgia Tech dropout. Tens of thousands of dollars of debt for an Ivy League-educated doctor leads to a very different life a decade later than the same amount of debt for a vocational certificate.

Simplifying the question to "student debt: crisis or not?" bulldozes these distinctions. 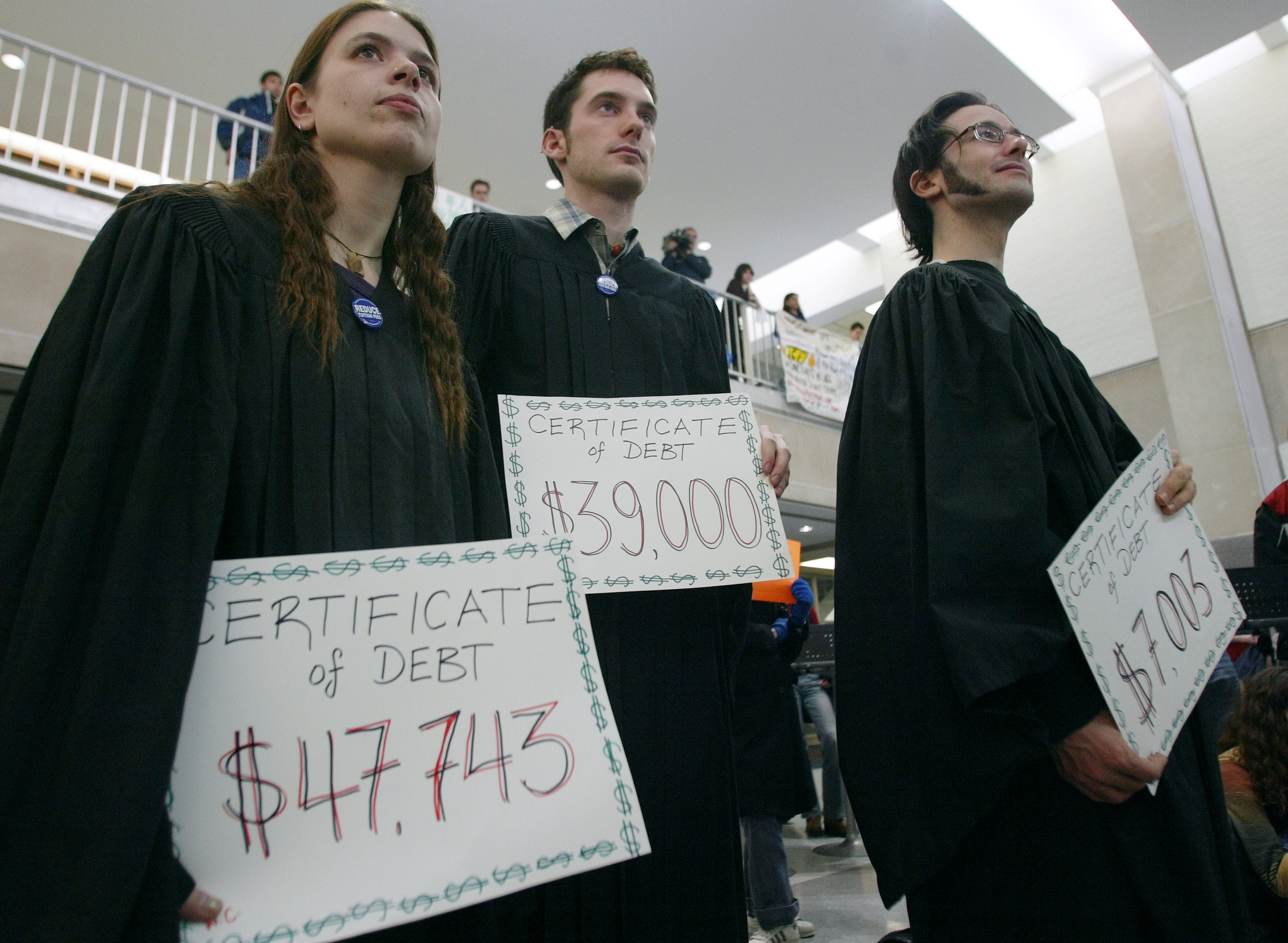 All student loan debtors are not the same. Bernard Weil/Toronto Star via Getty Images

Student loan debtors are a diverse group of nearly 40 million people. They include highly paid doctors, newly minted BAs from Ivy League colleges, and WyoTech graduates with vocational certificates. Averages mash up borrowers who took out their loans in the '90s and deferred payments for a few years with new graduates who are just starting to pay their bills. And statistics on student loan debt include a substantial proportion of dropouts who never earned a degree at all.

Bottom line: a generic recent college graduate and a generic student loan borrower are two very different people. To give just one example, the average monthly payment on a student loan for the class of 2012 is $312. For student debtors overall, the average is about 25 percent lower — $242. 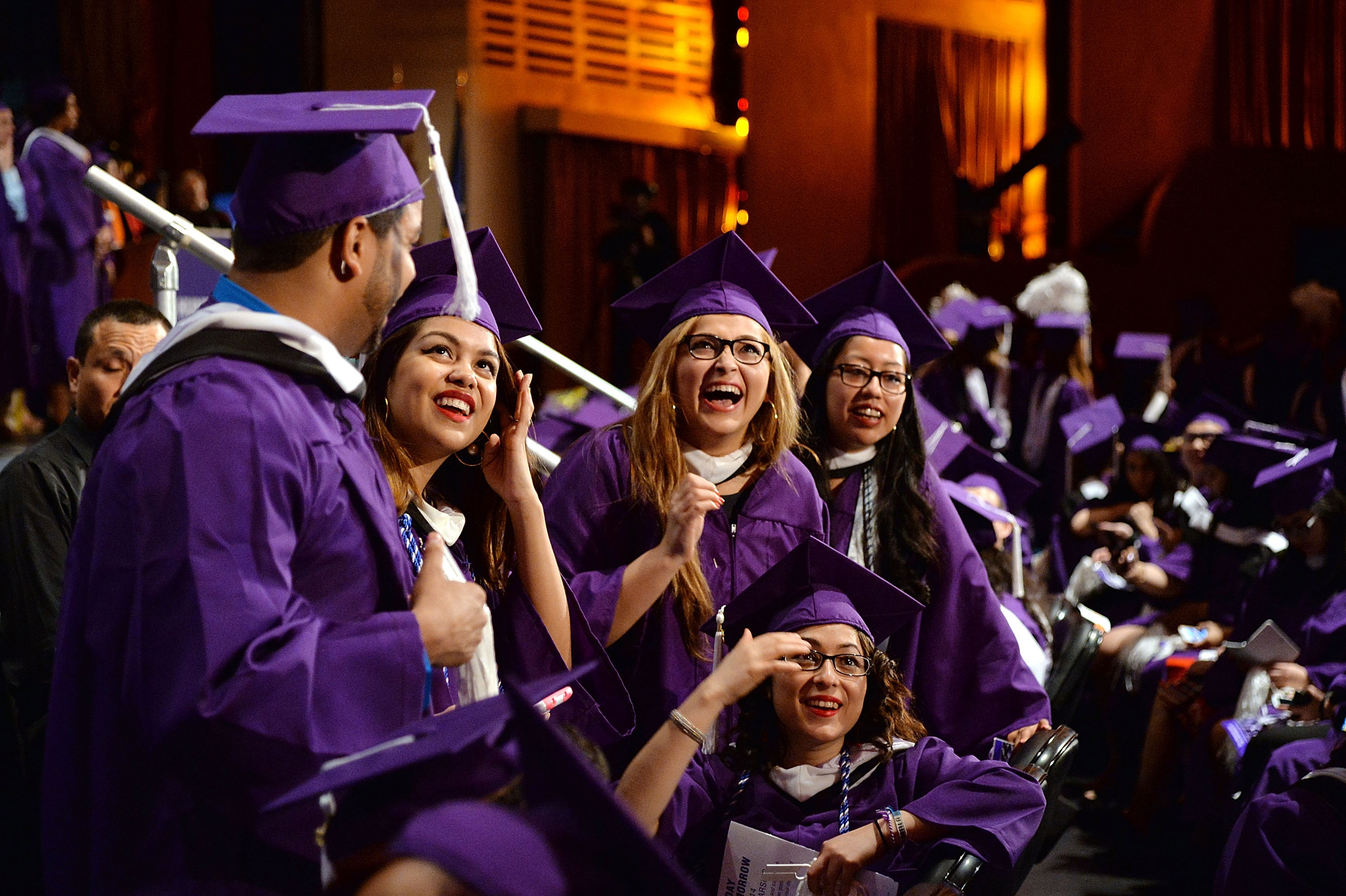 Congratulations, class of 2014. Nobody has ever taken on more undergraduate debt than you. Andrew H. Walker/Getty Images

This is why you hear so much about student debt right now: it's not that "people with student debts" are doing so badly as a class. It's that the debt burden on new graduates kept rising as the economy tanked. The class of 2014 is the most indebted in American history — until the moment the class of 2015 puts on its caps and gowns.

For people getting bachelor's degrees, graduating with debt became more common than not in the 1990s. Now student debt isn't just common; it's becoming nearly universal. At public universities, 64 percent of graduates in the class of 2012 borrowed, and they took out around $25,600 in debt. At private universities, 74 percent of students borrowed, taking out around $32,300. Virtually all students getting four-year degrees at for-profit colleges borrow.

3) Those six-figure debts you hear about are pretty rare

The New York Times made a marketing major with $120,000 in loans the new face of student debt in 2012. But terrifying, six-figure loan debts for new graduates aren't typical. They very much are not, as this 2012 chart from the College Board shows: 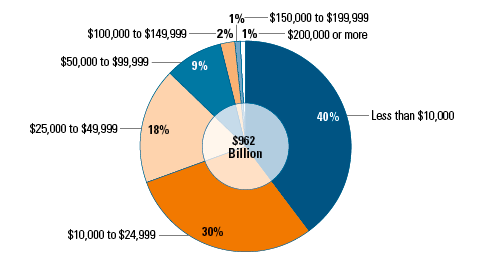 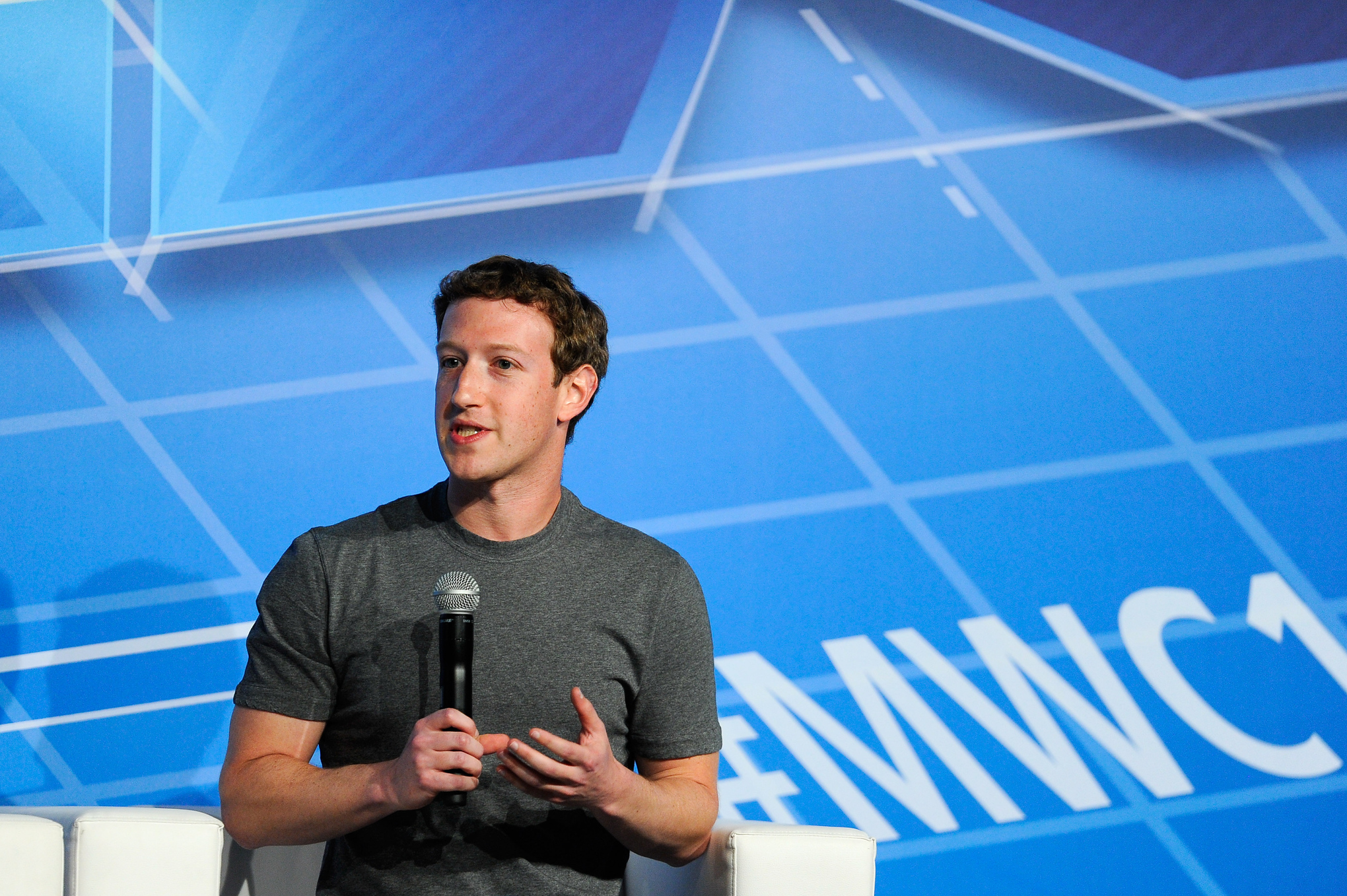 Whether you graduate from college is the best way to predict whether or not you will default on your loan, according to a 2009 review of research on student loan defaults. And because student loans usually can't be discharged in bankruptcy, default is an unparalleled personal finance catastrophe.

So the borrowers who don't finish their degrees are the group you need to be most worried about. Their financial picture is much, much worse than graduates'. Some don't worry too much about the rising debt burden on college graduates because college graduates' advantage over high school graduates in the labor market has stayed high. They borrow more, but they also get paid more. That's not as true for those who don't finish their degree.

Even worse, the ranks of borrowers who drop out have grown in the last decade: 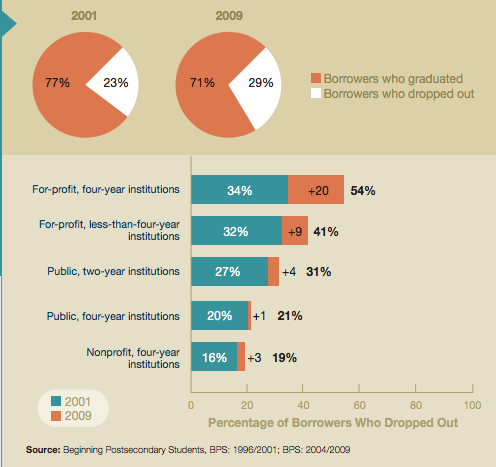 The Brookings report found that 41 percent of households with some college and no degree have debt, up from 11 percent in the 1990s. And their average debt has climbed too: 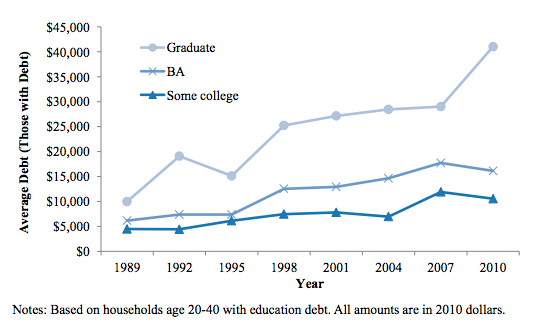 Getting a degree will leave you much better off than dropping out. But to get that degree, you have to go to college. And for most people, the choice isn't between a full scholarship and a student loan; it's between student debt and no college at all. So you can be struggling with student debt and yet be better off than you would be without it.
For students who manage to graduate, the data still says that student debt is a sound investment: 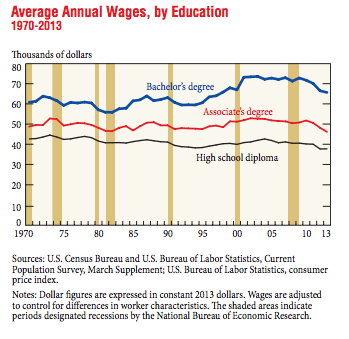 That's true even if you end up in a job that doesn't technically require a college degree, according to the New York Fed. The benefits of a college education still outweigh the costs: 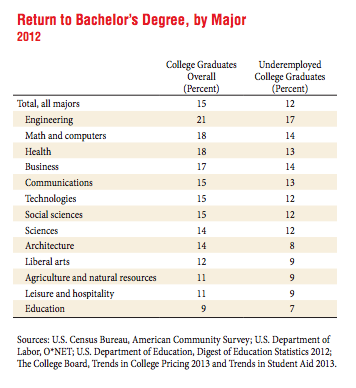 6) Whether you graduate matters most, but your major and your college matter too 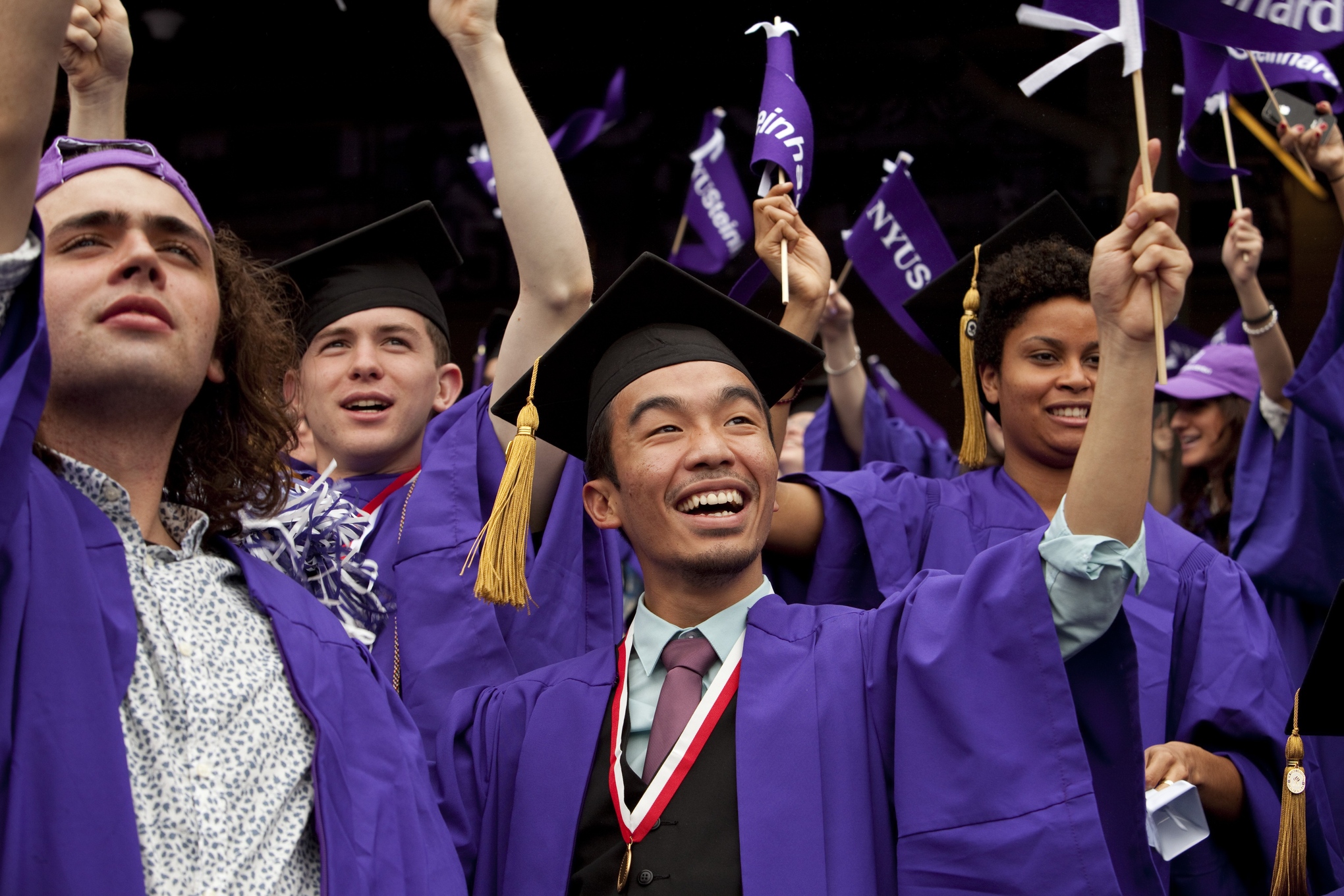 Rose-Hulman Institute of Technology, which mostly educates engineers, has very high student debt, but few people are losing sleep over engineers with more than $40,000 in student debt. They'll pay it off.

On the other hand, you might worry about an art major with an equivalent amount of debt. And there's good reason to be upset if students took on more than $40,000 debt for a career-oriented degree and then couldn't find a job to pay the loan back.

What if you could go to a state school debt-free, but take out loans so you can attend a private college with more cachet? That's a more complicated case.

A study in 2011 found that whether you choose the more selective college or the slightly less selective one (most big state universities are still considered somewhat selective in the grand scheme of things) doesn't affect your future income. But a more selective college made a difference for students who are black, Latino, or the first in their families to attend college. Those are the students who are more likely to need loans in the first place. 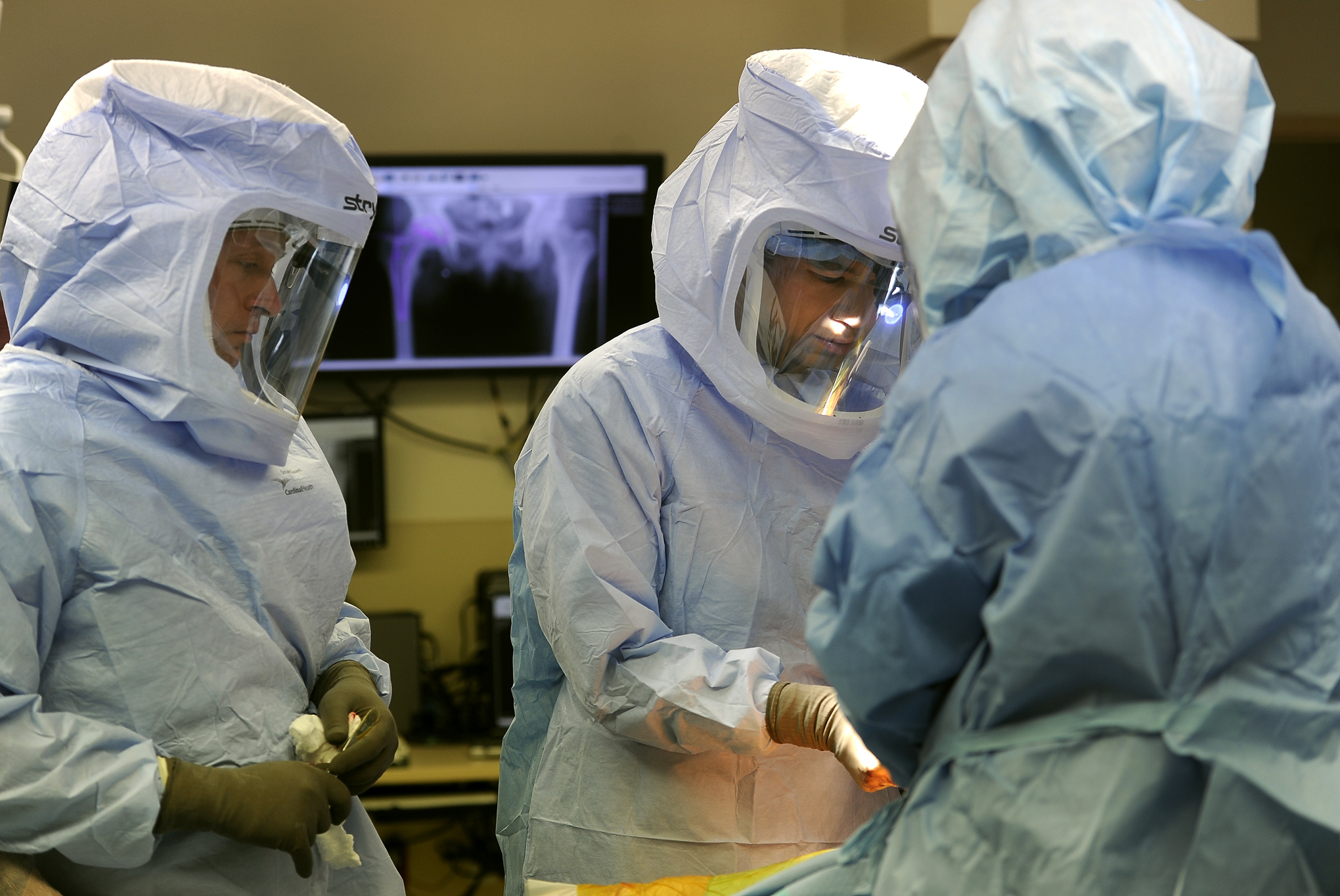 These surgeons almost certainly graduated with more debt than the hospital techs they work with. But they probably didn't struggle as much to pay the bills. Kathryn Scott Osler/Denver Post via Getty Images

The average borrower defaulting on a loan owes just $14,500. On the other hand, the typical medical school graduate owes around $161,772. Which one is in better shape?

Brookings found that, on average, debts are actually more manageable relative to borrowers' incomes than they were in the mid-1990s. But that only measured households who were actually paying back their loans. Those defaulters with relatively little debt aren't included in the study. 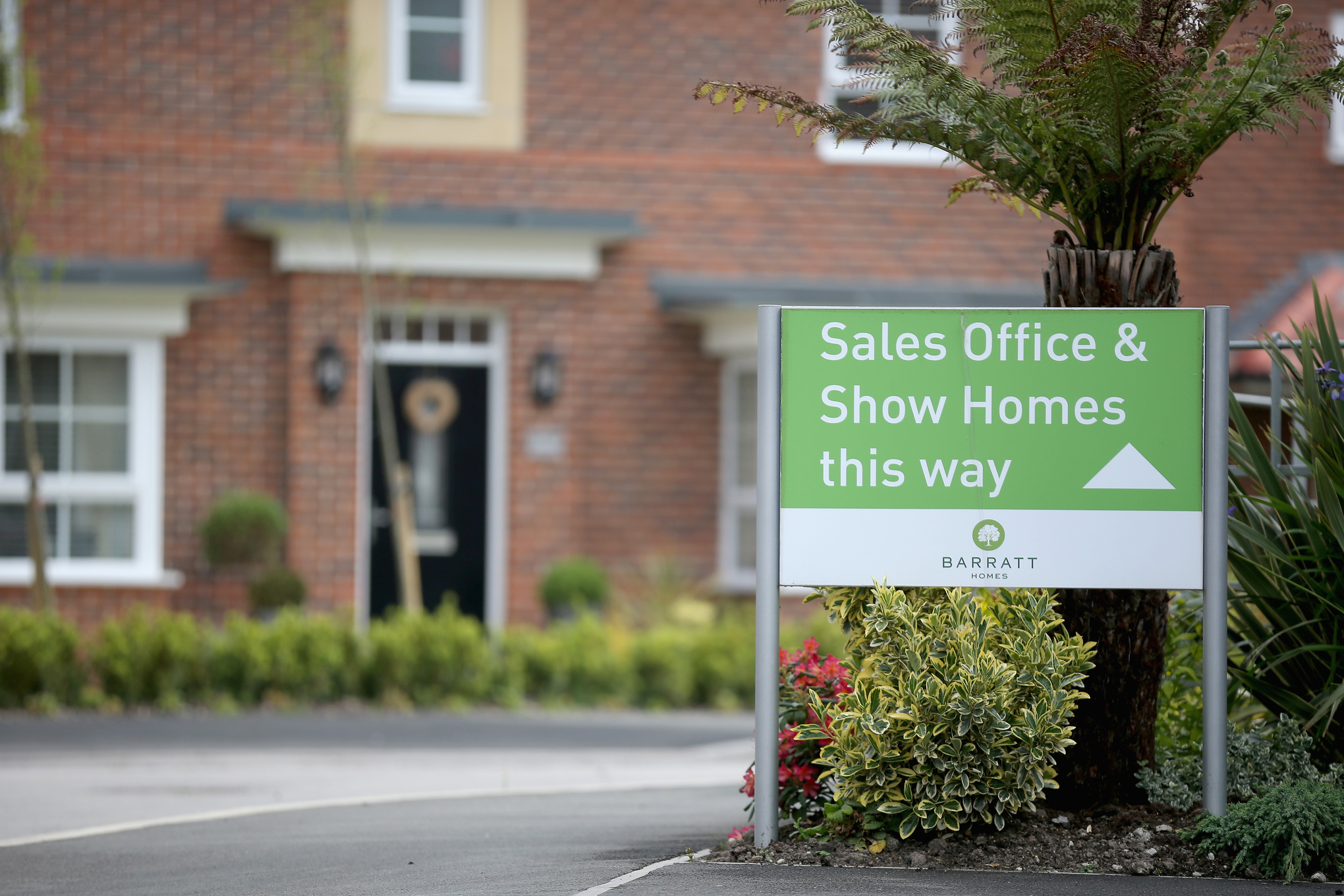 How much should we worry about student debtors not buying houses? Getty Images

The economic argument against student debt is that it's dragging down the economy: if you have student loans, you have less discretionary income. Your credit score is worse. You might not be buying a house.

The problem is that student debt data isn't available in real time. The Brookings study, for example, uses data from 2010. Until earlier this year, the most complete federal data on student borrowing was for the class of 2008 — students who didn't just start college before the recession, but who paid their final tuition bill before Lehman Brothers collapsed.
So knowing that people under 35 with debt aren't buying homes tells us something about young adults. But it doesn't tell us as much about what the newest graduates' lives will be like when they turn 35. We don't know if, like earlier generations, they'll mostly figure out a way to muddle through with their loans, or if we're going to reach a tipping point where the debt of the economy's otherwise most successful participants begins to weigh everyone down. 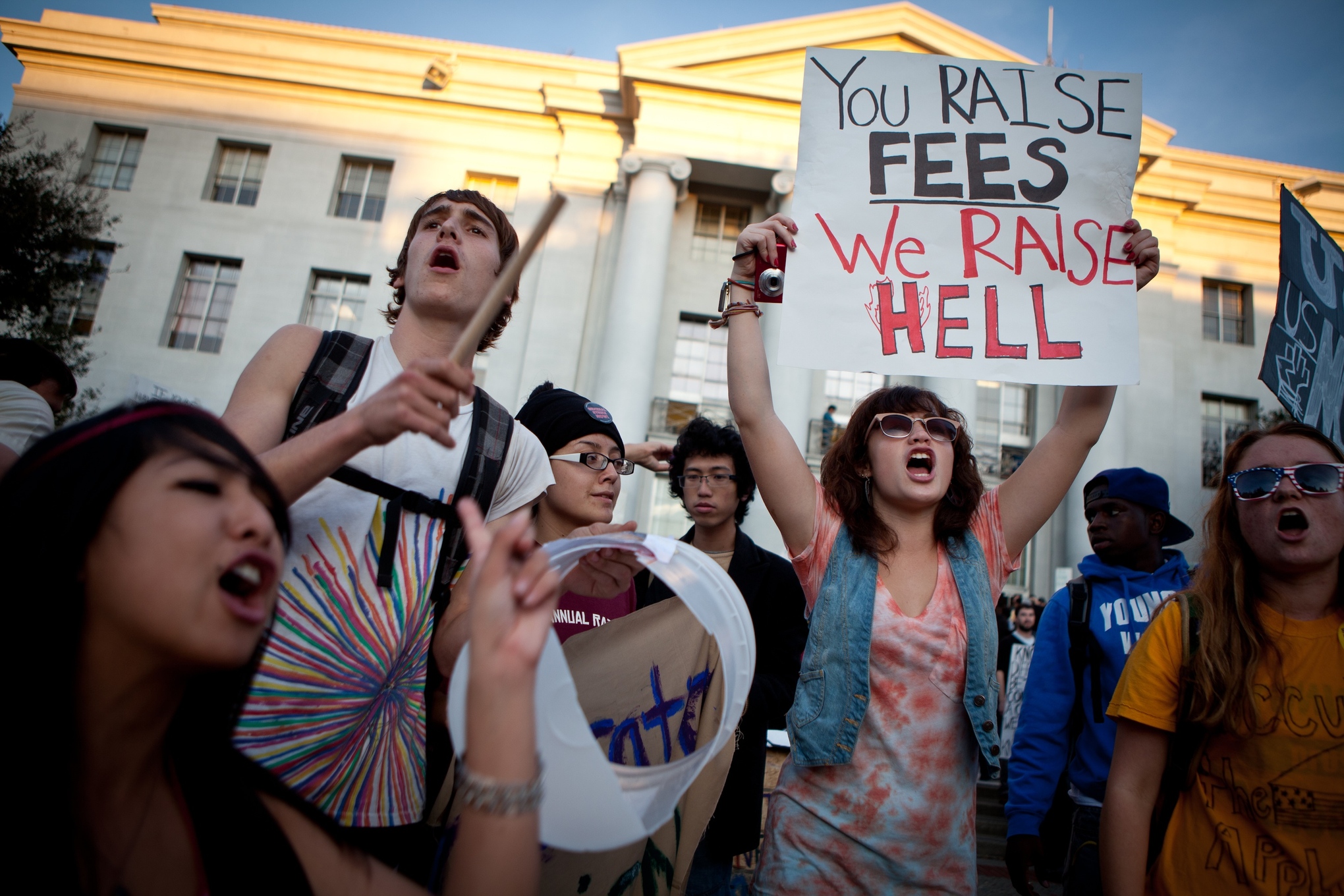 A protest over price increases at the University of California-Berkeley in 2011. Max Whittaker/Getty Images

You're a smart 18-year-old from a working-class family with the good luck to be born in California, which has some of the best public universities in the world. So you attend one of them, major in something that doesn't promise you instant riches — sociology, say, or English — and work a part-time campus job on the side.

Which scenario is more fair? Some would argue you're the one benefiting from the education with those lifelong higher earnings, so it's reasonable for you to pay the up-front cost. Others say that higher education benefits the nation, both economically and socially, so the nation as a whole should help pay.

The political argument about whether students should have to take on debt to pay for college is harder to answer than whether the debt ends up being worth it. Like all policy debates, it's about what the US values as a country — and about whether we're willing to spend taxpayer money on what we say is important.

Whether student debt is fair or right is a different question than whether a monthly payment is manageable. And it's not one you can answer with a chart.