The Insane Clown Posse's lawsuit against the FBI just got dismissed

Share All sharing options for: The Insane Clown Posse's lawsuit against the FBI just got dismissed

On Tuesday, Detroit-area federal judge Robert Cleland dismissed a lawsuit against the Department of Justice and the FBI filed by local horror-rap group the Insane Clown Posse and four of its fans, with the assistance of the ACLU. That's a real thing that's happening in the world we all inhabit. Here, watch ICP's Joseph Bruce (aka Violent J) introduce the lawsuit on January 8:

The group and the ACLU have said they'll appeal the decision, with Violent J declaring in a ACLU-released statement, "This is not the end. We’ll keep fighting to clear the Juggalo family name."

But let's back up. What's ICP's beef with the feds, and why is the ACLU on their side? And what the heck is a Juggalo?

What exactly does the lawsuit say? 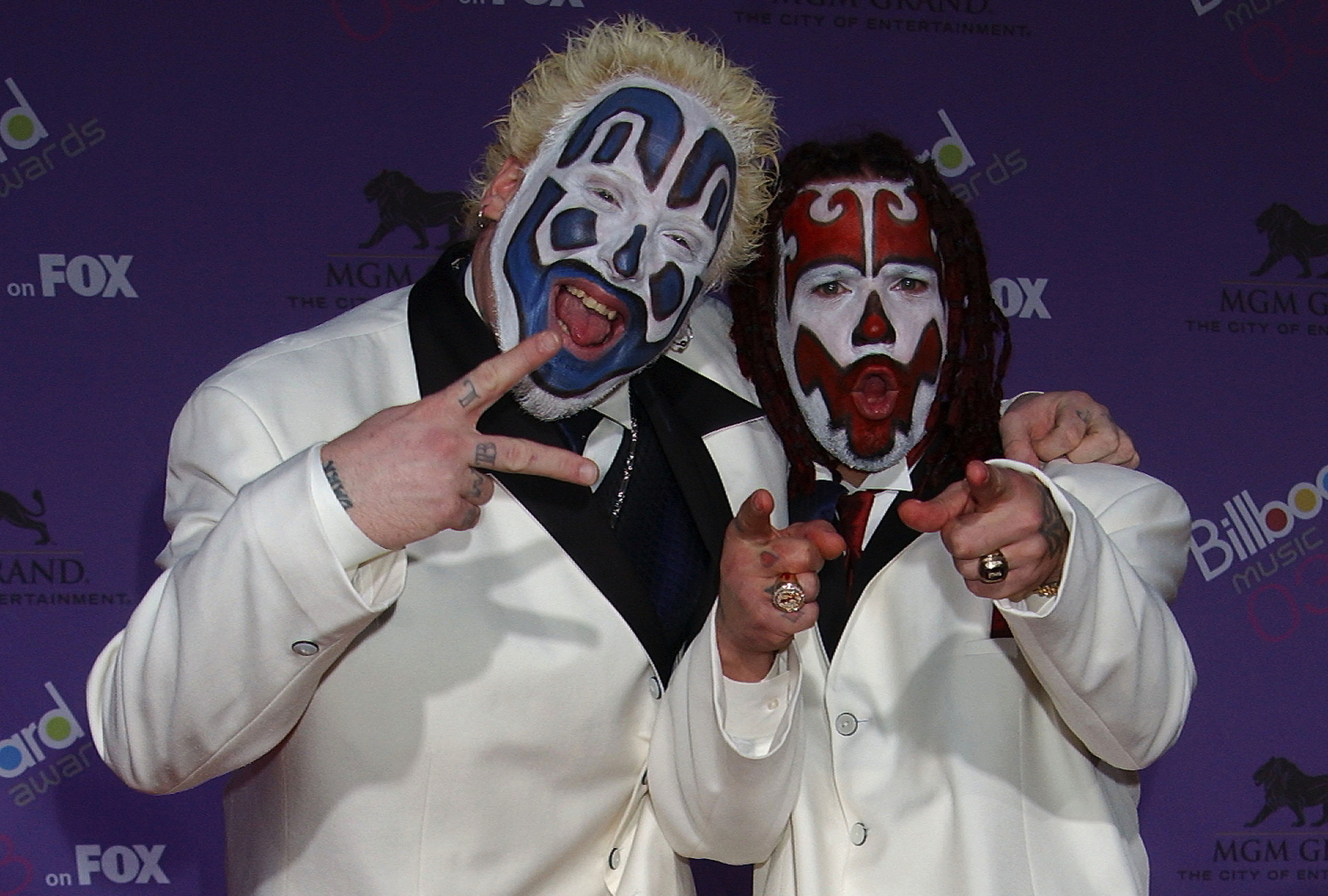 ICP in 2003, at the MGM Grand in Las Vegas. Photo by Gregg DeGuire/WireImage.

The lawsuit concerns the FBI's 2011 National Gang Threat Assessment, a report by the National Gang Intelligence Center (NGIC) which sought to "examine emerging gang trends and threats posed by criminal gangs to communities throughout the United states." On pages 22 and 23 of the report, the bureau goes into the threat posed by Juggalos, the term fans of the Insane Clown Posse use to refer to themselves. "Although recognized as a gang in only four states, many Juggalos subsets exhibit gang-like behavior and engage in criminal activity and violence," the report elaborates. "Law enforcement officials in at least 21 states have identified criminal Juggalo subsets." Another, even more breathless FBI document described Juggalos as "a violent street gang."

The complaint filed by ICP's Bruce and Joseph Utsler (aka Shaggy 2 Dope), along with four Juggalos, argues that while some Juggalos may have committed crimes, and perhaps even done so "while sporting the group’s logos or symbols," it is wrong to tar the Juggalo community as a whole by labeling it a gang. Worse than being wrong, it's a First Amendment violation, the complaint continues:

By classifying the entire group of Juggalos – which is overwhelmingly composed of law-abiding music fans – as some form of criminal gang, the DOJ and FBI have directly burdened Plaintiffs’ and other Juggalos’ First Amendment freedom of association. That classification burdens the Juggalos, including Plaintiffs, because they are Juggalos.

The suit also claims that the report threatened Juggalos' freedom of expression and that the designation of Juggalos as a gang was "unconstitutionally vague" under the Due Process clause of the Fifth Amendment. 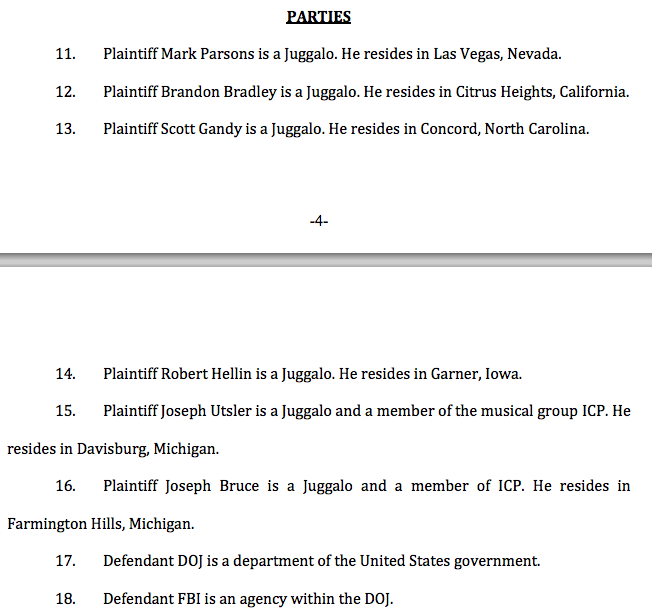 The greatest "parties" section of any civil complaint ever.

That's not all, though. The four Juggalo plaintiffs all claim to have suffered real harm as a consequence of the report's designation of Juggalos as a gang. For example, plaintiff Scott Gandy attempted to enlist in the Army and was rejected because of his Juggalo tattoo. Brandon Bradley was detained by police on three separate occasions due to his Juggalo tattoos and merchandise. On one of those occasions, an officer "translated his answers into gang-related terms" and entered them "into a gang information database that is part of or feeds information into the gang information database that the NGIC administers."

Bradley's case is especially notable because it not only was a concrete harm to someone that one could argue came about due to the Juggalo gang designation, but it in turn was (according to the lawsuit) treated as further evidence of Juggalos' gang tendencies, despite demonstrating nothing of the sort.

The DOJ's request to dismiss the case argues that none of the plaintiffs have standing to sue, as they cannot show that the report itself caused them any harms that can be redressed in court. "Each of the Plaintiffs asserts that some third party not before the Court caused some harm, or could cause some hypothetical future harm," it explains.

Take Bradley's case. First, the DOJ says, "it is unclear how being questioned by police officers in a public space constitutes an 'injury.'" Second, even if it were an injury, the DOJ argues that because Bradley was in California, which already considered Juggalos a gang, it was implausible to blame the incident on the DOJ report: "There is public information about Juggalos outside of the 2011 NGIC Report that the officers may have considered in deciding to approach Mr. Bradley."

Same goes for Gandy and all the other cases. There's nothing in the suit, the DOJ claims, proving that any of these people were harmed by the report itself, rather than by third parties who may or may not have been influenced by the report. And that doesn't just meant that the plaintiffs lack standing, the DOJ argues: it means that the department could not have committed any of the claimed constitutional violations, and that it cannot redress any of the harms allegedly endured by the plaintiffs, as it didn't cause those harms in the first place.

Are Juggalos a violent street gang?

A fan at the 2012 Gathering of the Juggalos, courtesy of Mutantmandias/Flickr.

Nope — at least not as a group. A Juggalo, again, is just a fan of the Insane Clown Posse, or perhaps a particularly fervent fan. Even the FBI concedes that "most crimes committed by Juggalos are sporadic, disorganized, individualistic, and often involve simple assault, personal drug use and possession, petty theft, and vandalism," and that only a "a small number of Juggalos are forming more organized subsets.

"I think it's ridiculous to consider the Juggalos a gang," Camile Dodero, who wrote one of the first major pieces in the mainstream press on Juggalo culture for the Village Voice in 2010, told Reason for their mini-documentary on the case. Dodero notes that Juggalos are, by and large, economically disadvantaged, making them easy targets for law enforcement; it's worth asking whether a similarly large fan group in a more privileged societal position would be receiving the same kind of treatment:

The question then is whether, in dealing with these subsets, it's useful to refer to "Juggalo gangs" as a thing. The 2011-era FBI, or at least the NGIC, thought so, citing specific groupings of Juggalos ("Juggalo Ryder Bitch," "Juggalos of Statesville [NC]," "Red Hatchet Representing") which, though a distinct minority of the overall community, are nonetheless defined by a shared Juggalo identity.

Worse, the FBI sought to link the specific groupings with other, better established gangs: "Juggalo sets such as Eastside Juggalos have been in contact with several Blood sets and some have accompanied Bloods during or have been present when crimes have been committed…Juggalos in Northeast and West Texas have been reported to affiliate in the county jails with dominant White Prison Gangs such as the Aryan Circle and the Aryan Brotherhood."

A report from the Rocky Mountain Information Network in 2010 by Arizona Department of Public Safety sergeant Michelle Vasey reached similar conclusions. But Vasey is careful to note (more careful than the FBI, certainly) the importance of distinguishing between small, specific groups of Juggalos who start gangs from the Juggalo movement as a whole, concluding, "we in law enforcement must be willing to take that extra step in our intelligence gathering to see if we are in fact dealing with a gang member or just a crazed fan."

But that's no reason to tarJuggalos as a whole, says Douglas Fort, a criminologist and gang expert. The legal requirements for something to count as a "gang" are often more stringent than that, he notes. California requires an act been undertaken under the direction, in association with, and for the benefit of an organization to qualify as a gang activity. That's hard to jibe with the "sporadic, disorganized, individualistic" behavior of Juggalo criminals cited by the FBI. And the structure of real, bona fide gangs like the Bloods or MS13 is much more formalized than how Juggalo subset gangs. Fort suggests that the over-application of the term "gang" could be a ploy for federal funding. "There's money attached to gangs," he says. "So what law enforcement would do is say this particular thing is a gang and we need money to suppress it." But for Juggalos, Fort says, "to label them a gang, I think they went too far."

So are Juggalos writ large a gang? No, not any more than Deadheads were or Beliebers are. If you believe law enforcement (and they've gotten this kind of thing wrong before, so skepticism is warranted), there are small groups of Juggalos who cloak criminal activity in the Juggalo name, but they're hardly representative of the movement as a whole.