The food stamps cookbook: how to eat for $4 a day

Share All sharing options for: The food stamps cookbook: how to eat for $4 a day

A person could easily spend $4 on a pint of fancy ice cream or a tiny filet of salmon at their local grocery store. But Leanne Brown set out to make a cookbook for Americans with a food budget of $4 per day. Brown's Good and Cheap, currently the focus of a wildly successful Kickstarter campaign, aims to make good food more accessible to Americans on the Supplemental Nutrition Assistance Program (SNAP, often called food stamps). Though Brown has crafted a pretty cookbook, the question is how practical this approach is.

The idea of the book — which started as Brown's capstone project for her master's degree in food studies at NYU — is to promote the idea that poorer Americans can eat good, healthy food. That $4 figure she works off of is one common shorthand for how much SNAP recipients receive per day (though that varies by family size and income, and the program is also meant to supplement people's food budgets). A PDF of the book is available for free here.

The book more than succeeds in making low-cost cooking look appetizing. Thanks to artful photos of cheap, fashionable vegetables like kale and broccoli rabe, many of the foods wouldn't look out of place in a Mark Bittman column or on Martha Stewart's website. There's also something to be said for lending some dignity to a difficult food situation. But even though individual recipes could be entries in a foodie blog, the overall diet is rather more restrictive.

In the process of creating recipes, Brown discovered exactly which foods are luxuries. Certain types of fresh produce, for example, will be tough to buy on a SNAP budget.

"In the summer we all really want to eat things like fresh berries and these juicy wonderful fruits, and berries are expensive," she says. "In general, if you're thinking in terms of calorie density, they're a tough choice to make."

Frugality has helped to make Brown's recipes largely vegetarian — in salads and pasta dishes, chickpeas, beans, and eggs are often the protein sources of choice. Grains also feature heavily — one section praises toast as an inexpensive vehicle for salads and leftovers. Certain cheaper vegetables, like potatoes and eggplants, pop up often, while more expensive vegetables like avocados don't make it in.

But is it practical to Bittmanize the food stamp budget?

Other writers at Salon and the Wall Street Journal have written that it is more than doable to eat healthfully on food stamps, and the USDA also has a deluge of brochures on how to make it work. But one writer at Atlanta magazine described it perfectly earlier this year when she and her husband decided to eat on a food stamp budget for a week.

"WORKING MOTHERS CAN FOLLOW [USDA] GUIDELINES AND PREPARE LOW-COST NUTRITIOUS FOODS OR CAN HAVE A PAYING JOB ... BUT MAY FIND IT DIFFICULT TO DO BOTH"

"[O]ur situation embodies the best-case scenario USDA nutritionists have in mind when they produce brochures on healthy cooking tips: We have time to cook, we have a well-equipped kitchen, and mostly importantly we have a car and thus can shop around for the good deals and quality foods," wrote Rebecca Burns.

In a 2010 paper, researchers from the University of Washington and Bastyr University found that the USDA's Thrifty Food Plan, which is used to set SNAP benefit levels, might not be feasible for low-income Americans for a number of reasons. One of those is "time poverty." Researchers found that cooking foods on the plan often meant a low-income family had to spend more than the normal amount of time on kitchen prep.

"Working mothers can follow TFP guidelines and prepare low-cost nutritious foods, or can have a paying job outside the home, but may find it difficult to do both," they wrote. And while Brown's cookbook is distinct from those USDA plans, one can imagine that after working long hours, persuading picky children to eat potato and kale rolls sounds unappealing.

Since writing the cookbook, Brown has acknowledged the potential shortcomings of a SNAP cookbook. Already on her Kickstarter page she has responded to criticisms that the cookbook assumes users have kitchens and appliances, not to mention access to fresh vegetables. 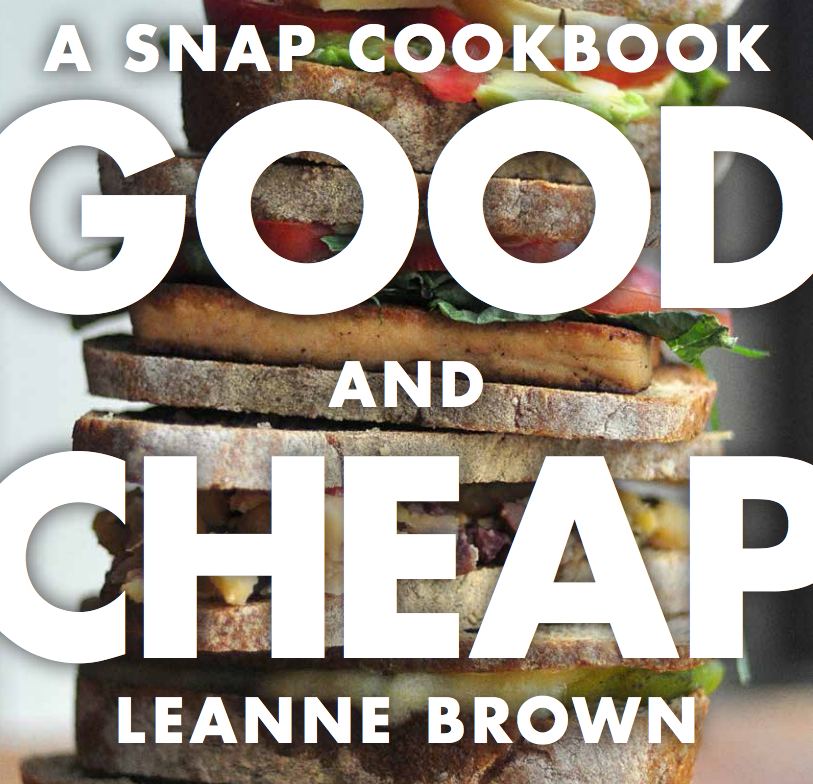 The cover of Brown's cookbook

"i hope [the cookbook] is helpful, but I know it's still not going to be easy to get by on a regular basis."

Brown stresses that the point isn't to make living on SNAP benefits look easy. The point is to make it a bit easier.

"I hope [the cookbook] is helpful, but I know it's still not going to be easy to get by on a regular basis," she says. "To really have a truly amazing diet you have to spend a lot of time in the kitchen, and I know a lot of people won't be able to do that."

In that sense one can see the cookbook being useful to the low-paid (or unpaid) intern or college student, as much as it is to the typical SNAP family.

A New York City resident herself, Brown also says writing the cookbook highlighted for her one more limitation of the SNAP program.

"Someone in rural Kansas has really different food issues — they have different access and different prices and different barriers than someone who lives in urban NYC," says brown. "Currently SNAP is such a nationalized program that it doesn't address some of those regional variations very well. Certainly more research could go into that."