The Central American migrant crisis isn't just a US problem, in one chart

Share All sharing options for: The Central American migrant crisis isn't just a US problem, in one chart

When the Office of the UN High Commissioner for Refugees put out its report on the child migrant crisis in February, it offered some telling information that the issue was regional — not just about the US. (emphasis in the original):

"The number of requests for asylum has likewise increased in countries other than the U.S. Combined, Mexico, Panama, Nicaragua, Costa Rica and Belize documented a 432% increase in the number of asylum applications lodged by individuals from El Salvador, Honduras and Guatemala."

UNHCR now has numbers for 2013 as well, and they're striking: those countries got 712 percent more applications for asylum in 2013 than they had in 2008. Here's the chart: 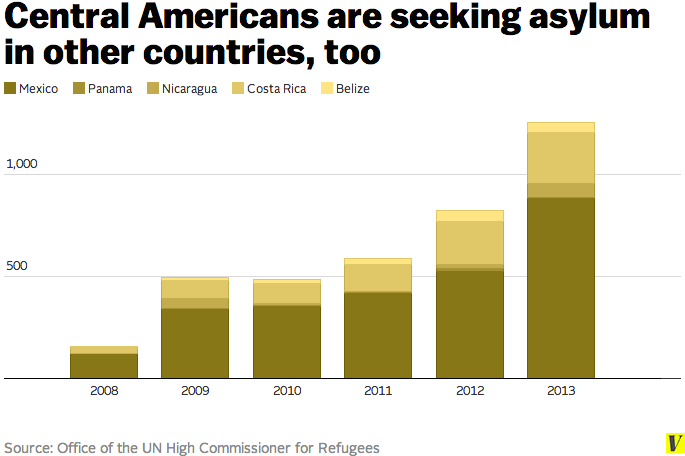 It's a pretty strong rebuttal of the belief that US government policy is a primary driver of the current crisis.

Furthermore, none of these countries have nearly the capacity to take in asylum seekers that the US has. So even though the US is still getting the overwhelming majority of asylum seekers from Central America, the rapid increase in countries like Nicaragua (which saw a 240% increase from 2012 to 2013 alone) could represent a huge overload for their government.

That raises the question of what would happen if the US tried to beef up enforcement to block future asylum-seekers from crossing the border. Presumably, the US would have to assume that other countries would take them. But who would have as much capacity to do so as the US?