Why Dr. Oz can say anything and keep his medical license

Share All sharing options for: Why Dr. Oz can say anything and keep his medical license

It's been known for years that Dr. Mehmet Oz uses his television show to promote medical care that does not work, everything from bunk weight-loss prescriptions to homeopathy. Journalists at news outlet after news outlet have outlined his many sins against science. As Sen. Claire McCaskill, who dragged Oz up to Capitol Hill for a hearing last week, told him: "The scientific community is almost monolithic against you in terms of the efficacy of those three products that you called miracles."

This all raises the question: why does Dr. Oz still get to call himself a doctor? Oz has maintained his medical credentials, university faculty and hospital positions, all while giving potentially harmful and often ridiculous medical advice to his millions-strong audience. John Oliver argued this weekend that, at this point, a more appropriate title for Oz's show would be one that dropped his medical credentials: "Check this shit out with a guy named Mehmet."

The fact that Oz hasn't lost any credentials speaks to a larger challenge in modern medicine: Once you get a medical license, its actually really difficult to lose it.

"This has been a longstanding complaint with medicine and the professional regulation. You either need to have sex with patients who file a complaint, be a really bad substance-using person... or you're malpractice-level bad as a doctor," David Jones, professor of culture of medicine at Harvard University, says. "Nothing in Dr. Oz's conduct is even close to getting the attention of the state boards because they are dealing with sex criminals, alcoholics, and gross misconduct."

There's a handful of organizations that, in some way or another, give Oz their licensing blessing to continue his work. All of them had a reason why they hadn't taken any steps to strip the doctor of his credentials.

The AMA—the steward of the medical profession and the largest professional organization of doctors—has ethics guidelines that do address some of the problems with Oz's work. "There are ethical opinions the AMA puts out that say that a physician is always going to be truthful and not going to mislead patients," an AMA spokesperson says.

For example, the AMA Code of Medical Ethics states, "It is unethical to engage in or to aid and abet in treatment which has no scientific basis and is dangerous, is calculated to deceive the patient by giving false hope, or which may cause the patient to delay in seeking proper care." But this provision falls under the category of "nonscientific practitioners" (i.e., naturopaths) and would not apply to actual MDs like Oz.

What's more, the AMA cannot enforce any of its rules. That's up to the states, which license and regulate doctors. "The AMA is a voluntary membership organization," says the spokesperson. "We are not vested with any authority at the state or federal level."

Neither will the New York State Department of Health

So what about the state? A spokesperson at the department of health in New York, where Oz is licensed, pointed to the definitions of physician misconduct. According to the New York code, doctors are prohibited from, "Advertising or soliciting for patronage that is not in the public interest... is false, fraudulent, deceptive, misleading, sensational, or flamboyant."

"the medical profession has made oz one if its most credentialed guild members."

On its face, that restriction would seem like the exact type of regulation that would shut Oz down. But it's not so easy: As Stephen Latham, a lawyer and director at the Yale Interdisciplinary Center for Bioethics explains, it's actually drafted to stop doctors from profiting from their own snake oil.

Oz is not practicing medicine when he calls supplements "magic weight loss cures" or "lightening in a bottle" on TV. He also  denies any financial stake in the products he features on his show, so the state regulator has no grounds on which to go after him. 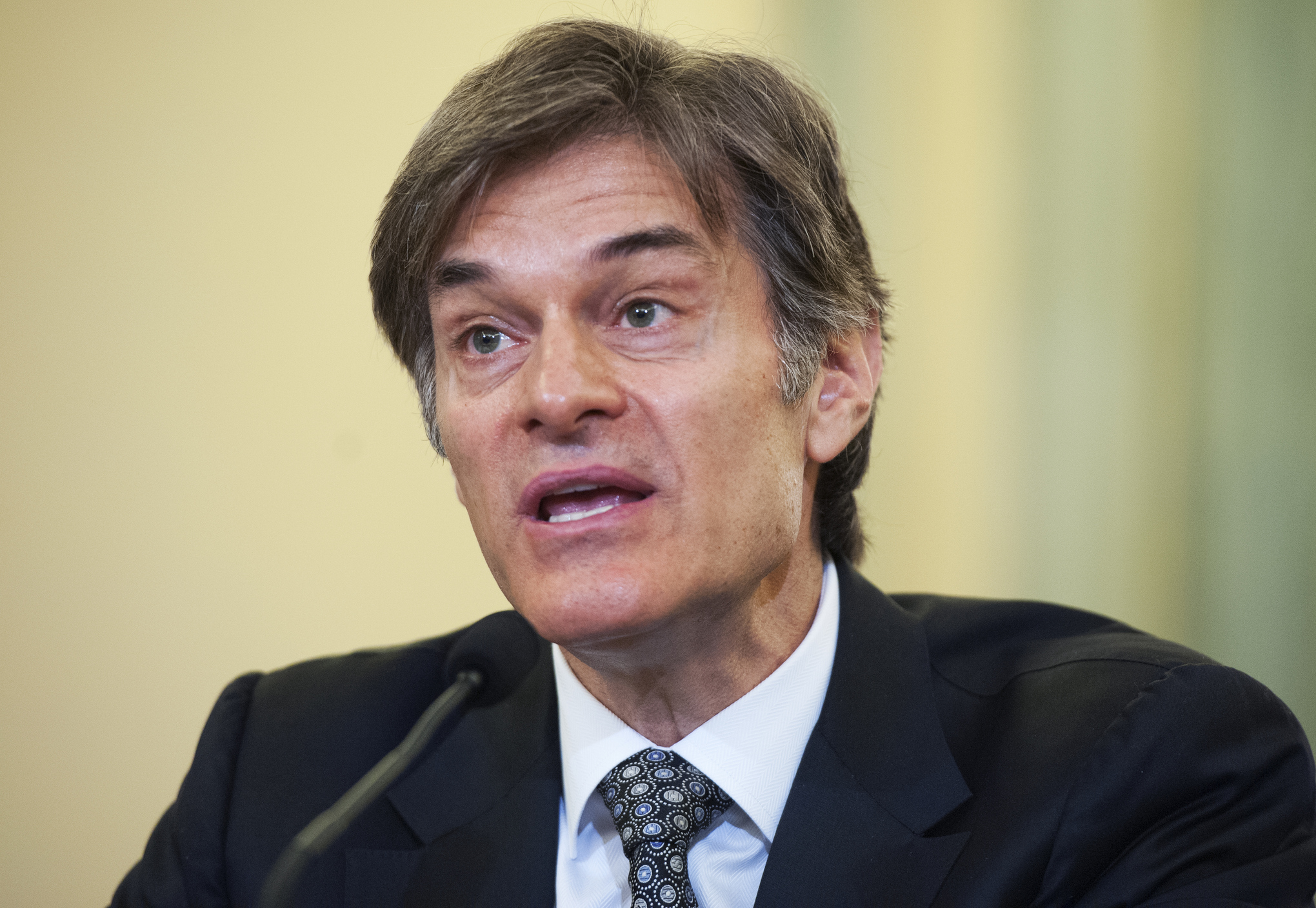 A lot of Oz's influence rests on his impressive credentials, not only as a doctor, but also as faculty and vice-chairman of the surgery department at Columbia University, one of the leading medical schools in America. But they also take a hands-off approach.

"We do not regulate faculty speech," Columbia University Medical Center's chief communications officer, Doug Levy, said. Cracking down on the bogus claims Oz makes in public is outside of the university's purview. "There are faculty members at Columbia who disagree with him, and that's great. We think that's a healthy thing."

What about the federal government?

The Federal Trade Commission has the legal authority to prosecute people who mislead and injure consumers. They've also been waging war on weight-loss scams, recently suing the makers of some of the very products Oz has featured on his show. But they too say they can't do anything about Oz since, once again, he's not actually selling the products he talks about.

Mary Engle, Associate Director of the division of advertising practices at the FTC, explained that it's a matter of free speech. A person's speech in America is protected by the First Amendment—unless it's commercial speech, which can be regulated by the government. "Talk show hosts, if they are not selling a product, if they don't have a financial stake in the product in any way, then their speech is fully protected," she says.

Doesn't this add up to an Oz-shaped loophole?

Steven Hoffman, an international lawyer and visiting professor at the Harvard School of Public Health who has written about Oz's medical advice, thinks so. He said medical-regulatory systems need to change so that doctors like Oz are held to account.

"The medical profession has made Oz one of its most credentialed guild members. But he has a long history of crazy practices. For some reason, he's able to practice mass medicine on millions of virtual patients, which means regulations have not caught up to where they need to be."

Correction: An earlier version of this article stated that "most" doctors are members of the AMA. While the AMA is the largest professional association for doctors, less than 30 per cent of active physicians are members.