Share All sharing options for: This chart shows that violent deaths at US schools remain quite rare

Are US schools getting increasingly violent? According to one estimate, there have been 74 school shootings since the December 2012 attack at Sandy Hook Elementary School. But another analysis shows violent crimes declining at schools for 20 years. Now, Drew DeSilver of the Pew Research Center has decided to analyze on all violent deaths associated with elementary and secondary schools — here's what he found: 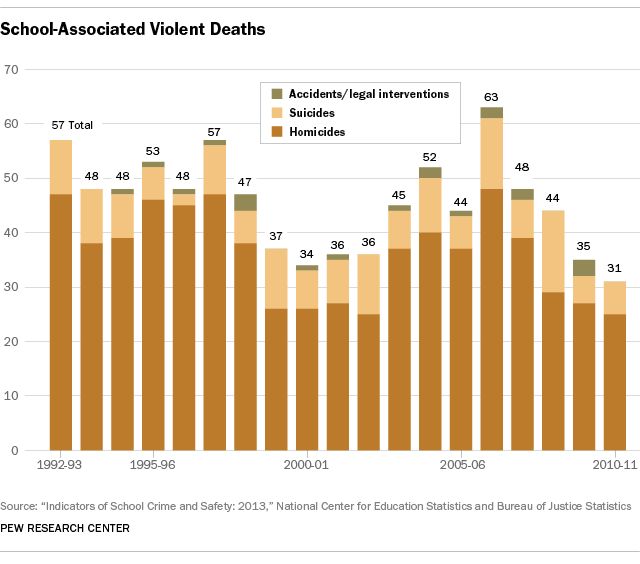 DeSilver's estimate, drawn from a recent report by the National Center for Education Statistics and the Bureau of Justice Statistics, includes all violent deaths that occurred on school grounds, or during travel to or from school or a school-sponsored event. The chart drives home that these deadly events are still quite rare — and that there's been no clear upward trend in them since the 1990s.

Now, there's a time lag in those government statistics, so they don't yet include the Sandy Hook shootings, when Adam Lanza killed 26 people and himself. DeSilver estimates that there were 44 school-associated violent deaths that year, which matches the number from 2008-2009.

And death statistics can't tell you everything. For instance, they could decline because there are fewer violent events overall — but they could also fall because the violent events that do occur are less deadly, potentially due to improved medical care or emergency response. DeSilver does point out, though, that the overall homicide rate per 100,000 people has been cut in half since 1993, but that school homicides haven't seen a similarly consistent decline. Head over to Pew for his full analysis.