Americans believe their health system is the world's best, but they’re measuring it wrong

Share All sharing options for: Americans believe their health system is the world's best, but they’re measuring it wrong

Americans like to think their health-care system is number one. But a 2014 report from the Commonwealth Fund compared it with 10 other developed nations and found it's ... number 11.

America spends vastly more than any other nation but, uniquely, leaves tens of millions uninsured. Patient satisfaction is low, and the rate of medical errors is high. Infant mortality is worse in the United States than in its competitors, and so is life expectancy. America's reputation for efficiency is also shattered: both American patients and American doctors report spending unusually large amounts of time on paperwork.

And then, of course, there's this graph, which shows America's health-care spending doesn't seem to be buying us much health: 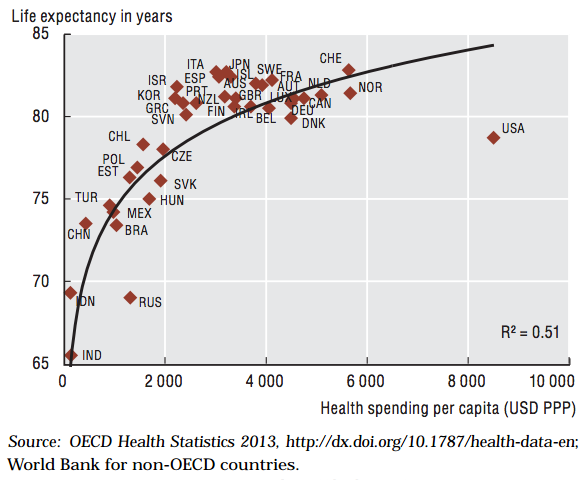 None of these measures are perfect reflections of the American health-care system's flaws. Life expectancy, for instance, depends on much more than just medical care: the US lags in part because so many Americans die in car accidents and shootings. Patient satisfaction might tell you more about bedside manner than it does about medicine. There were plenty of satisfied patients in the days of bloodletting.

Take cancer. Studies show that survival rates for major cancers are better in America than they are in other developed nations. A 2012 study led by the University of Chicago's Tomas Philipson, for instance, concluded that cancer patients diagnosed between 1995 and 1999 lived an average of 11.1 years after diagnosis in the United States, but only 9.3 years after diagnosis in Europe. America, in other words, is getting something for all that extra spending.

In a health-care system, not all failures carry the same weight

In a health-care system, not all failures carry the same weight. Spending lots of time on paperwork is annoying, but when it comes down to it, what you really want is for doctors to keep you from dying. If American doctors are better at curing cancer than their European or Japanese counterparts, then the American health-care system's other flaws are barely feathers on the scale.

The only problem? It's incredibly hard to figure out whether the American health-care system actually is better at treating cancer.

The problem with survival rates

Most of the studies that highlight America's skill in treating cancer do so by measuring survival rates — that is to say, they measure how many people survive for a certain number of years after the cancer is diagnosed. So if a certain cancer kills 50 percent of people within five years, then the five-year survival rate is 50 percent.

The problem here is simple: survival rates don't necessarily measure when people die. They also measure when they're diagnosed — and sometimes, that's all they measure.

"Let's say there's a new cancer of the thumb killing people," writes Aaron Carroll, a professor of pediatrics and assistant dean at Indiana University's School of Medicine. "From the time the first cancer cell appears, you have nine years to live, with chemo. From the time you can feel a lump, you have four years to live, with chemo. Let's say we have no way to detect the disease until you feel a lump. The five year survival rate for this cancer is about 0, because within five years of detection, everyone dies, even on therapy."

Carroll goes on to imagine a remarkable machine: "a new scanner that can detect thumb cancer when only one cell is there." Congress immediately orders that every American be scanned for thumb cancer. "We made no improvements to the treatment," he writes. "Everyone is still dying four years after they feel the lump. But since we are making the diagnosis five years earlier, our five year survival rate is now approaching 100%!" That's how survival rates can mislead.

"As a culture, we have been inundated with this message that early detection is the key," Carroll said in 2014. "We want to know now if we have it. We think if we know we'll have a much better chance of having a good outcome. And sometimes that is the case. But it's rarer than people think."

Perhaps the most famous example is mammograms. Almost everyone knows mammograms save lives. One survey found that 50-year-old women think mammograms save 80 lives for every 1,000 screenings. But mounting evidence suggests mammograms have been wildly oversold. A rigorous study of 90,000 women concluded that "annual mammography in women aged 40-59 does not reduce mortality from breast cancer beyond that of physical examination." And the screenings have costs, too: 22 percent of the invasive breast cancers caught by mammograms were "overdiagnosed," leading to expensive, scary, and potentially dangerous treatments for women who didn't need them.

That isn't to say early detection never helps. It really does matter for colorectal cancer, for instance. But it doesn't help for all cancers, and too much screening leads to dangerous overtreatment. In some cases, the America's aggressive screening programs are saving lives. But in some cases, they're almost certainly hurting people.

The simple measure: how many people die from cancer?

In recent decades, America has gotten much, much better at screening for cancers. But it hasn't gotten that much better at curing them. In "Preventing overdiagnosis: how to stop harming the healthy," Ray Moynihan, Jenny Doust, and David Henry chart the rapidly rising diagnoses of various cancers  —the blue line  — against the actual death rates from those cancers. As you can see, the blue line rises like a rocket on each graph. The red lines are relatively flat. Disturbingly flat.

("Preventing overdiagnosis: how to stop harming the healthy")

A lot of those cancer diagnoses are picking up malignancies that will never cause symptoms, let alone death. But they make survival rates look a lot better.

"The best measure for progress against cancer is mortality rates," said Ahmedin Jemal, vice president for surveillance and health services research at the American Cancer Society, in a 2014 interview. "Not survival rates, because they can be inflated by early detection." The best measure, in other words, is those red lines.

The difficulty is that cancer mortality is affected by much more than just the health-care system. Prevention matters, as does environment, and lifestyle, and population. Some groups are simply more prone to cancers than others. Some national diets lead to more cancers than others. Brazil and Mexico have low cancer mortality, but no one would say that the Brazilian or Mexican health-care systems are the finest in the world.

Still, a straight look at cancer mortality shows America looks a lot like its peer nations — and certainly not like a country that often spends twice as much on health-care treatment. There is considerable variation among cancers — we look pretty good on breast cancer and colorectal cancer mortality, but pretty bad on lung cancer mortality — but overall, this graph from Carroll doesn't show a country with extraordinarily low cancer mortality:

There is good news here. Data from the OECD shows that between 1990 and 2011 all-cancer mortality has been falling a bit faster in America than in peer nations: 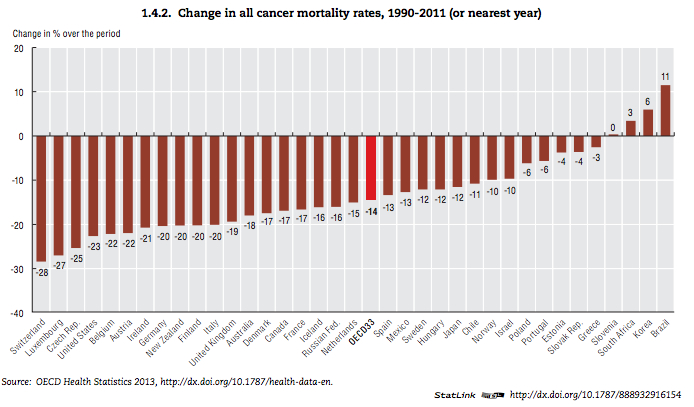 It's not clear, however, how much of the drop is due to the American health-care system. "The main reason for the decrease in the US is due to prevention because of tobacco control," says Jemal, though "improvements in early detection and treatment" also play a role.

That's the problem with using mortality rates: so much goes into whether a person develops and dies from cancer that it's almost impossible to untangle how much our health-care system — or any other country's — is doing to save them. You can't run an experiment where you randomly give people cancer and then randomly treat them in different countries.

The impression you get from talking to cancer researchers is that America's health-care system is great — so long as you can actually access it. There's no doubt that the United States has many of the world's best doctors and hospitals and can deliver some of the world's best cancer care. But it's probably better to be insured in Paris with a lump than uninsured in Baltimore with a lump. America's health-care system is the most unequal in the developed world:

"The potential is there in America for the best cancer care in the world," said Carroll. "But if I'm rolling the dice, do I think the average American who gets cancer is getting better care than the average French person? That's a harder question. I'm not sure we know."

The other impression you get from talking to cancer researchers is that this whole conversation is part of a broader problem: Americans overemphasize the role the health-care system plays in health and underemphasize the role of, well, everything else.

"The low hanging fruit is always in prevention," says Jemal. "Smoking, for example, still accounts for 30 percent of the cancer cases in the US."

At the Upshot, Carroll runs through a new study looking at cancer mortality in the US and 20 Western European countries. America looks good — if incredibly, insanely expensive — on breast cancer, prostate cancer, and colorectal cancer. But America looks terrible on lung cancer, melanoma, and cervical cancer — all cancers, incidentally, where prevention can have a huge impact, and do so at fairly low cost.

This speaks to a larger issue that the American health-care debate doesn't quite know how to handle: the deficiencies of the health-care system matter, but they're not the main reason Americans, or anyone else, gets sick. For the most part, health happens outside the walls of hospitals. For all the attention the medical system gets, improving it probably isn't the fastest or most direct way to improve people's health.

These 15 charts show our health care prices are totally insane

Watch: The dysfunction of the American health-care system