How America's growing partisan split could be making the rich richer

Share All sharing options for: How America's growing partisan split could be making the rich richer

Everyone knows political polarization is on the rise. Everyone knows economic inequality is, too. A new analysis proposes ways the two may be linked.

On the New York Fed's Liberty Street Economics blog, Rajashree Chakrabarti, senior economist at the Federal Reserve Bank of New York, and research analyst Matt Mazewski dig into why these two phenomena might be connected. One key thing they find is that the share of income that goes to the top 1 percent is closely correlated to the difference between Republicans' and Democrats' DW-NOMINATE scores, a measure of their political positions based on roll call votes. The higher the difference, the higher the polarization. 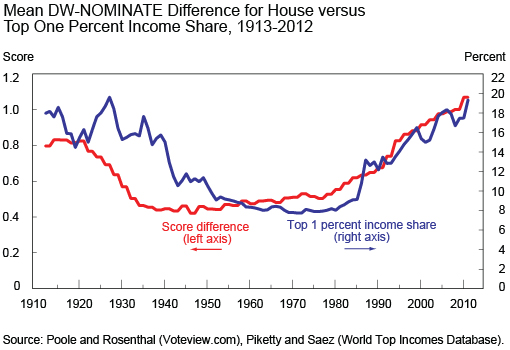 The study, first reported by Business Insider, finds that changes in polarization tend to happen ahead of changes in inequality. The correlations were more modest until Chakrabarti and Mazewski pushed the polarization scores forward by a few years. When they advanced it by 5 and then 10 years, the correlations grew stronger with each shift. In addition, they found that polarization in the House is more strongly correlated with inequality than in the Senate.

It wasn't just the top 1 percent's income that showed this correlation, either; the authors report similar results from using the income of the top 10 percent and the Gini coefficient, one popular measure of inequality.

Exactly what's behind this link is much murkier. All sorts of complex factors contribute to polarization and inequality alike, and it's not perfectly clear if and how one causes the other — importantly, this study only suggests correlation, not a direct cause.

polarization may not just be an obnoxious trend. a polarized congress may be a sign of or cause of economic problems

But if there is a causal link, there are a couple potential explanations why. One possibility the authors consider is "policy drift" — the idea that gridlock means policies stay the same, even while the world changes around them. When some policies fail to move and become outdated, it means rising inequality. The minimum wage might be the clearest example of this — inflation means the real minimum wage is almost always falling.

Financial regulation also could be a factor, write Chakrabarti and Mazewski. Increasing polarization combined with a broader rightward political shift can mean less financial regulation, which can benefit the richest Americans, they write.

This connection between polarization and inequality isn't a new idea. In the 2006 book Polarized America, political scientists make the case that inequality and polarization feed into each other in a vicious cycle. In a post on the London School of Economics blog earlier this year, economists likewise wrote that gridlock makes it more likely Congress will maintain the status quo, and that the longer this polarization lasts, the more intractable inequality will be.

All of which is to say that polarization isn't just an obnoxious trend. A polarized, do-nothing Congress may be a sign of or cause of real economic problems, or it may be both at the same time.