Share All sharing options for: The surreal infographics ISIS is producing, translated

We know that ISIS, the al-Qaeda breakaway group that's gaining more and more ground in Iraq at the moment, is an exceptionally well-trained and disciplined fighting force, with a shockingly sophisticated social media strategy to boot. But did you know that they also produce annual reports with fancy infographics detailing all the operations they carried out over a given period? 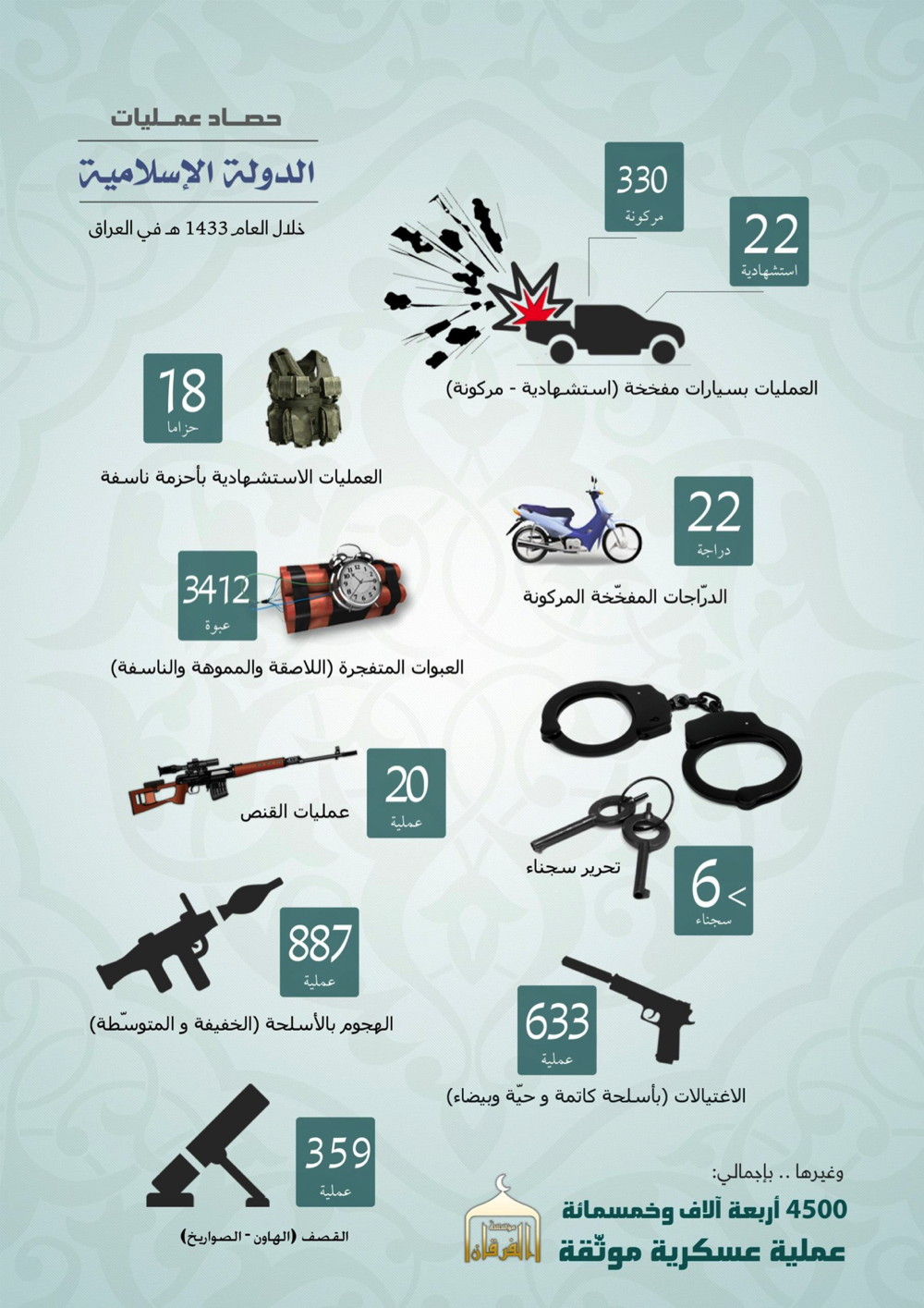 2011-2012 report. Image courtesy of Institute for the Study of War upload of ISIS report.

You can see the 2012-2013 one here. But those are fairly impenetrable to non-Arabic speakers. So, with the help of Vox's awesome design team and some outside translators, we created versions with English descriptions of the stats. Here's 2011-2012 again. ISIS counted 3,412 IEDs, 633 assassinations, and 330 suicide vehicle IED attacks: 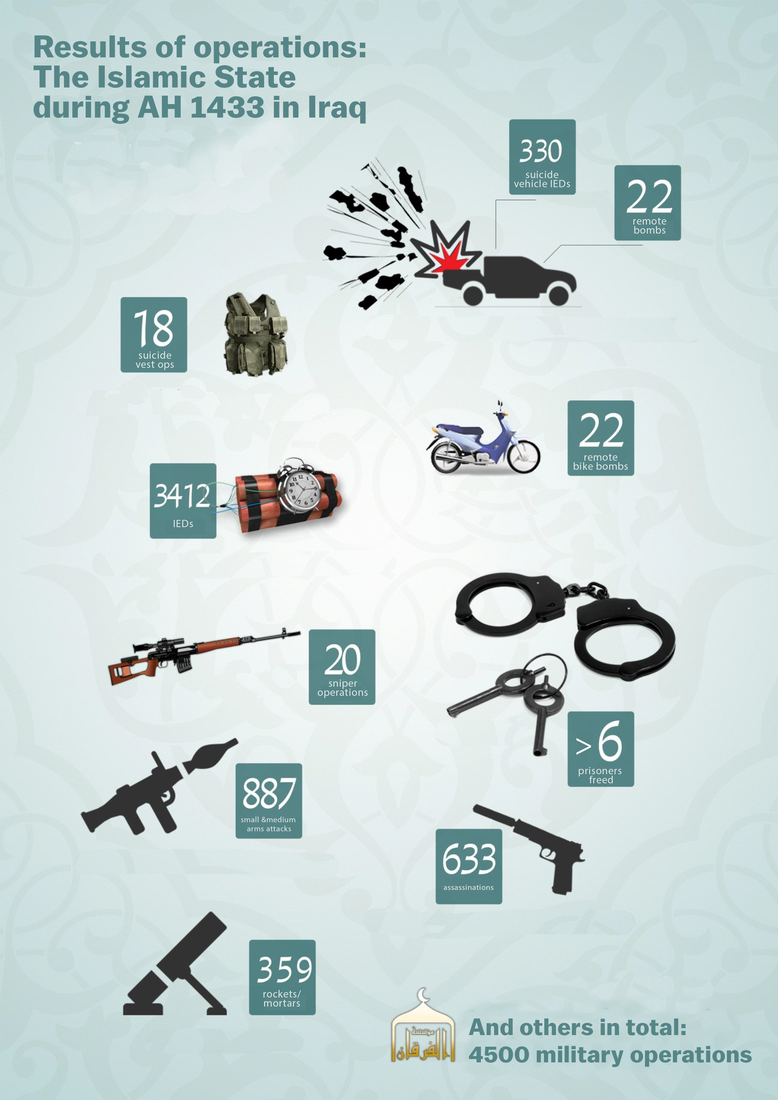 And here's 2012-2013. There were some parts we couldn't translate initially, but a group of readers, including Katie Paul, Edward Maher, Karl Lindemann, James Clements, Redouane Djeghader, and Michael Walles, helped finish it after this article was first posted, so the current version should be complete: 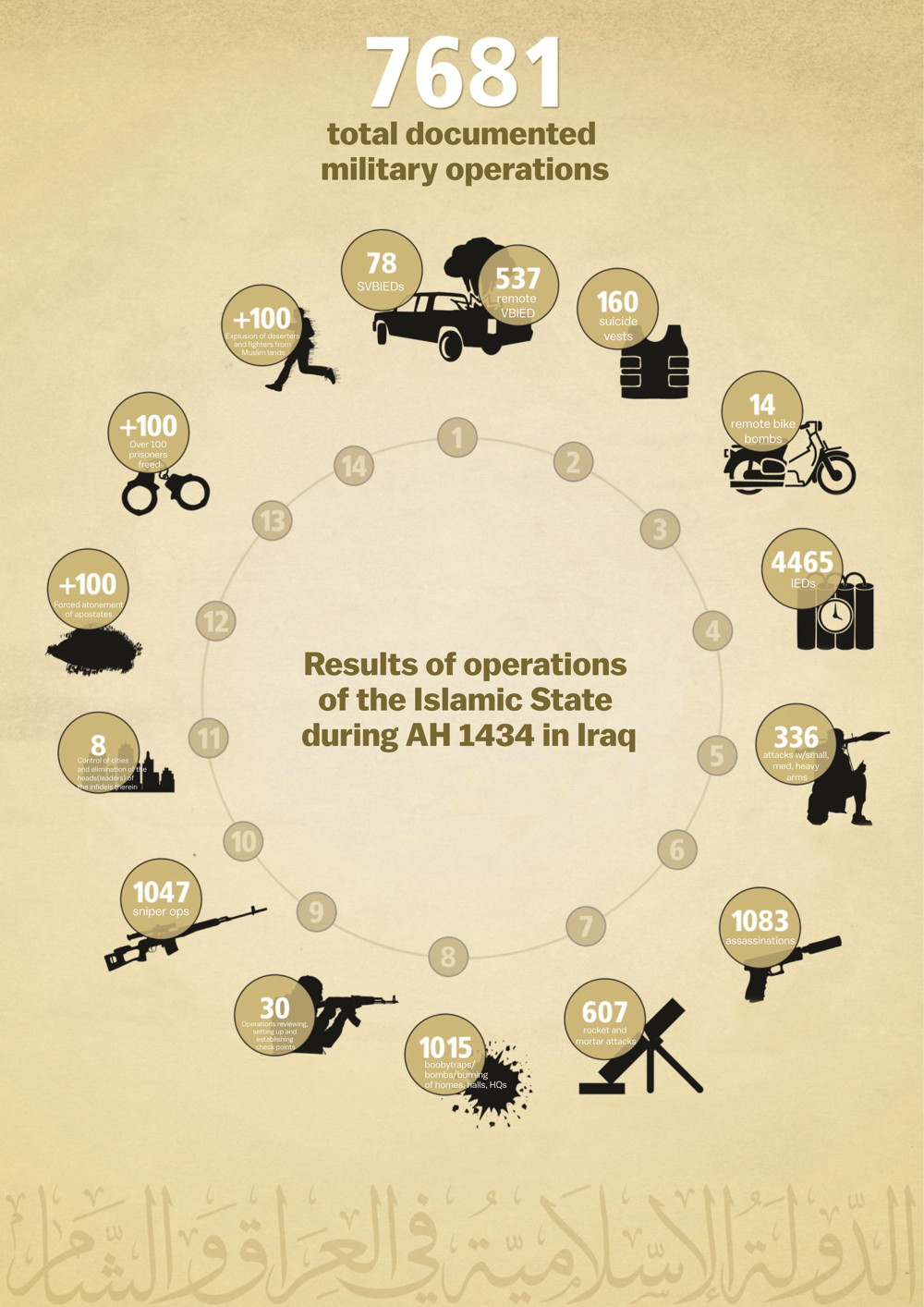 "There are many reasons why a military organization would collect and publish attack metrics," Alex Bilger of the Institute for the Study of War, who has analyzed the reports, writes. "First, metrics effectively demonstrate the use of centrally distributed resources, such as suicide bombers. Second, metrics provide a higher command with a means to compare subordinate commands and to control main efforts. Third, attack metrics provide a means to communicate organizational efficacy to outside parties, such as donors, al-Qaeda groups, and adversaries"

You can read more about what we can learn about ISIS from these reports from Bilger's report here. Thanks to Warren Schultheis and Adam Baumgartner for Photoshopping the infographics, and to Peter J. Munson, Zaid Aleman, Hicham Mahjoubi, and Amelia Wilbur Riggs for translating; Peter especially helped out in a huge way. Think you spot a translation error? Shoot me a line at dylan@vox.com.

Update: This article has been amended to add new translations to the second infographic, which was previously incompletely translated.