Share All sharing options for: Obama's legal argument for droning an American citizen without trial, explained

We finally know the legal argument the Obama administration used to justify killing American citizen and alleged al-Qaeda operative Anwar al-Awlaki in a 2011 drone strike in Yemen. The Second Circuit Court of Appeals forced the administration to release the Justice Department memo making the argument and, on Monday, the memo went public.

There's a lot to say about the contents of the memo, and a lot will be said in the next few days, particularly because the administration's justification for killing this American citizen overseas with a drone strike could hypothetically be applied to killing other Americans. But for now, here's a guide to the memo's core argument — and the crucially important section the government decided to heavily redact.

A good chunk of the memo is devoted to 18 U.S. Code § 1119. The statute says that if an American kills another American overseas, that's considered murder under US law. Anyone who does it can be tried in the same way as an American who murders someone inside US borders. Some legal scholars, most prominently, the School of Oriental and African Studies at the University of London's Kevin Jon Heller, argued before Awlaki's killing that any such operation would legally be murder because of this provision.

The administration's memo, written by Assistant Attorney General David Barron, goes at great length to argue why 1119 doesn't apply. Barron relies on something called the "public authority" justification, which allows government officials to break the law when doing so is authorized by "proper public authority" — i.e., other laws that give them legal authority to take an otherwise illegal action. Barron analogizes Awlaki's killing to a police officer speeding while in pursuit of a criminal; the police officer can break the speed limit because his job requires him to.

The argument, then, is that the CIA operatives who fired on and killed Awlaki were acting consistently with other laws. The big question, of course, then becomes which law could authorize killing an American overseas.

To justify the Awlaki killing, Barron relies heavily on the 2001 Authorization for the Use of Military Force (AUMF), the law that Congress passed to permit striking al-Qaeda post-September 11th, and which was used to justify the US-led investigation of Afghanistan.

Awlaki, according to Barron, was a leader in al-Qaeda's Yemen-based branch, which is known as al-Qaeda in the Arabian Peninsula. The intelligence supporting this claim is redacted from the memo. But Barron claims that, because Congress authorized using "necessary and appropriate force" against al-Qaeda, the AUMF would thus give the US legal cover to target Awlaki.

"In consequence," Barron concludes, "the operation should be understood to constitute the lawful conduct of war and thus to be encompassed by the public authority justification." He also writes that the AUMF argument makes the killing justifiable under international law as a defensive use of force.

One possible counter-argument is that this is unconstitutional: the Fourth Amendment generally prohibits the killing of US citizens without due process of law. Barron argues that this case is an exception because capturing Awlaki was impossible — for reasons that are again redacted. If capturing Awlaki was "unfeasible," as Barron says, then killing him to prevent him from threatening the US becomes the only option.

This is a highly controversial argument. Arguably, it would only work if Awlaki posed an "imminent" threat, and we have no idea if he did, and if it were truly not feasible for the US to arrest him instead of killing him. A good rundown of the debate over the AUMF and Awlaki, by Just Security's Ryan Goodman, can be found here.

An awful lot of administration's case is redacted

In addition to the intelligence allegedly proving that Awlaki was an al-Qaeda leader and that arresting him would be impossible, there's one other key point that's redacted. While most of the portion explaining the "public authority justification" for the military targeting Awlaki is made public, the portion covering the CIA taking the same action is heavily redacted. All the white space on this page is redacted text: 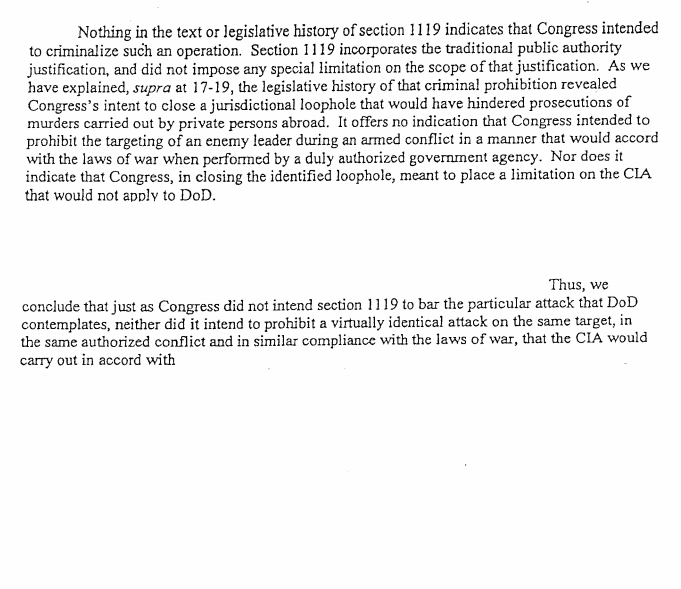 So it's very hard to figure out what their argument is.

With large chunks of the document missing, it becomes very hard to fully evaluate

This matters. As Heller explains in a post responding to the memo,  "international law entitles only the members of a state's regular armed forces to participate in hostilities." Since the CIA isn't part of the US' regular armed forces, the same AUMF arguments that could justify a military strike under the public authority justification don't necessarily extend to the CIA.

With large chunks of the document missing, it becomes very hard to fully evaluate Barron's response to that argument — especially given that most of the specifics of the Awlaki case are redacted as well.

So while the Awlaki memo may be released, we're still in the dark about a lot of the administration's legal thinking in several important ways. Ones that could, theoretically, determine just how limited the Obama administration's claimed authority to kill Americans is.