Tobacco companies have made cigarettes deadlier than ever

Share All sharing options for: Tobacco companies have made cigarettes deadlier than ever

Over the last five decades, the tobacco industry has engineered cigarettes to be more addictive — and has also made them more dangerous.

Smokers suffer from higher risk of lung cancer and chronic obstructive pulmonary disease (COPD) today compared to 1964, when the very first Surgeon General's report on cigarettes was issued. This infographic, from The Campaign for Tobacco-Free Kids, lays out exactly how cigarettes have changed in the last 50 years. 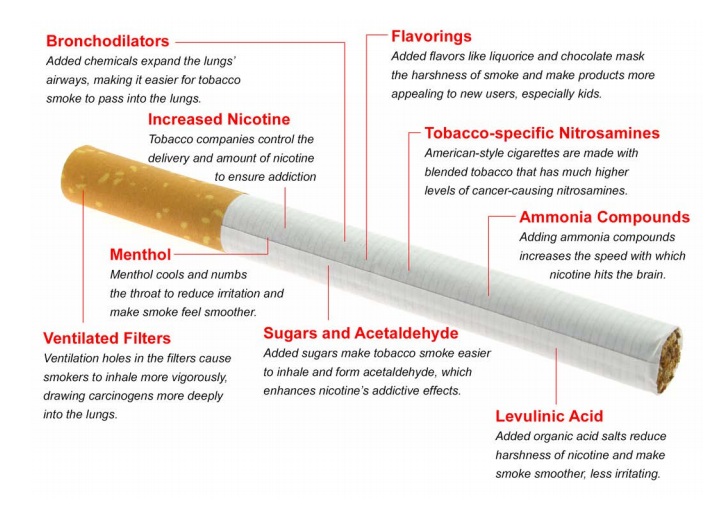 Compared to cigarettes in Australia and Canada, tobacco blends used in U.S. cigarettes have higher levels of tobacco-specific nitrosamines (TSNAs), chemicals known to cause cancer. TSNA levels have increased since 1964.

The ill effects of these design changes are compacted by efforts to make cigarettes more attractive and more addictive.

Tobacco companies have introduced flavorings to make the taste of cigarettes more appealing, while also introducing chemicals that reduce discomfort and irritation in the lungs. Higher levels of nicotine, ammonia, and sugars have increased the addictiveness of cigarettes over time.

The smoking rate in the United States has hit an historic low — but tobacco use remains the greatest source of preventable death in the United States. According to the Surgeon General, smoking kills 480,000 Americans each year. It's estimated that half of today's smokers will die prematurely, losing, on average, ten years of life. It takes a toll on the nation's economy, too: $289 billion is spent on health care and other financial losses associated with cigarettes annually.

The Tobacco Free Kids report calls for more aggressive oversight of the tobacco industry by the Food and Drug Administration. This is somewhat new terrain for the FDA; the agency wasn't able to regulate tobacco much until 2009, when Congress enacted the Tobacco Control Act. Early efforts to stretch this regulatory muscle haven't always been successful — the FDA wasn't able to require cigarette manufacturers to totally overhaul their labeling to make health hazards more obvious, for example.