60 years of presidential fitness campaigns, and obesity is worse than ever

Share All sharing options for: 60 years of presidential fitness campaigns, and obesity is worse than ever

The next time you see Apple's ubiquitous ad touting the new fitness-tracking features for the iPhone, pay attention to the song in the background:

The song is "Chicken Fat," which was introduced by the Kennedy Administration in 1961 as part of one of the first major presidential efforts to change Americans' health. The White House under the Obama Administration is a huge promoter of physical fitness, but they are hardly the first administration to make that a priority. The history of presidential fitness campaigns begins 60 years ago, with the release of a hugely influential report on American health. 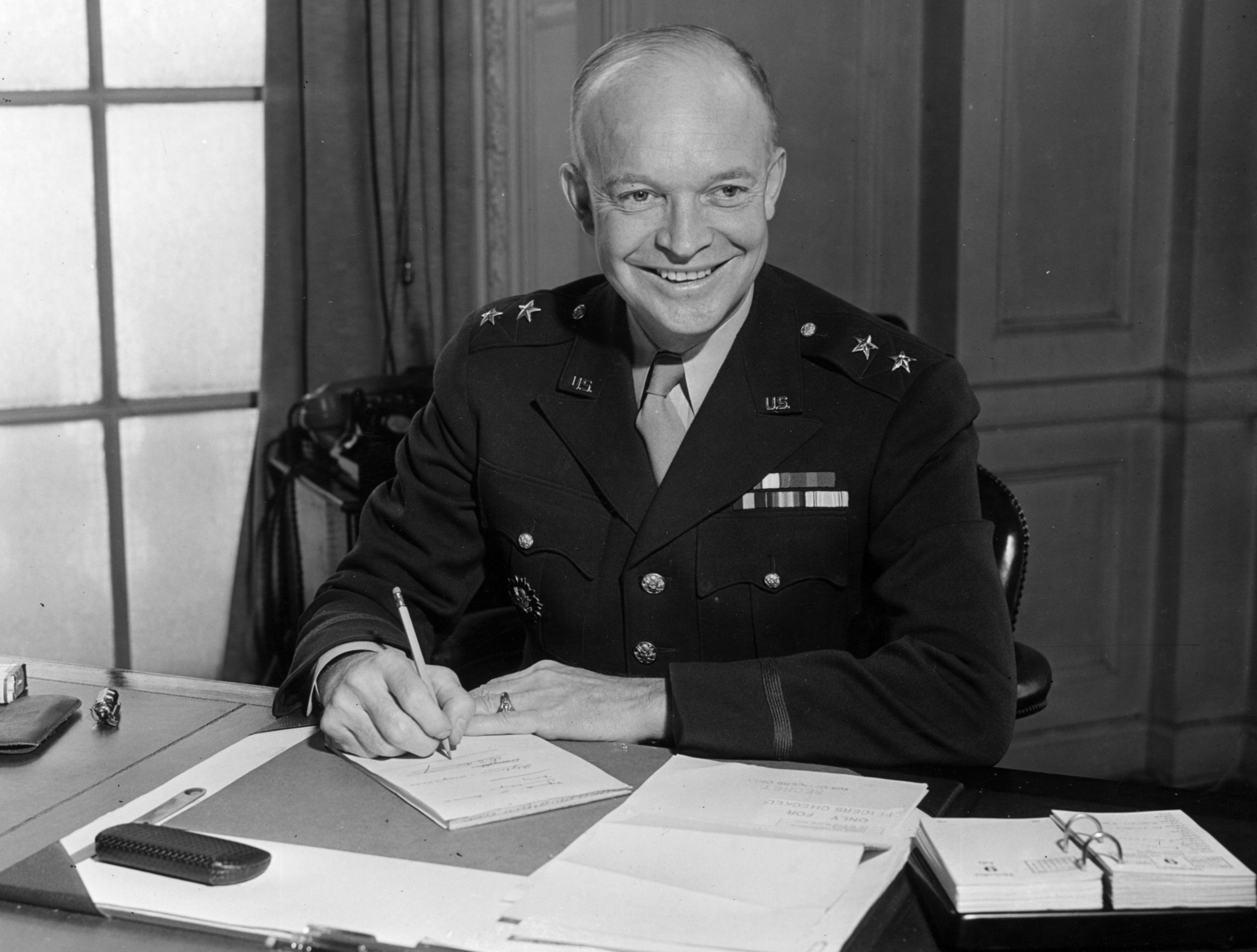 The first study to get policymaker attention about the state of American's physical fitness was published in December of 1953. American youths, Dr. Hans Kraus reported, were out of shape, and lagging behind other countries in physical fitness. This topic was not a new one; Dr. Kraus had published a similar study with almost identical findings a decade before. But this one landed in the right hands.

The report claimed that 56% of American children failed the fitness test, but only 8% of Europeans did. This was 1953: the Cold War was beginning, and Americans were highly attuned to suggestions the US was falling behind in some area. Kraus's study was passed up the ranks—from Olympic gold member rower (and father of Grace) John Kelly to Pennsylvania Senator James Duff, and from Duff to President Eisenhower. It was written about in Sports Illustrated, Newsweek, and US News and World Report. 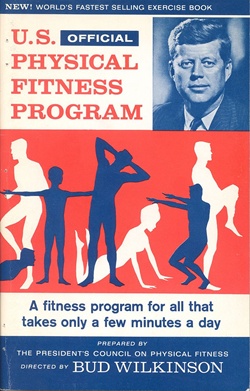 Though President Eisenhower made Americans more aware of physical fitness, John F. Kennedy made physical fitness a bigger part of his campaign and his administration. He wrote an article for Sports Illustrated titled "The Soft American" where he wrote that the physical fitness of americans was a "national problem which should be of deep concern to all of us because... technology and automation have eliminated many of those physical exertions which were once a normal part of the working day."

Only one month into the Kennedy administration, the council was reorganized and instructed to initiate pilot fitness projects. The administration challenged Americans to a 50 mile hike, and followed it up with a media blitz, sending 650 TV kits and 3,500 radio kits to broadcasters alone. It was during this promotional campaign that "Chicken Fat" emerged:

Once more on the rise.

Nuts to the flabby guys!

Go, you chicken fat, go away!

The song was produced and written by Meredith Willson, who is perhaps best remembered for writing the book (with Franklin Lacey), lyrics, and music for The Music Man. The song was recorded in a three minute version for radio, and a six minute version to be played in gyms around the country. Though the council did not have the ability to impose the program nationwide, it distributed 200,000 copies of the song at no cost for the 1961-62 school year.

The results were encouraging. "After only six weeks," Kennedy wrote, "25% of the students who had [previously] failed the basic fitness test passed." By the end of the school year, 80 precent of previously failing students passed. Even Superman came out to support President Kennedy.

It wasn't all sunshine for the president's new fitness campaign, though. The Council on Physical Fitness and Sports was a political entity as much as an educational one. In Detroit, officials banned the song, judging the lyrics to be in bad taste for children, and the idea of exercising to a recording as being poor physical education practice.

A school does push-ups in 1965. Image by Duane Howell

After Kennedy's assassination in 1963, President Lyndon B. Johnson conducted a second national fitness survey, and based on those survey results created the first Presidential Fitness Award. Today the award is given to students who score above the 85th percentile on the President's Challenge. The program continued to expand under the Nixon administration. President Nixon's adjustments to the program established three main goals: daily moderate physical exercise, strength training and strenuous physical activity, and the creation of sportsmanlike conduct.

After minimal involvement from presidents Ford and Carter, the program received increased attention from Ronald Reagan. Under Reagan, the executive order creating the council was amended to revamp the program. The White House held a Symposium on Physical Fitness and Sports Medicine and proclaimed May National Physical Fitness and Sports Month. The changes to the original Executive Order allowed Reagan to establish the National Fitness Foundation, a National Fitness Testing Week, and the U.S. Fitness Academy (the academy was never built). 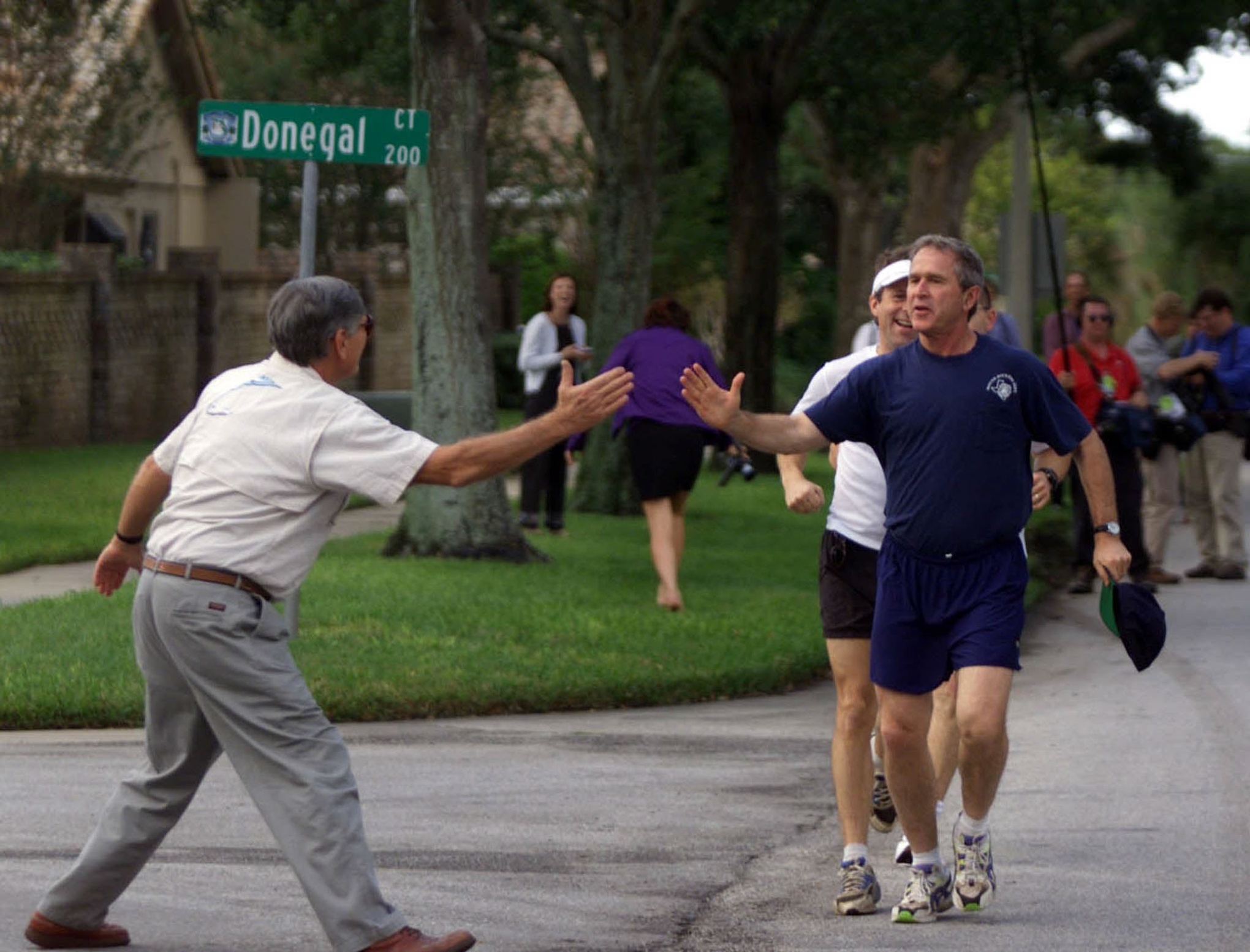 Despite Reagan's initiatives, however, the Council got the most media attention under the first Bush administration when George H. Bush appointed Arnold Schwarzenegger as Chairman. Bill Clinton released a couple of fitness guides, and set up the plans to develop and launch a website for the council. That site, fitness.gov, came to fruition under the administration of George W. Bush. Under President Bush, the Council celebrated its 50th anniversary and launched a national fitness test for adults. 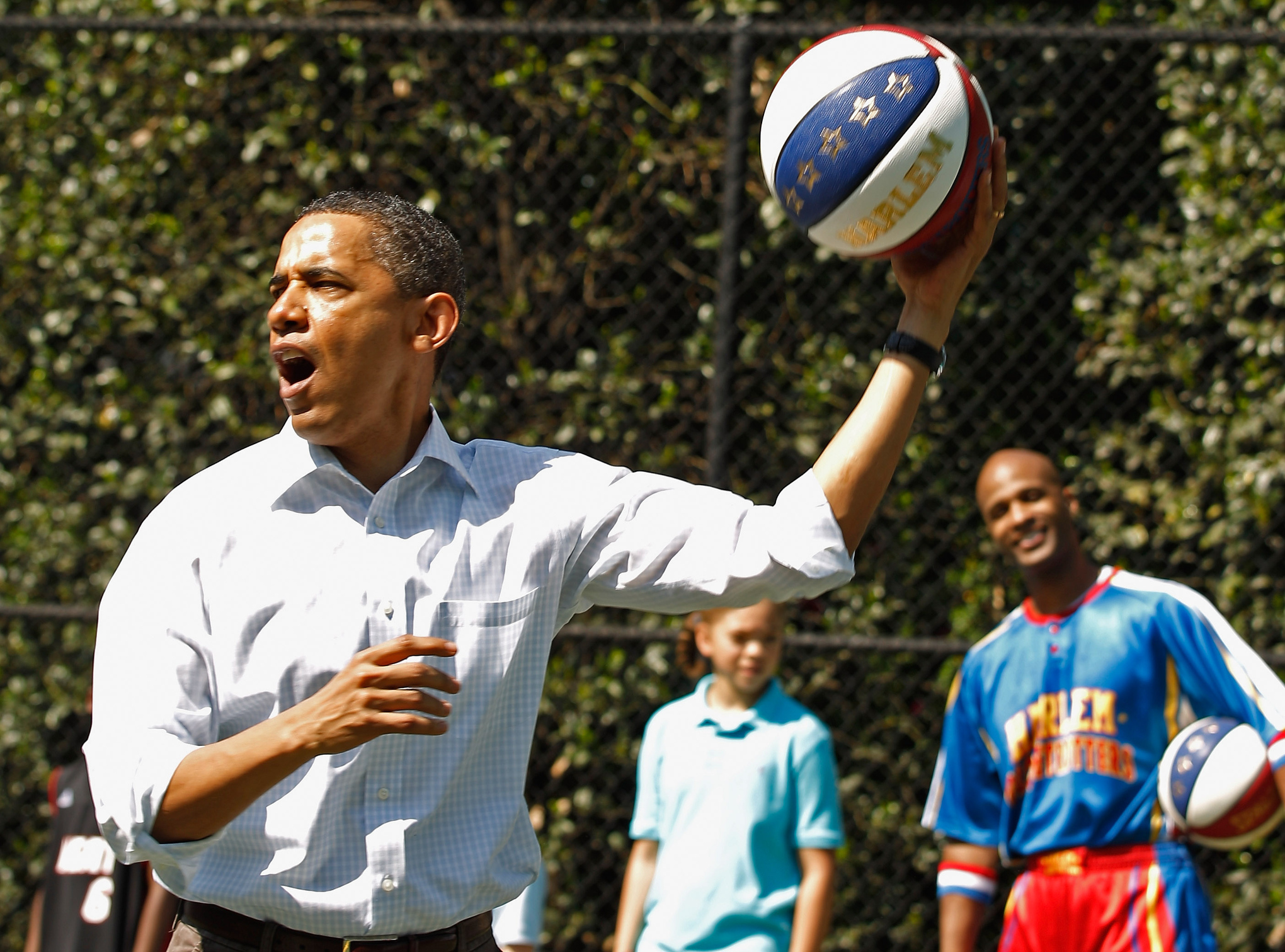 Under the Obama Administration, the name of the Council was changed to become the President's Council on Fitness, Sports and Nutrition. The expansion of the council to include nutrition also involved the addition of five new members. First Lady Michelle Obama has been the principal administration member working on fitness initiatives. She created the Joining Forces Fitness Initiative to give free fitness benefits to National Guard Members, and, most notably, began the Let's Move! Initiative.

The Let's Move! initiative is dedicated to solving the problem of childhood obesity in the United States; more than one third of children are overweight and 17% are obese. The program focuses on both improving nutrition for children and increasing physical activity. The federal school lunch program was overhauled for the first time in 15 years to include healthier more nutritious meals, and President Obama passed legislation that required national restaurant chains to post their calorie counts on menus.

The program's been good PR for the administration so far. Michelle Obama has visited schools to promote Let's Move! and even once did the "Dougie" with some middle schoolers:

But its results are so far lackluster. As of January—three years after the initiative began—only one out of four teens was meeting the administration's fitness guidelines.

It's not just Obama who's falling short, of course. Fitness has been a point of policy for the last eleven presidents, and yet in that time, the American obesity rate has skyrocketed:

Graph courtesy of the CDC

The long-term effect of presidential fitness programs is difficult to see because the council does not set any concrete long term goals. Even the council itself admits that they "cannot actually make anyone active," and that their goal is to provide "information and incentives to get people interested in living a healthy lifestyle." Without exact goals for progress, the only way to judge whether or not these programs are working is by the general fitness and health of Americans. Americans are less fit than they were when the Kennedy administration expanded the fitness program. The children who shocked President Reagan and exercised to Kennedy's "Chicken Fat" song, are now among the two thirds of overweight adults.

That's not to say that efforts to improve fitness are futile, of course. A review of studies by the CDC's  Emily Khan and coauthors found that some aspects of major fitness campaigns, like community-based fitness programs and school-based physical education, can be very effective. Another review by Esther van Slujis found that school based interventions could increase physical activity in adolescents. But ultimately, neither study had sufficient data to measure the effectiveness of widespread media campaigns like Let's Move.

It's too early to say what kind of impact the Let's Move! Initiative might have, and there's some reason to believe that insofar as it improved school-based physical education, it is making some kind of impact. But however big the effect, it's not enough to beat back the obesity trend it's fighting.