Studies have found that many straight men prefer women with an hourglass figure, with the woman's waist being about 70 percent as wide as her hips. Indeed, this fact is often cited as an example of evolutionary psychology — the idea that evolution has shaped our minds as well as our bodies.

A new study shows that the situation is fairly complicated. It confirms 0.7 as the average preferred waist-to-hip ratio, but it also shows that individual preferences vary a lot. The study was small, but carefully designed, and adds one more piece of evidence to the continuing saga about waist-to-hip ratios.

The claim: men have an evolutionary preference of women with a waist-to-hip ratio of 0.7

You might think that male preferences is simply a function of cultural norms. However, there is some evidence that women with a classic hourglass figure (or specifically waist measurement that's 70 percent of their hip measurement) tend to have higher fertility and better health. And according to one study, they and their children are more intelligent.

There are a variety of possible reasons for this. For example, the ratio is related to a woman's levels of estrogen and testosterone, which could be influenced by both cultural and biological factors.

women with this ratio are healthier and more fertile

If women with this ratio are healthier and more fertile than other women, then men who prefer them would be better at producing offspring. And over time, this preference could become widespread among men.

A male preference for a 0.7 waist-to-hip ratio has been observed in many industrial and traditional societies, although not in every single one studied.

And some studies have shown that the effect is stable throughout time, but others haven't. For example, one study found that although Playboy playmates got thinner between the 1950s and the 1990s, their waist-to-hip ratio has stayed about the same. But other papers say that the ratio has changed.

In one particularly intriguing study, the preference was found in Dutch men who had been blind from birth and presumably hadn't been inundated with our visual cultural imagery of the ideal female figure. There's an interesting review of that study and of conflicting cultural data from the New York Times Magazine here.

Many waist-to-hip ratio studies haven't been of the highest quality, as author Krzysztof Koscinski of Adam Mickiewicz University in Poland, points out in a new paper. Many failed to account for changes in body mass, used unrealistic-looking images, or didn't offer a wide enough variety of options for people to choose from.

So he set out to do a really good study. It was small, with only 40 participants, but carefully designed. He created six different series of 24 computer generated images each where the waist-to-hip ratio changed, but the overall body mass stayed the same. It looked similar to this:

When men were asked about their preferences, the answers tended to average out to around 0.7. Not a big surprise.

But perhaps more interesting is that individual men really varied in what they preferred. I (unscientifically) lumped the responses across the paper's six experiments below, for easy chart-reading: 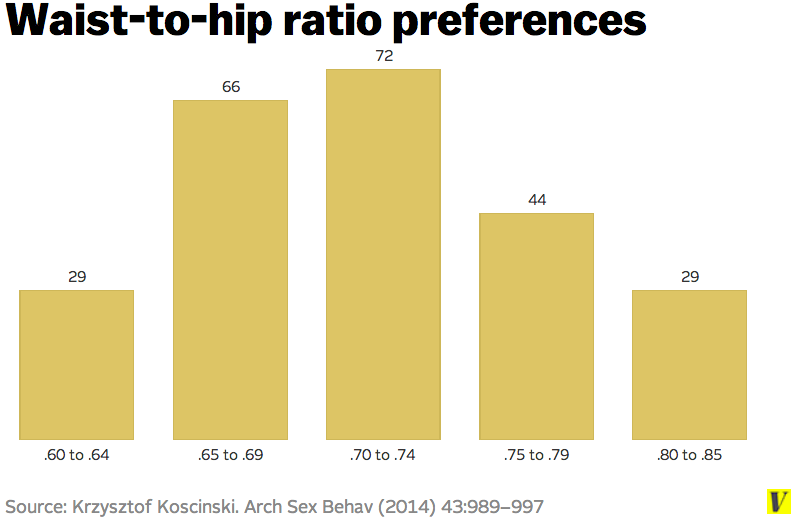 This is a great lesson about how averages can obscure interesting trends. The ratio of 0.7 might be what the average man prefers, but there's plenty of variation among individual men.

I probably obscured some trends by lumping those six studies together, too, so here's the six studies separated: 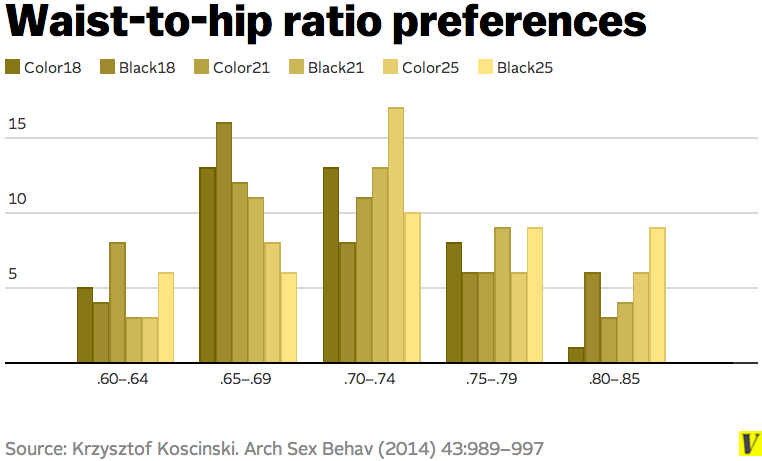 The numbers are women's body mass index (higher numbers are heavier people) and "black" vs. "color" indicate different ways the women were visually represented. "Color" is like the figures earlier in the story, and "black" is a black silhouette.

Are there reasons to not believe the results?

it's impossible to fully separate humans from their culture

Well, this is only one study, and it's a study of 40 men in Poland. That's not so many people. And it's possible that what Polish men like won't generalize to the rest of the world.

It would be interesting to see what men in other cultures think if presented with these same images. (And even what women and gay men think).

Also, it's impossible to fully separate humans from their culture. There's always the possibility that the cultural support and approval of women who look a certain way is what leads to these women having better health (including better fertility).

People can stack up cross-cultural data and evolutionary benefits all they want, but until scientists can take thousands of people and raise them in a laboratory with different cultural beauty standards, we'll never really know for sure.

Update: Added more information on the link between body shapes and intelligence, the disagreements over whether centerfold models' waist-to-hip ratio has changed over time, and more musing on how culture can affect health and the body.