Share All sharing options for: Is soccer finally becoming a mainstream TV sport in America? These charts say yes

If it seems that more people around you are talking about and watching the World Cup than ever before, it's not your imagination.

Is soccer finally becoming a mainstream TV sport in America? Here's a deeper dig into the numbers.

World Cup viewership is comparable to other sports' championships

When you add in Univision, a total of 15.9 million Americans watched the US-Ghana match on TV — a total that nears the previous most-watched men's soccer match (a 2010 US-England match that drew 17.1 million), which had the major advantages of being aired on ABC and played on a Saturday.

It's especially interesting to compare that figure to the ratings of a few key sporting events from last week: the final games of this year's NBA finals and Stanley Cup finals. 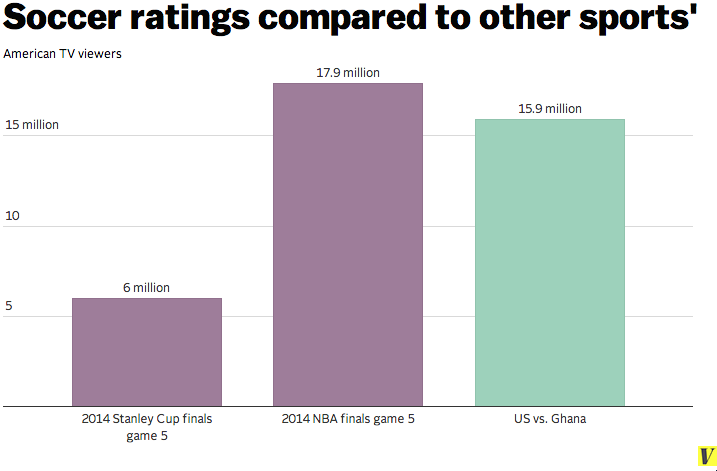 Obviously, other years' Stanley Cups and NBA Finals might have more drama — and get more viewers — but it's still an extremely interesting comparison, especially given that this was the first US match of the World Cup, not a final.

The US matches are getting more and more viewers

This is part of a general upward trend. There's some variation from match to match, but on the whole, more Americans are tuning in to watch their team's matches each year: 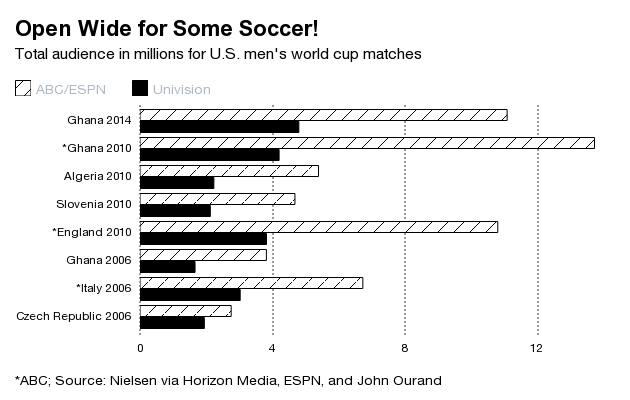 But interestingly, all matches — not just those involving the US — are getting more viewers.

ESPN's broadcasts as a whole are averaging 4.112 million viewers, an increase of 23 percent from 2010. The network says that of the first seven non-US games it aired, four got more viewers than any of the 212 non-US group play matches it's aired since 1994.

Viewership is much higher in some areas than others

Another interesting fact is that these ratings increases aren't geographically uniform. DC led the country in ratings for the US-Ghana match by a wide margin — which mirrors the general trend of DC having the highest viewership for all World Cup matches so far. 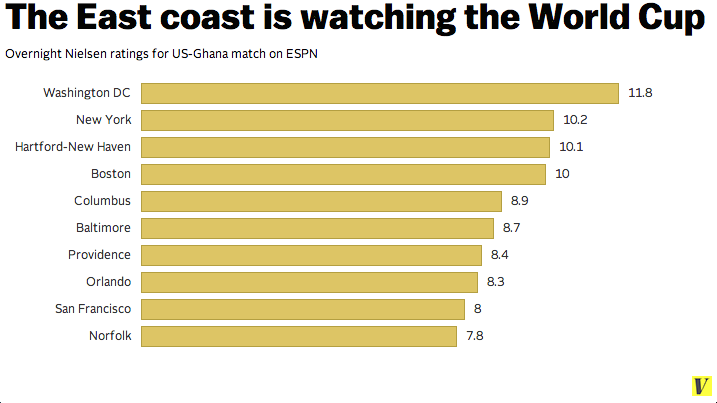 There are a few reasons for this. One might be the city's large international population, with many people coming from soccer-loving cities. Another is that watching soccer seems to be most popular on the East coast in general: seven of the top ten cities are on the East coast. Part of this is probably because the game aired at 6 p.m. Eastern time, versus 3 p.m. on the West coast.

The lowest ratings, meanwhile, have come in the Sunbelt: 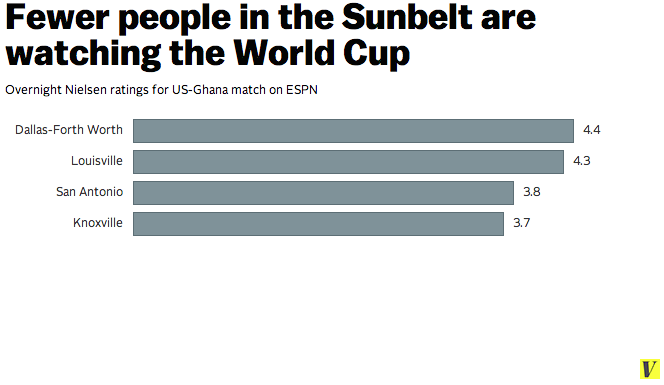 One thing to note, though, is that these are only ESPN's ratings — so in cities like San Antonio, where there's a substantial Spanish-speaking population, adding in Univision's viewership might make a big difference.