Share All sharing options for: 5 reasons US workers hate their jobs more than they used to

A new report on job satisfaction shows that we're slowly becoming happier with our jobs since the recession. That's great, but over the long term, US workers' satisfaction is way below where it used to be, and the Great Recession isn't to blame. Back in the 80s and 90s, Americans were pretty happy with their jobs, according to a new report from the Conference Board. Then, somewhere in there, something happened. 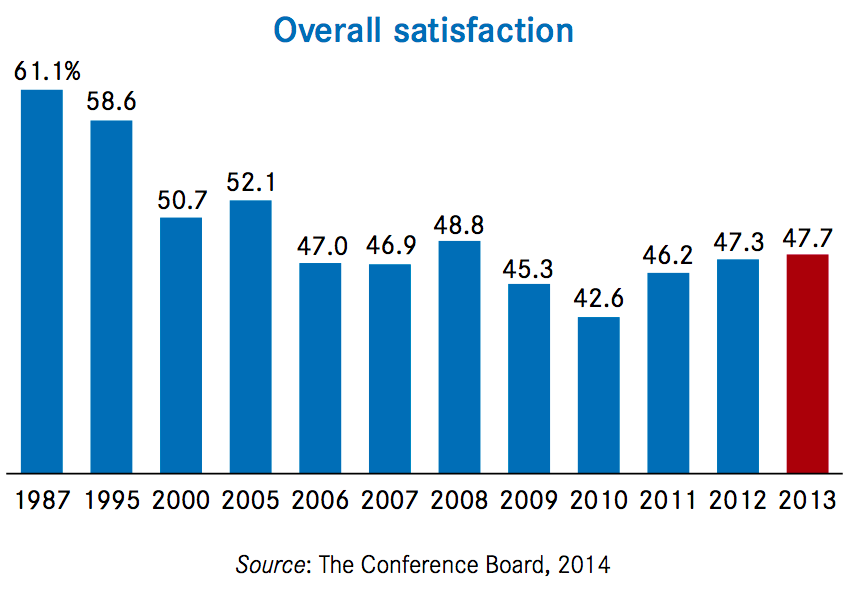 A survey of 5,000 households shows that the economic downturn wasn't the only thing that made the American worker disenchanted. As early as 2000 our job satisfaction had come way down, and by 2006, still well before the crisis, only around 47 percent of us were satisfied with our jobs. What happened? More data in the report shed some light on this.

1) We have less job security 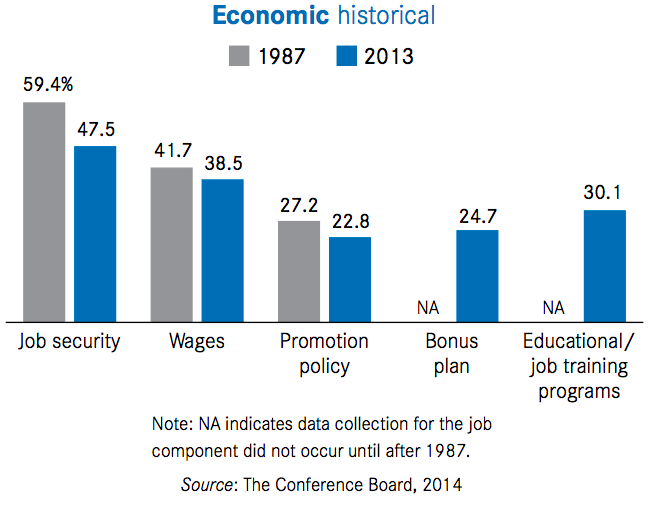 Americans' satisfaction across many economic factors has fallen, but the sharpest fall seems to be in job security. Nearly 60 percent of people were satisfied in their job security in 1987. Today, it's less than 48 percent.

That decline in job security may be part of a chicken-and-egg scenario in which director of macroeconomic research at the Conference Board.

"It relates to the commitment and the relationship between employers and employees is deteriorating over time. It used to be people were much more loyal to their employers and vice versa," he says. Workers feel less secure at work, he adds, but employers may also feel less security about their workers, as they fear that workers they invest time and money into will change jobs more often. 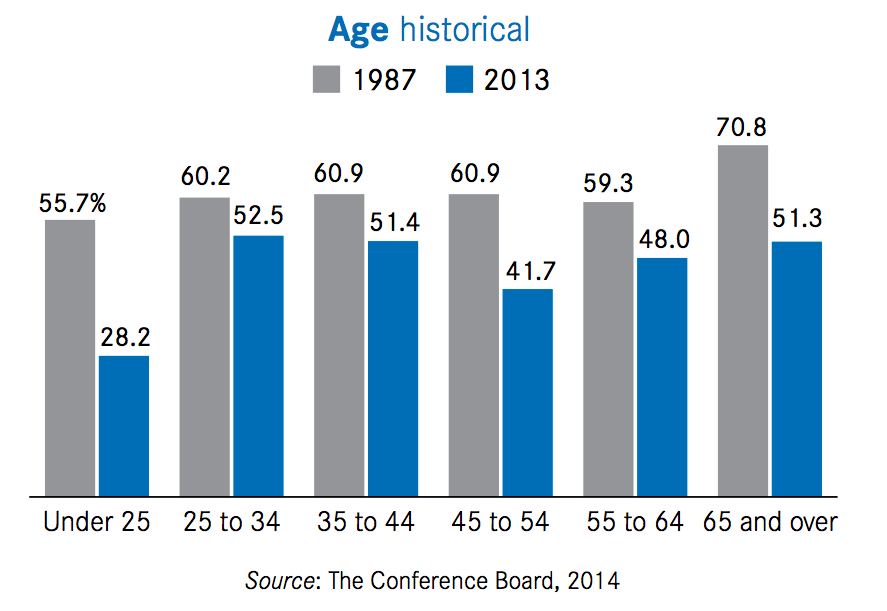 People of all ages are less satisfied than they were in the 1990s and 1980s, but the dropoff has been sharpest for the youngest workers. Those workers are only around half as satisfied as young workers were in 1987, as the Post's Catherine Rampell points out in a post this week. Just over one-quarter of workers under 25 say they are satisfied, compared to around 56 percent in 1987.

Young workers do have a tough job market right now, but then, young workers always have a higher unemployment rate than older workers. One thing that might play into this is underemployment — as of 2012, 44 percent of young college graduates were either working fewer hours or overqualified for their jobs. 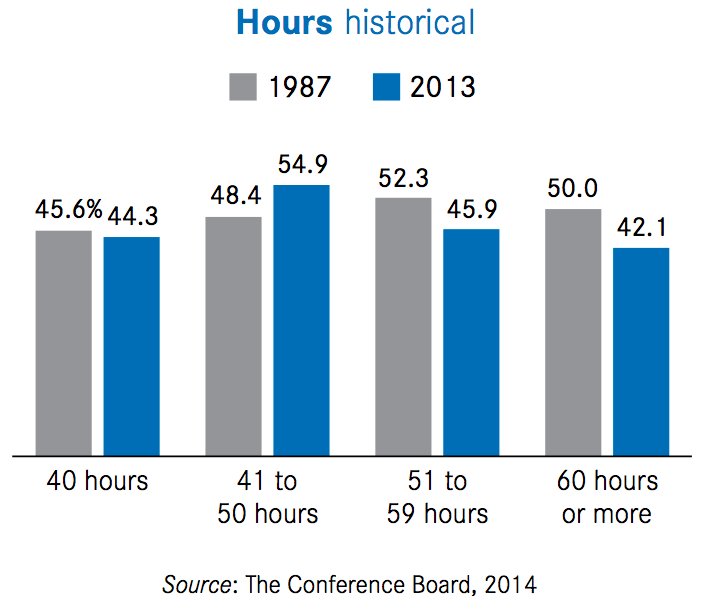 The share of people who are satisfied with working 40 hours a week has more or less held steady, and the share satisfied with 41 to 50 hours is the only group that has jumped. But among people working more, and particularly 60 hours or more, satisfaction has really fallen off.

According to the report, these shifts "may indicate a change in attitude about time spent working, where workers are less satisfied than they once were with putting in more time at work." And that could also mean managers should take note — if workers hit a point of "diminishing satisfaction" in that 41-50 hour range, it could mean lower productivity. That means having people longer hours may not be a great idea. This data also may not reflect the off-hours "work" we do in checking our email at home and on vacation. Keeping up on that may make more hours at the office feel even worse. 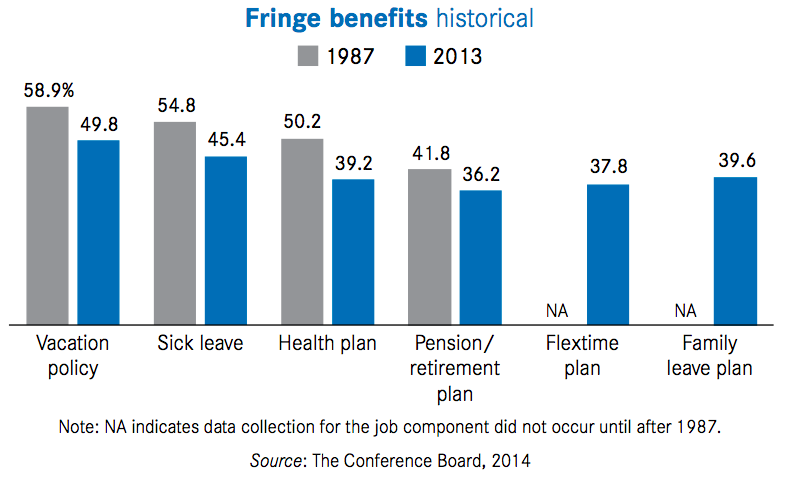 Americans are more dissatisfied about their other benefits than they were a few decades ago. A few things could be happening here. One is that employers have moved strongly away from pensions to 401(k) plans, which may have eroded satisfaction in retirement plans. In addition, he says, the share of workers in the temporary help industry has climbed, not to mention the number of contract workers. Those workers don't often have access to the good benefits of full-time workers. 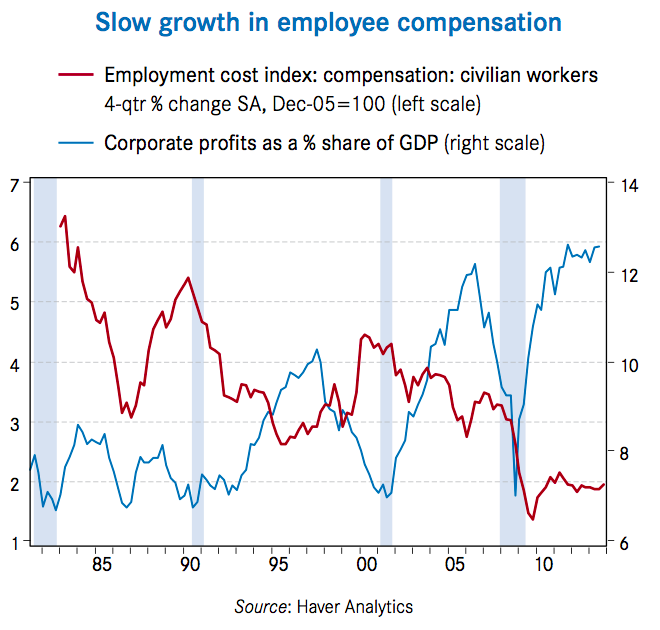 Growth in employee compensation has fallen off sharply since the 1980s and 1990s, as shown in the red line in the above chart. Yet workers are also not much less satisfied today with their wages than they were 25 years ago, according to chart No. 1. This may signal that workers are more OK with their wages than their overall compensation packages. Or it may also play into some other measures — if your pay isn't growing, you may be less excited about longer hours and feel less job security.