Map: 41 states have an active chapter of the KKK

Share All sharing options for: Map: 41 states have an active chapter of the KKK

In March, WFAA reported on a Ku Klux Klan recruiting effort in Wise County, Texas — fliers saying "The KKK wants you" were placed on residents' doors. According to the Southern Poverty Law Center, which tracks hate groups, that particular chapter of the Klan — the Loyal White Knights — recently tripled in size, to become the largest in the US.

Wise County's experience is a reminder that the KKK isn't some silly relic of the past, but still real and potentially dangerous in many places around the US. The SPLC has identified 160 chapters of various Klan orders around the country, and NewsOne put them all on this map: 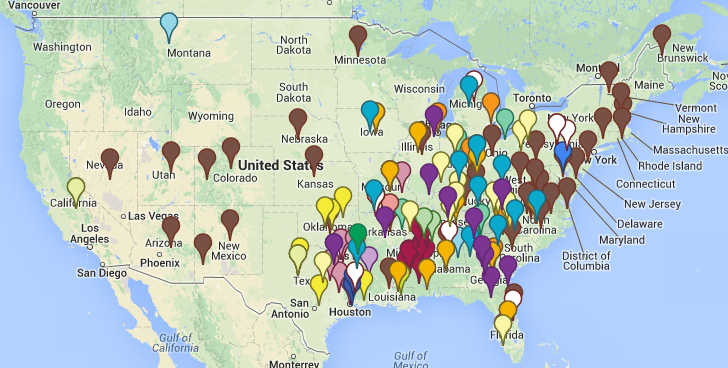 NewsOne, based on data from Southern Poverty Law Center

You can see that the Loyal White Knights, which are in brown on the map, have several chapters in the Southwest and Northeast, as well as the South. The SPLC estimates that, overall, the KKK has between 5,000 and 8,000 members today. The 9 lucky states without any active KKK chapters on the SPLC's list are Alaska, Hawaii, Idaho, North Dakota, Oregon, South Dakota, Washington, Wisconsin, and Wyoming.

Head over to NewsOne for the full interactive version of the map, and to the SPLC's site for for the original list of Klan chapters.