Share All sharing options for: Americans now think TV and newspapers are as bad as "internet news"

Americans now appear to trust internet news about as much as newspapers and television news, according to a new poll from Gallup. 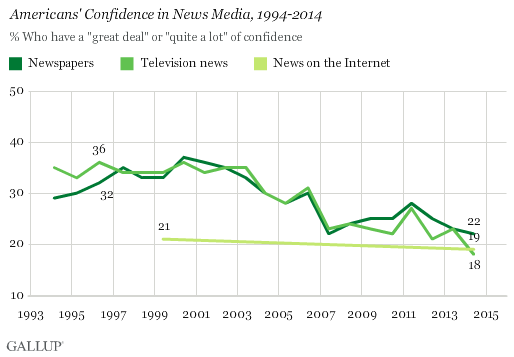 Gallup asked Americans whether they have a great deal or quite a lot of confidence in news media. About 22 percent said they do for newspapers, 19 percent for the internet, and 18 percent for TV.

That might suggest that Americans prefer newspapers to internet news and internet news to TV news, but the three numbers are actually within the 4 percent margin of error. In other words, Americans, on a statistical basis, trust all three types of news media about the same.

It's interesting, however, that TV news appears to have dipped below internet news before factoring in the margin of error. If that isn't just statistical noise, it could signify a major shift in how Americans consume their news.

Democrats have precedent for a speedy Supreme Court confirmation