College grads wait until marriage for kids. Nobody else does.

Share All sharing options for: College grads wait until marriage for kids. Nobody else does.

Waiting to have kids until after marriage is becoming an upper-class luxury.

That's the finding from a new paper published by Andrew Cherlin, a sociologist at Johns Hopkins University who studies how American families are changing. His research, presented last month at the Population Association of America, shows that a college education has become a "sharp line" in decisions about childbearing. Most Millennial moms without college degrees have children out of wedlock — while most college grads wait for kids until after their married.

Cherlin argues that the big difference between these two groups is what they see as an attainable future: college graduates expect they'll get married and have children afterwards, while non-graduates don't necessarily see that stable relationship in their future — and don't want that to stand in the way of becoming a parent.

Cherlin and I spoke Thursday about how this trend developed, what it has to do with the economy, and what it means for kids. What follows is a transcript of our discussion, lightly edited for clarity and length.

Sarah Kliff: Your new research shows a lot of interesting trends in when people are having children, and how that relates to their level of education. What is the main takeaway from the study?

Andrew Cherlin: We're seeing the emergence two very different paths to adulthood. Among young adults without college educations, most of their childbearing is in their twenties and the majority of it is outside of marriage. That includes people who have gotten a two-year, associate's degree. 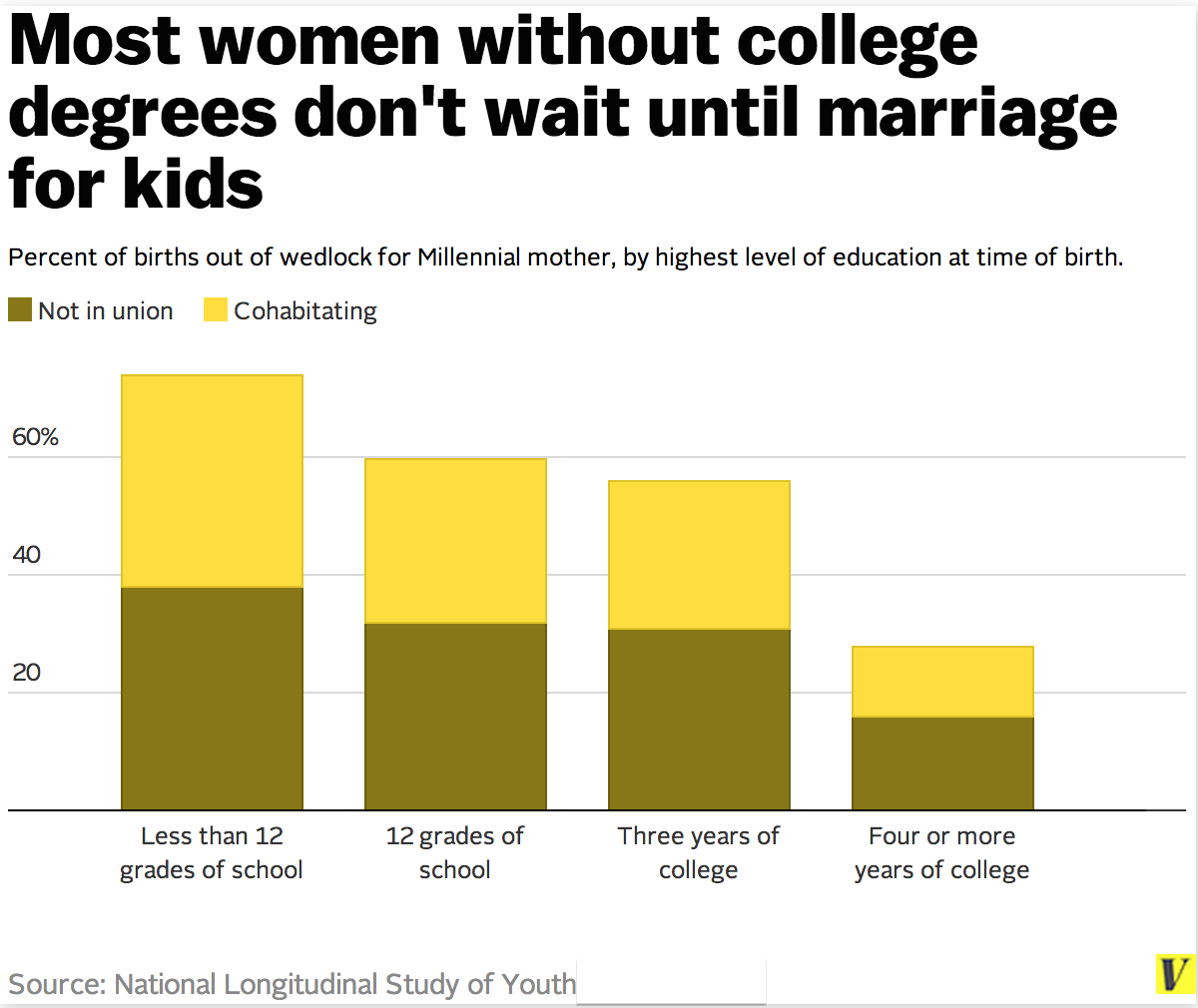 The dividing line is the four-year degree. The vast majority of people with that college degree are having children in marriage. 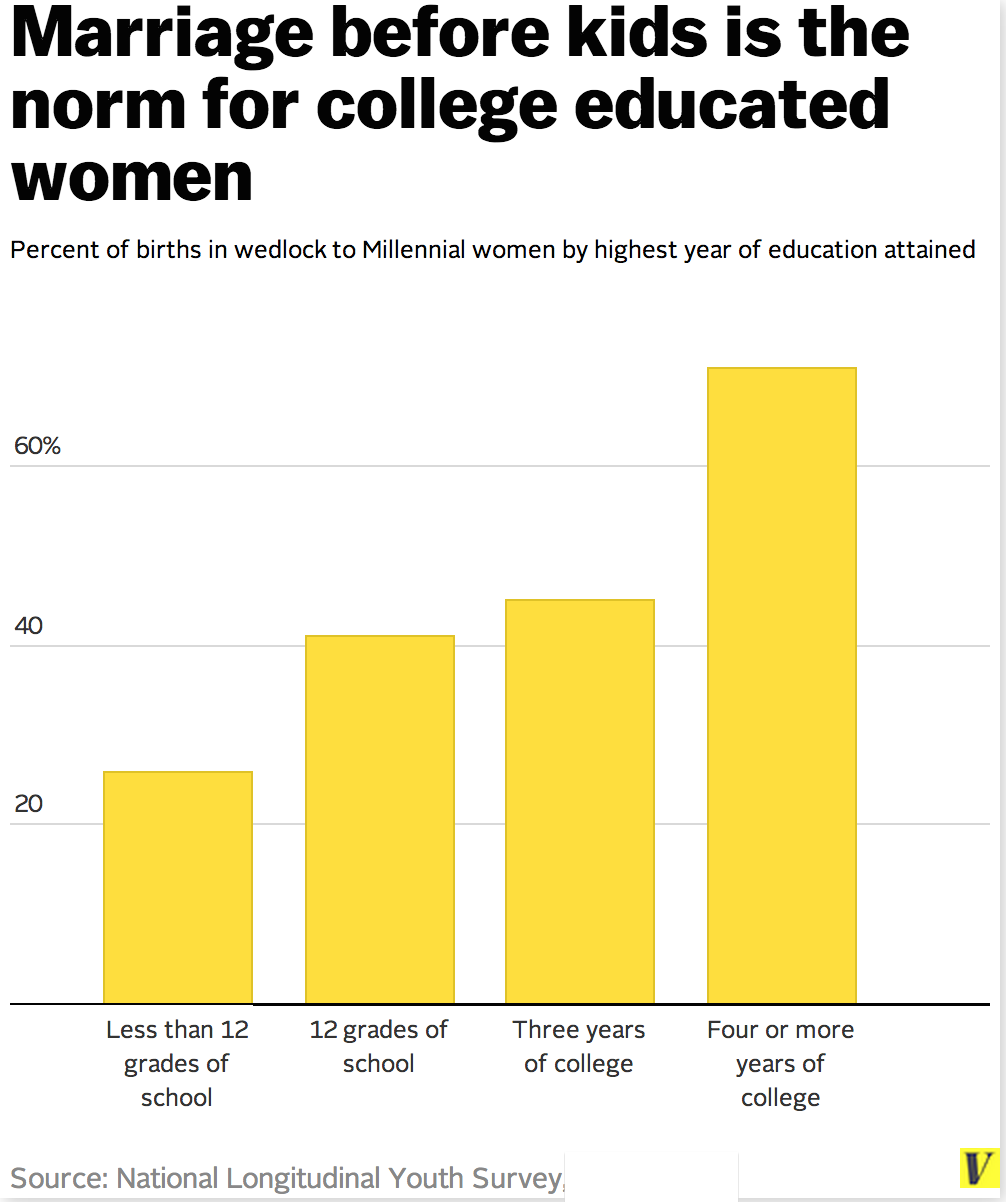 SK: What changed that led to this divergence?

AC: The biggest changes that occurred were for young adults with a modest education, who have a high school degree. Their marriage and childbearing patterns used to look more like the college-educated middle class. But increasingly, they're looking like the less-educated poor and near poor. The change occurred because the middle of the job market has weakened, and high school graduates can no longer find good jobs.

People in this group look around, and they can't see a lot of good models of marriages that are working. For some women, the young men don't look like marriage material because they can't earn a steady income. One of my favorite quotes comes from a study that a group of sociologists were doing in Toledo. They got together a group of young people who were cohabiting and asked them why they weren't marrying. And there was one guy there who essentially said, "The love is there, the trust is there, and everything is there except the money."

Young couples who aren't economically secure are like airplanes circling the airport, but unable to land.

SK: If couples don't feel economically secure enough to get married, why are they having kids? That seems like a much more expensive proposition.

AC: Having children is a really deep-seated desire. So you have many young people who are not willing to risk a childless life because they can't find a marriage partner. Having a child is something they could do this year, and something that seems deeply rewarding. They'd prefer to do it in marriage, but they aren't necessarily going to let not being married stop them.

SK: This might be me as a college-educated person speaking, but I hear that and I think that having kids seems so much harder than getting married, and arguably an even bigger commitment to make.

AC: There's a colleague of mine, Kathryn Edin, who wrote a book called Promises I Can Keep, where she interviewed 150 low-income women about this issue. And what they said to her was, "I can't see marriage coming up anytime soon and I'm not willing to put off having children. Having a kid is something I can do now." They're confident they can raise the child. They see models among their friends and neighbors getting support and managing to raise a child. It's almost as if marriage is optional, but having children is mandatory.

This is different from how you and I might see things as a college-educated people. We saw a path to the future where after you finish education, you could find a decent partner who had a stable income. You could envision a comfortable future. If you look around at the people you know, you say, "Well, I'll postpone having kids until that point." For people who don't see that future, it's too big a risk and it delays one of the most meaningful parts of our lives.

SK: What are the consequences of having more births of out wedlock?

AC: I'm concerned about stable family lives for children. I think that children need stability, and the pattern we see with cohabiting unions is that they break up at a higher rate than marriages; they lead to further unstable unions, and that creates a great deal of instability. If you look at women who are cohabiting, 40 percent didn't start cohabiting until after they became pregnant. The pattern we see is a lot of churning of parents and partners.

The children of college-educated parents tend to see less churn. The divorce rate has gone down substantially for college-educated people. That's because they're the ones who can pool together two good incomes and navigate this new economy.

I talked to a reporter from the UK yesterday, and if this was Europe, I wouldn't be as concerned about having so many cohabiting unions that substitute for marriage. But the United States has the shortest duration of cohabitation. About half of all cohabiting people will either marry or break up within two years. Maybe 40 percent are married and 60 percent are disrupted. So if you don't marry, you are likely to break up pretty quickly, which leads to further cohabiting unions and more instability.

SK: Does this exacerbate the gaps between kids of the college-educated and children of those with less education?

AC: It reinforces the great economic inequalities we're seeing. I think the hollowing out of the middle of the job market is causing the greater instability in high-school-educated young adults and their family lives. This is how we're seeing the disappearance of middle-skill jobs affect our daily lives. It's through the family lives of these people in the middle who can't find their way to stability and aren't forming marital bonds.

SK: Is there a way to turn this trend around? It seems like the gaps in marriage only get larger with these impacts on kids.

AC: It depends on if you think we can turn the middle of the job market around, and if we can find productive employment for high school graduates. If that happens, then I think we have a chance of reversing the instability we're seeing in family lives. I also think that it might be a good idea to promote a message that one should wait to have children until one is in a stable marriage. Giving people a version of an alternative future where that's possible might be good.