Share All sharing options for: Six numbers no one should ever forget about the war in Iraq

On Thursday, President Obama announced that 300 American military advisers would head to Iraq to assist the government in its fight against ISIS rebels. That, Zack Beauchamp argues, could lead to US airstrikes in the country going forward: "The advisers would be deployed to 'joint operation centers' on the ground to coordinate US and Iraqi intelligence on the conflict. Previous reports on Obama's thinking suggested that he had ruled out airstrikes in the near term because of a lack of intelligence about who to bomb. These centers could solve that problem, enabling the US to launch air strikes if and when Obama decides to."

Obama also ruled out "the return of US troops to direct combat roles in Iraq," but one could be forgiven for being skeptical given the history of US military advisers in other countries' internal conflicts.

Meanwhile, outsiders like former Iraq viceroy Paul Bremer and neoconservative writers Bill Kristol and Fred Kagan have expressed support for boots on the ground. While it's doubtful the Obama administration takes them seriously, it's likely calls for increased action will only grow louder over time.

With that in mind, it's worth remembering the catastrophic costs incurred the last time the US thought it might be a good idea to involve our military in Iraq. Here are six numbers that detail the human, economic, and political toll the invasion of Iraq caused. 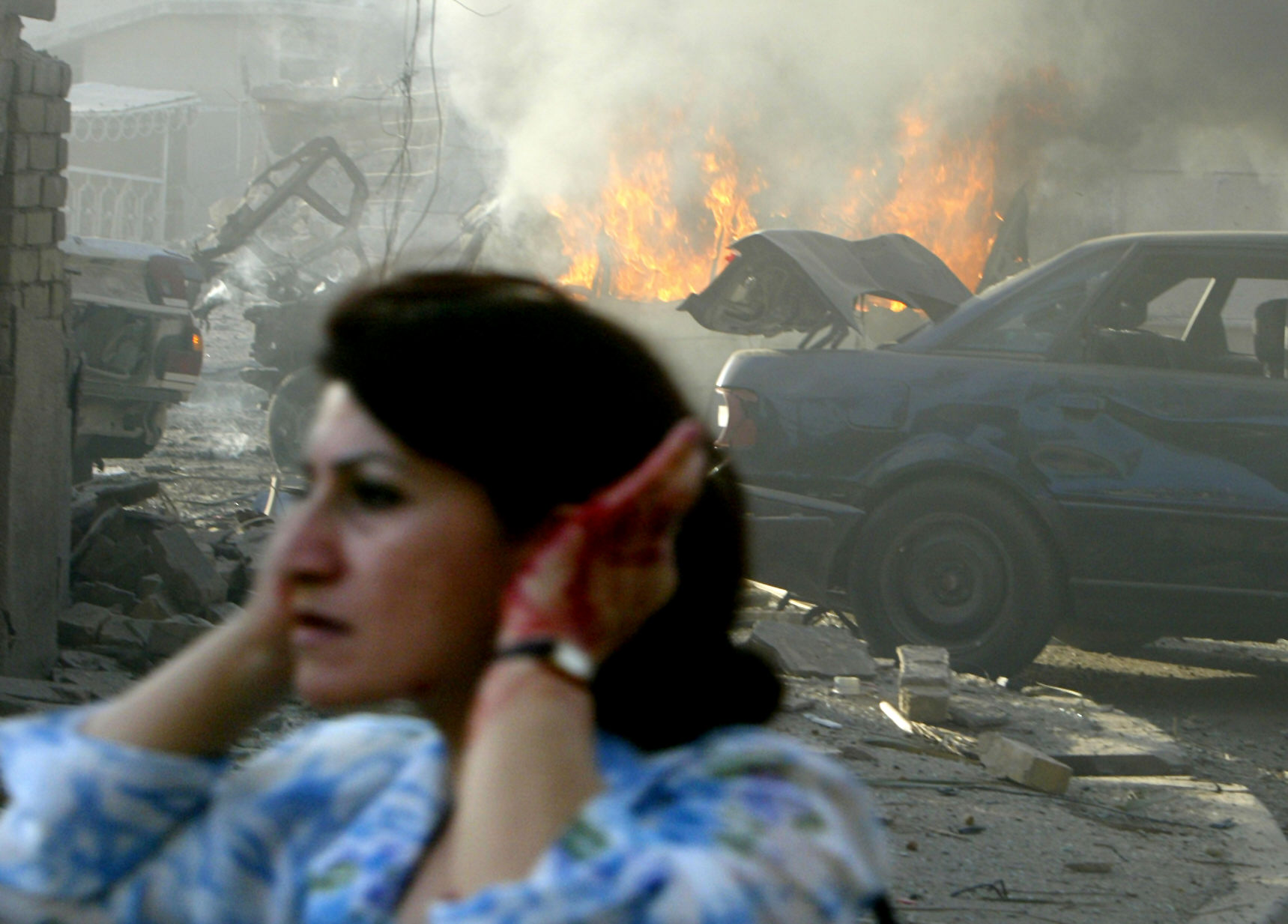 The Iraq Body Count project, which uses "media reports, hospital, morgue, NGO and official figures" to estimate the civilian toll of the war, estimates 126,107 to 140,961 civilian deaths from violence.

So the 126,107 civilians deaths shouldn't be taken as fact. Rather, it's a conservative estimate of the number of civilians who died. 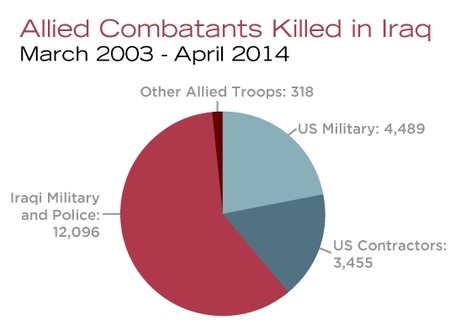 4,486 US service members died in Iraq. 318 troops from other coalition countries, including 179 from the UK, died as well. Brown University's Costs of War project estimates that 3,455 US contractors, 12,096 allied Iraqi military and police, 246 journalists and media personnel, and 62 humanitarian workers died. About 36,000 people fighting for the opposition died.

While estimates of uniformed service members from the US and coalition are fairly precise, contractor, Iraqi military, and especially opposition fighter casualty numbers should be approached with a degree of caution. Nonetheless, the death toll all around was considerable. 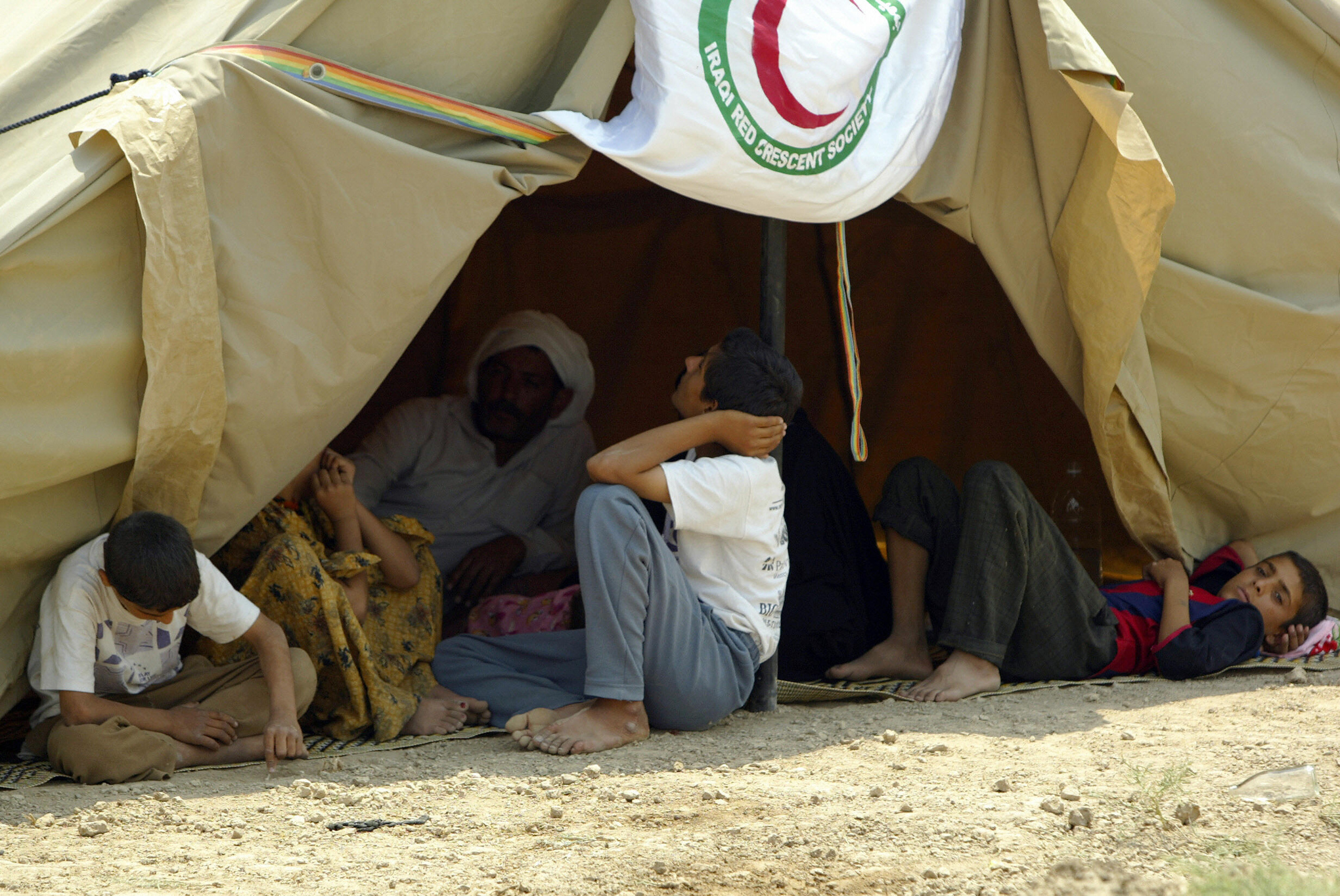 Iraqi refugees from the violence-ridden Diyala province, northeast of Baghdad, sit in their tent, provided by the Iraqi Red Crescent Society in the al-Husseiniya district of the capital city, 15 May 2007. Photo by Ali Al-Saadi/AFP/Getty Images

The UN High Commissioner for Refugees (UNHCR) estimated that 2.1 million Iraqis were living as refugees in other countries in 2007, and another 2.4 million were internally displaced — that is, they were forced to flee their homes but are still within the country.

That number has gone down somewhat as violence calmed after 2008. As of 2013, UNHCR estimated that 401,400 Iraqis were living as refugees in other countries, and 954,100 were internally displaced. The latter number may be a bit low; the Norwegian Refugee Council estimates as many as 2.1 million Iraqis are internally displaced.

Both refugees and internally displaced persons from Iraq are increasing after the recent violence, with 500,000 people fleeing Anbar province since January and then another 300,000 fleeing Mosul when it fell to ISIS, according to UNHCR.

4. $817 billion in direct costs, and trillions more in indirect costs 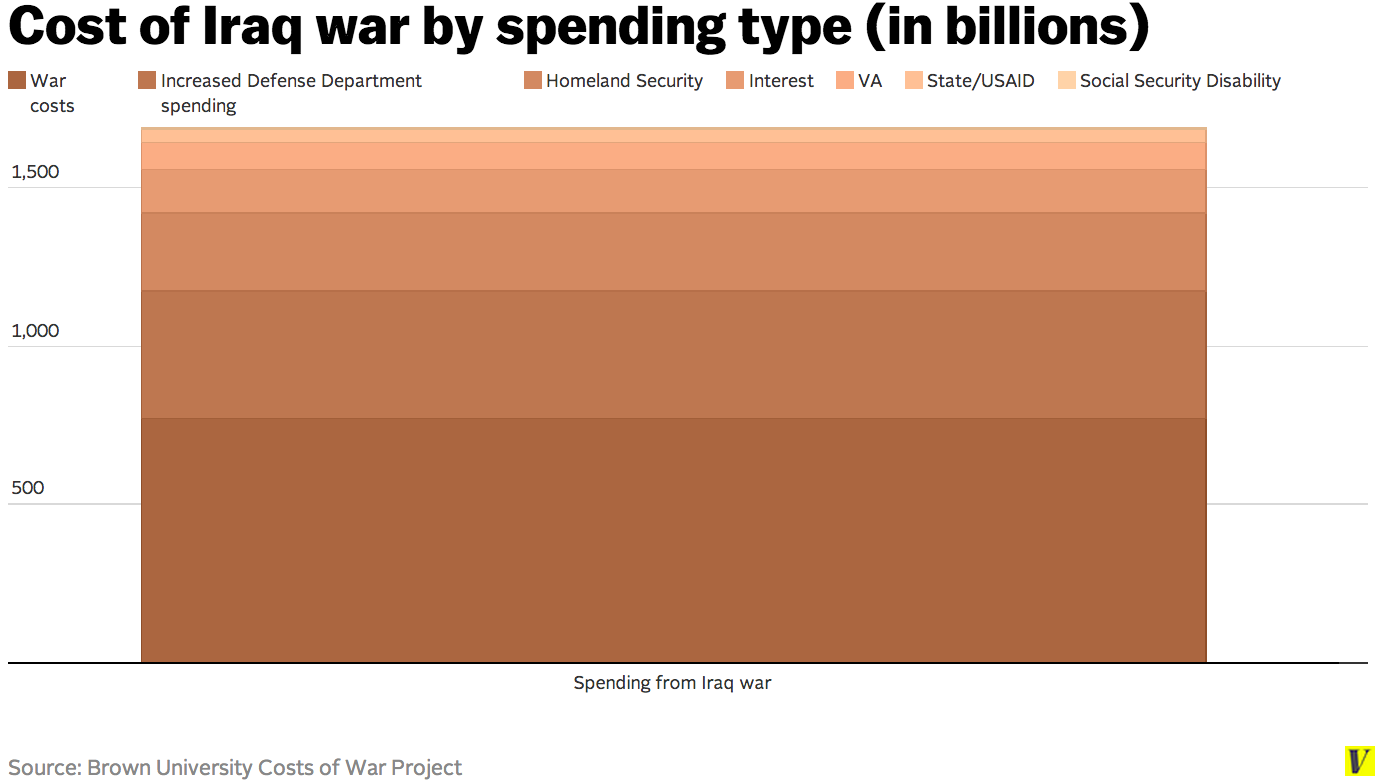 The National Priorities Project runs an ongoing tally of costs directly related to the prosecution of the war in Iraq, and currently it states that the US has spent about $817 billion on the conflict.

But that's a fraction of the wear's true, total cost. The Costs of War Project finds that when you incorporate costs incurred by the State Department, the VA, interest from debt, and so forth, the actual cost is closer to $1.7 trillion. Throw in future veterans care and disability costs and you get to $2.2 trillion — even if you use discounting and don't include future debt interest payments.

There are other expenses — like future State Department spending, GI bill spending for veterans, and, of course, costs to coalition countries and to the Iraqi economy — not included in the Costs of War Project's numbers.

All that spending did have benefits for the domestic American economy. But it's worth considering the opportunity cost. Economist Heidi Garrett-Peltier has argued that using the money for a jobs package targeting expanded access to health care, education, and clean energy would have had a more favorable macroeconomic impact.

5. Iraq is no freer than Iran 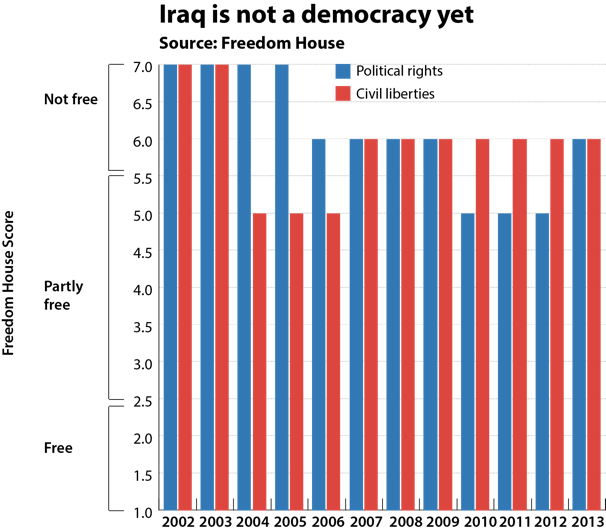 Freedom House, a well-respected nonprofit that estimates democratic accountability and civil liberties in countries around the world, rates regimes on a scale of 1 to 7, 1 being free as possible and 7 unfree as possible. Each country gets a score for political rights and another one for civil liberties. For example, liberal democracies like the US, UK, France, and Costa Rica get perfect 1s on both, while North Korea gets a 7 on both. Most dictatorships don't quite max out like that; China gets a 6 on civil liberties and a 7 on political rights, while Russia gets a 5 and 6 respectively.

Currently, Iraq gets two 6s, identical to the score of Iran. "Iraq is not an electoral democracy. Although it has conducted meaningful elections, political participation and decision-making in the country remain seriously impaired by sectarian and insurgent violence, widespread corruption, and the influence of foreign powers," the group's report explains. "Freedom of expression is protected by the constitution, but in practice it has been seriously impeded by sectarian tensions and fear of violent reprisals."

Of course, Freedom House scores are, like any measure, imperfect, but it's still jarring that we left Iraq in a political state closer to that of Russia or Iran than that of any recognizable democracy. 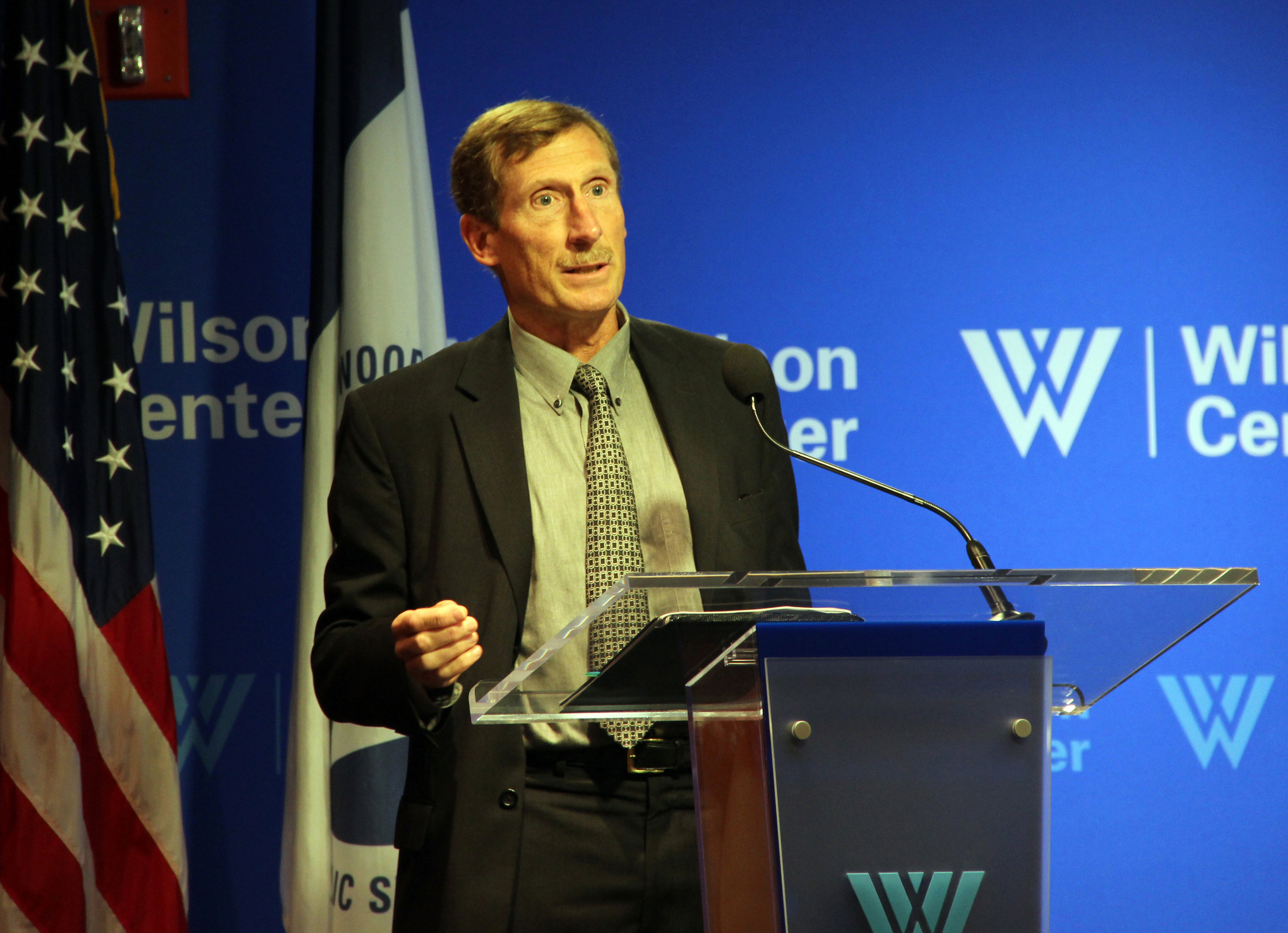 As weapons inspector Charles Duelfer told the Senate after he and the Iraq Survey Group scoured the country for evidence of biological, chemical, and nuclear weapons programs, "It is my judgement that retained stocks do not exist. I still do not expect that militarily significant WMD stocks are hidden in Iraq." None have come to light since he said that ten years ago. You can read the ISG's full report here.

So not only did hundreds of thousands of people die and trillions of dollars get squandered, but the actual strategic objective of the war (defusing the WMD threat) was nonexistent, as was the humanitarian objective of creating a pacific liberal democracy. The war accomplished little to nothing at an enormous cost. Let's not repeat it.