Honor killings are once again becoming a national controversy in Pakistan, where they claim as many as 1,000 womens' lives every year. And a big part of the debate there has to do with an uncomfortable fact: lots of Pakistanis say they support honor killings. The practice, in which a family will murder one of its own members for a social transgression such as having pre-marital sex, is receiving another round of international attention over the recent killing of a pregnant woman in Lahore. The 25-year-old was stoned to death by her own father and 20 other relatives for getting married without their consent. 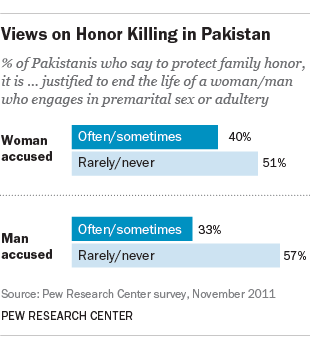 Honor killings are neither mentioned in nor sanctioned by the Koran, nor are they at all exclusive to the Islamic world. But some Islamist fundamentalists have nonetheless promoted honor killings, including in Pakistan, despite the fact that mainstream Islamic leaders in Pakistan publicly denounced honor killings as un-Islamic and wrong this week; a 2004 law formally prohibits the practice. Still, every year, according to rights groups that track the issue, several hundred Pakistani families kill one of their children for bringing shame to their family, the vast majority of them women.

Take the case, from 2007, of a 13-year-old Pakistani girl who was gang-raped and then formally condemned by village elders for having sex outside of wedlock. Her family was pressured to murder her in an honor killing but refused, instead asking police to arrest her rapists. The police refused and community members attacked the family for failing to take her life. Her family's legal battle for justice for her rapists made her case a national symbol of the fight over honor killings.

The reasons that honor killings continue, in Pakistan and elsewhere, are deeply complicated. Pakistani writer Bina Shah wrote this week, "People in Pakistan get away with these kinds of executions of women because of weak laws, contradictory legislation, and the overarching power of jirgas, or extra-judicial tribal court systems which reserve the harshest punishments for women exercising their free will."

Shah explains that structural causes such as legislation and weak institutions are exacerbated by deeply patriarchal attitudes that, while of course far from universal in Pakistan, can persist in some local communities, local "jirga" authorities, and even police department that may refuse to arrest parents who commit honor killings:

Worse still is that attitudes towards women who marry of their own free choice as having stained the honour of the family still persist. Even the policemen at police stations often won't register a crime against a woman in this case because they agree with or sympathise with the angry family who wanted her dead. Combine this with a still-strong jirga system where men get together and condemn a woman (and sometimes her husband or partner, but he is almost never met with the same fate) to death for having acted out of her own free will.

Lots of Pakistanis vocally oppose honor killings — there have been grassroots campaigns to stop them — but many support the practice, and that is part of why they persist.

In May 2013, Pew released the results of a multi-year, 39-country survey of countries with large or majority Muslim populations. One of the questions they asked was whether it was justified for a family to "end the life of a woman who engages in premarital sex or adultery" — in other words, whether honor killings are permissible — and 40 percent of Pakistani respondents said it was "often" or "sometimes" okay.

Local communities in which many or most citizens believe that honor killings are permissible, or even just in which many or most people in positions of power believe this, would seem naturally more included to tolerate or even encourage this practice. So while popular attitudes are surely far from the only factor that explains the continuation of honor killings, they can play a significant role.

The roots of that popular support are themselves remarkably complex and a subject of live and continued debate among scholars; it's safe to say, at the very least, that the cause is not Islam. Some historians suggest that, during colonialism, European powers found and promoted preexisting voices of misogyny. That was a sort of bargain in which local intolerant voices were given power over social codes in exchange for surrendering political control to the Europeans, and it has allowed institutional misogyny to persist. Other observers point out that secular political authorities in countries with violent religious extremists, such as Pakistan, sometimes tolerate extremist practices such as honor killings in the hopes of placating those extremists. 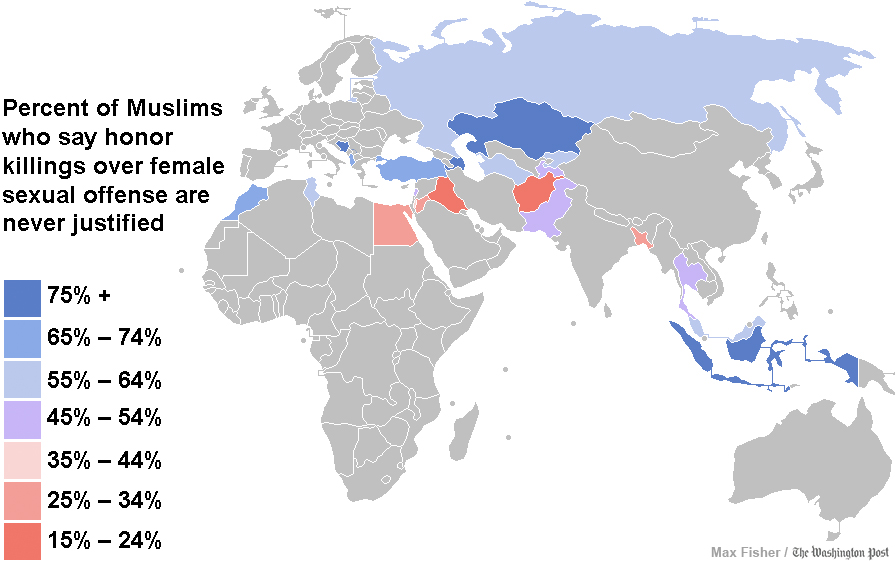 The surveyed country where people most oppose honor killings of women is Kazakhstan, where 84 percent say it's never justified. The surveyed country where the practice is least opposed is Afghanistan, where only 24 percent of respondents said it was never justified, followed by Egypt with 31 percent. In Jordan and Afghanistan, that number is 34 percent, or about a third.

By comparison, 45 percent of Pakistani poll respondents said that honor killings of women were never justified. Keep in mind, though, that Pakistan is one of the world's most populous countries with 180 million people, so even a minority of honor killing supporters can do a lot of damage if they have local control. And that drives home Shah's point about the importance of laws, governance, and strong institutions in preventing this awful practice.