E-cigarettes are marketed to millions of teens

Share All sharing options for: E-cigarettes are marketed to millions of teens

The federal government has banned television and radio ads for cigarettes since 1971. But that ban doesn't apply to e-cigarettes, which are in the midst of an advertising boom.

As many as 24 million adolescents have been exposed to television ads for e-cigarettes in the past few years, a new study in the journal Pediatrics finds. 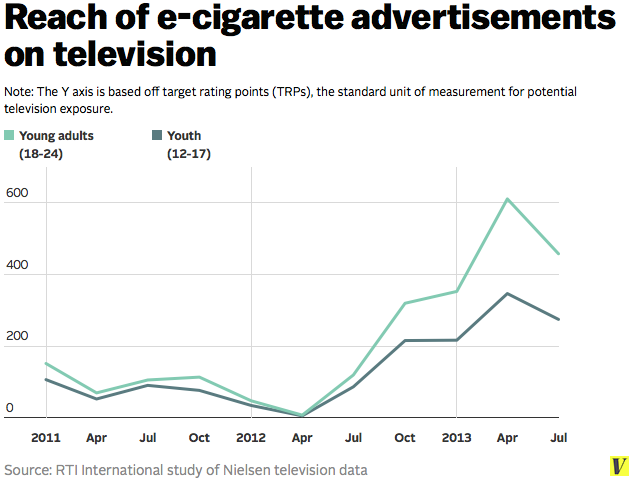 That overall trend, however, affects regions differently.  Based on the Nielsen data looked at by researchers, Ohio and Virginia seem to be seeing some of the most television ads for e-cigarettes.

Reach of e-cigarette advertisements on television 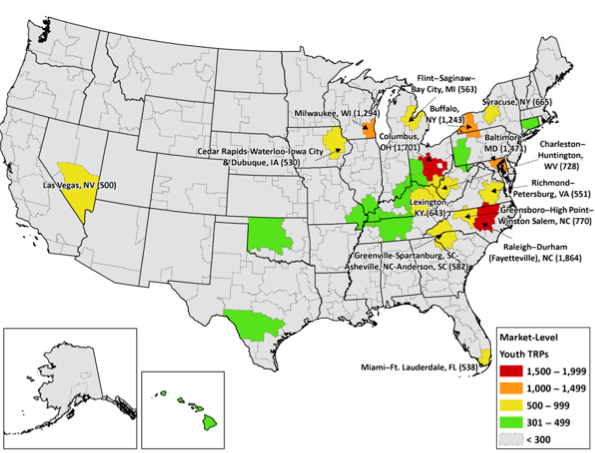 As researchers point out, the boom in advertising could cause serious health problems if it increases e-cigarette use among youth. Nicotine, which can be found in some e-cigarettes, strains development among adolescents. There's also some evidence that e-cigarettes might lead youth to smoke conventional tobacco products by getting them hooked on nicotine.

Federal regulations don't yet ban sales of e-cigarettes to minors, which means it's up to cities, counties, and states to regulate sales until the federal rules kick into effect.

Given the concerns and data, the researchers called for public health messaging that warns of the potential risks of e-cigarettes to help counteract ads potentially selling the product to teenagers.