Hurricanes with female names have killed more people. But why?

Share All sharing options for: Hurricanes with female names have killed more people. But why?

Why would that be? A hurricane's name, after all, has nothing to do with how dangerous it is. But one possibility is that people are less likely to flee for safety when a hurricane with a feminine name is approaching — in part because they perceive it as weaker and less dangerous.

That's the surprising conclusion of a new study published in PNAS, which finds that severe hurricanes with more feminine names kill more people. (This held true even after leaving out the statistical outliers of Hurricanes Katrina and Audrey, which killed far more people than the average hurricane.) The authors also performed psychological experiments in the lab, which revealed that people found the same hurricane presented with a more feminine name to be less dangerous.

The crazy thing about this study is that the effect it found has nothing to do with overt bias. That is, it wasn't linked to people's beliefs about gender.

The study is part of a growing body of research that has been revealing the impact that implicit, irrational, unconscious biases play in our everyday lives — biases that most people are unaware of and often run counter to their consciously held beliefs.

The most stunning recent example of implicit gender bias may be a study published in 2012 that showed that scientists — who one might expect to be paragons of rational thinking — said that job applications with male names were more competent and hireable than identical ones with female names. This was true for male and female professors alike, even in fields like biology that have plenty of women in them. (You can test out your own implicit biases on race, gender, and sexual orientation at this research site.)

This new hurricane study shows that implicit biases might have the power to kill. Or to save.

"When we think about 'a bias' we usually think about an error in our thinking that might negatively affect another person," Mahzarin Banaji told me. She is a psychologist who studies implicit biases at Harvard. "In this paper, the authors reveal how a gender bias can affect our own well-being."

How hurricanes get names

A hurricane's name is arbitrary and has nothing to do with its severity. That's because hurricanes are named years in advance.

The National Weather Service uses name lists from the World Meteorological Organization that alternate gender with every storm. In 2014, Atlantic hurricanes start with Arthur and then Bertha. In 2015, they'll start with Ana and then Bill. The National Weather Service uses a cycle of six name lists. Today, we already know that in 2019, the 21st Atlantic hurricane will be named Wendy.

The National Weather Service says that hurricane naming came into practice to make the storms more memorable and to decrease errors and confusion, especially when there's more than one hurricane swirling at a time.

The US started using female names for storms in 1953. Then, in the late 70s, men's names were introduced in the alternating fashion that's still used today.

Hurricane names for the Atlantic region 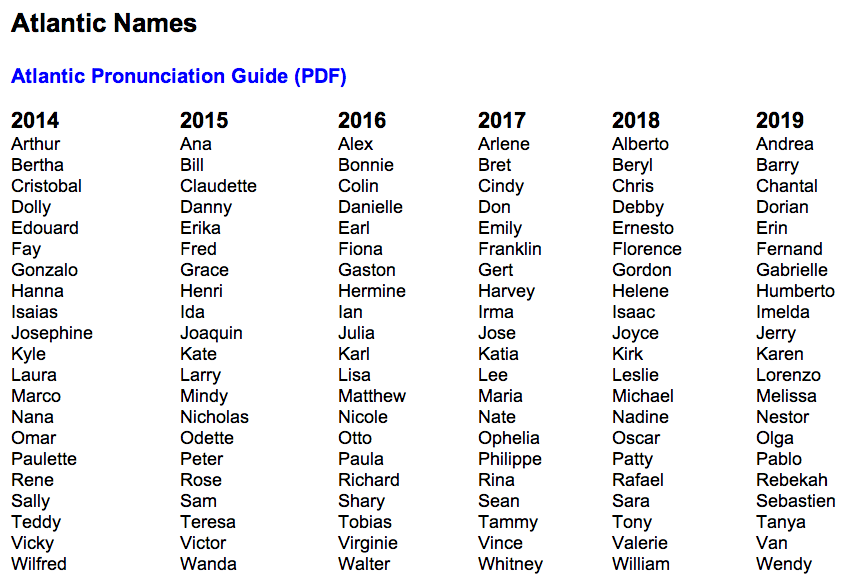 The World Meteorological Organization will only retire a name "if a storm is so deadly or costly that the future use of its name on a different storm would be inappropriate for reasons of sensitivity." You can see a list of retired names, such as Katrina, Sandy, and Andrew, here.

In a controversial move, The Weather Channel started naming winter snowstorms in recent years, but this practice is not supported by the US National Weather Service or other forecasters like AccuWeather or the Weather Underground.

Hurricanes with feminine names have been deadlier

The authors of the PNAS study did a historical analysis of 92 actual hurricanes that made landfall in the US from 1950 to 2012. They took the storm's names and gave them to a group of participants (who didn't know that they were hurricane names) and asked them how masculine or feminine each one was.

Analyzing the historical data, the authors found an intriguing correlation: among more damaging hurricanes (the black bars below), the more feminine the hurricane's name, the higher the death toll.

According to their model, the name of a hurricane could be the difference of dozens of lives. "In other words," the authors write, "our model suggests that changing a severe hurricane's name from Charley to Eloise could nearly triple the death toll."

(The authors omitted the exceptionally deadly outliers Hurricanes Katrina and Audrey from the analysis below, although the trend of more deaths for feminine names does hold with them included.)

the bias was there regardless of people's expressed beliefs about gender

The participants who read about storms with male names, on average, ranked those storms as more intense and riskier. And they said that they were more likely to evacuate than those who read identical scenarios with female names.

In these experiments, the differences between male and female names weren't huge (about half to a full point on a seven point scale), but they were statistically significant. And it's possible that these small differences could have large effects if spread out across a big population in the path of an oncoming storm, but right now no one really knows for sure.

The hurricane phenomenon fits the pattern of an implicit gender bias. For most of the experiments, the bias was there regardless of people's expressed beliefs about gender, such as "women are warm" or "men are aggressive." And when people were asked explicitly about gender in a task that asked them to assess the risk of pairs of hurricanes such as Hurricane Alex vs. Hurricane Arlene, the gender bias disappeared.

How can we use this information to save lives?

Would it have helped if Katrina had been Hurricane Karl? Or Hurricane K? What are the possibilities here?

1) Only give hurricanes male names. It seems pretty darn socially unacceptable to start giving only male names to hurricanes, even if it would possibly save lives.

2) Get rid of all hurricane names. The PNAS authors actually tried this in two experiments, and the results weren't pretty. People rated nameless hurricanes as slightly less dangerous than ones with female names. No one really knows why, but the authors speculate that perhaps the history of big, deadly female hurricanes such as Katrina has given nameless hurricanes a somewhat female identity. It's possible, though, that if we switched to no names at all, this effect would disappear over the course of many years or decades, as more and more hurricanes come and go with no gendered names at all.

3) Use gender-neutral names. Pick whatever names are at the center of the gender scale. Test that scale every year to make sure your names are still perceived as gender neutral. Change scale accordingly.

4) Give deadlier hurricanes more masculine names. Perhaps this implicit gender bias can be exploited for good. This isn't a perfect idea, though. Hurricanes can change severity over time, so it's possible that an Alex would end up as more of an Annabella, or vice versa.

Are there reasons to doubt the study?

These are all intriguing ideas, but it's important to remember that they are still in the idea stage. No one knows how big — or small — the effect might be in the real world, or if it's big enough to warrant action.

It's important to remember that this research is still very young. Rebecca Morss, a scientist at the National Center for Atmospheric Research whose research includes how people communicate the risk of hazardous weather events, says that the social side of these things is quite important, but also reminded me that these people were tested in a lab and not during an actual emergency.

"In a real hurricane situation," she says, "people are receiving many different pieces of information over a period of hours or days, in what can be a high-pressure situation where people are dealing with family interactions, monetary and other constraints, etc. While the study addresses an interesting concept, further research would be needed in order to justify actual changes in hurricane communication practice."

Sharon Shavitt, a professor at the University of Illinois at Urbana-Champaign who co-wrote the study, warns that any major change to how hurricanes are reported could have major — and unintended — consequences. "We want to be careful about jumping to any conclusions about policy," she told me. "We might be surprised by the associations that people infuse into any new label we create."

And it doesn't seem that the US government is rushing to dismantle its current system. I contacted the US's official National Hurricane Center and asked them if anything should be changed. This is what I got in return: "'Whether the name is Sam or Samantha, the deadly impacts of the hurricane - wind, storm surge and inland flooding - must be taken seriously by everyone in the path of the storm in order to protect lives. This includes heeding evacuation orders.' — Dennis Feltgen, spokesman, NOAA National Hurricane Center."

Correction: The first sentence of this story originally said that hurricanes with more masculine names kill more people. It's been corrected.