What polls tell us about Americans' belief in global warming

Share All sharing options for: What polls tell us about Americans' belief in global warming

On Monday, the Environmental Protection Agency released new rules regulating the emissions of carbon dioxide from US power plants. This is the Obama administration's most significant move in responding to global warming so far.

Virtually all scientists agree that human activity is changing the climate

In American politics, global warming is a contentious issue. Virtually all scientists agree that human activity is changing the climate, but many politicians — especially conservatives — do not.

So what do normal Americans think about global warming — and these new rules in particular? Various polls arrive at slightly different results (often due to the wording used in questions) but they're generally pretty similar. Here are the results of a recent Pew poll.

There's extremely solid evidence that, on the whole, the Earth is getting warmer.

About 67 precent Americans agree with this — but there is still a substantial minority of people who do not.

The split is especially pronounced when you consider political affiliations: people seem to follow their political leaders' beliefs on the topic. About 84 percent of Democrats believe the Earth is warming, compared with 46 percent of Republicans. 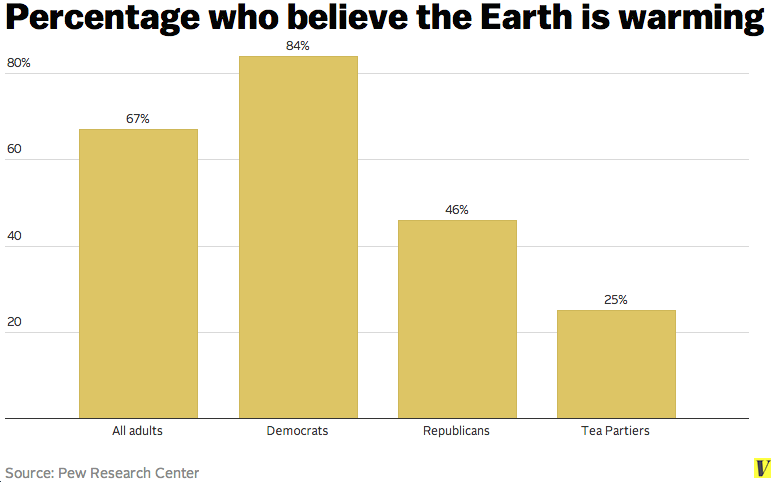 Only a minority believe this warming is caused by humans

Again, scientists are in clear agreement that our emissions of carbon dioxide and other greenhouse gases are changing the climate, causing it to become warmer.

But average Americans are less certain about it. To those who'd said yes to the previous question, Pew asked whether human activity or natural patterns were the cause of warming.

Though 67 percent had said yes, just 44 percent attributed the warming to human activity, while 18 percent blamed natural variation (5 percent said they didn't know the cause).

Like the first question, there was also a distinct split along party lines. The Republicans and Tea Party members that do say the Earth is getting warmer are much more likely to attribute it to natural variation. In total, just 23 percent of Republicans attributed warming to human emissions. 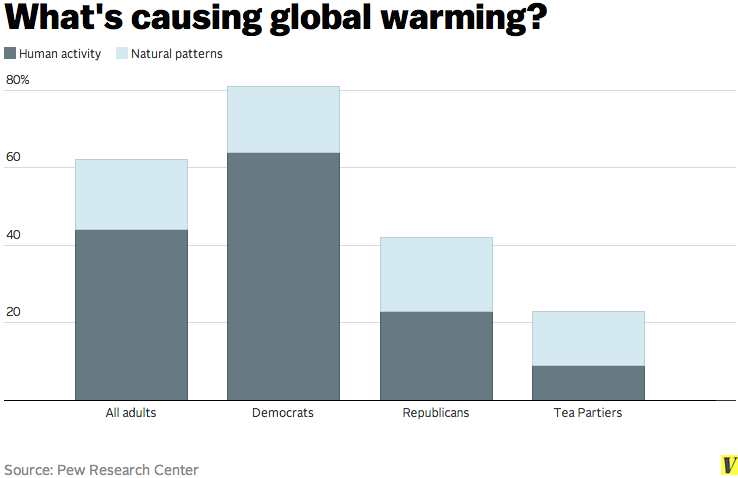 Interestingly, Pew also asked US residents whether they support new carbon dioxide emission rules for power plants — the exact sort of rules that were proposed Monday.

Most American adults don't agree that these sorts of emissions are causing the climate to change. But strangely, majorities supported these rules. This cut across party lines: 74 percent of Democrats supported the rules, but 67 percent of Independents and 52 percent of Republicans did as well. 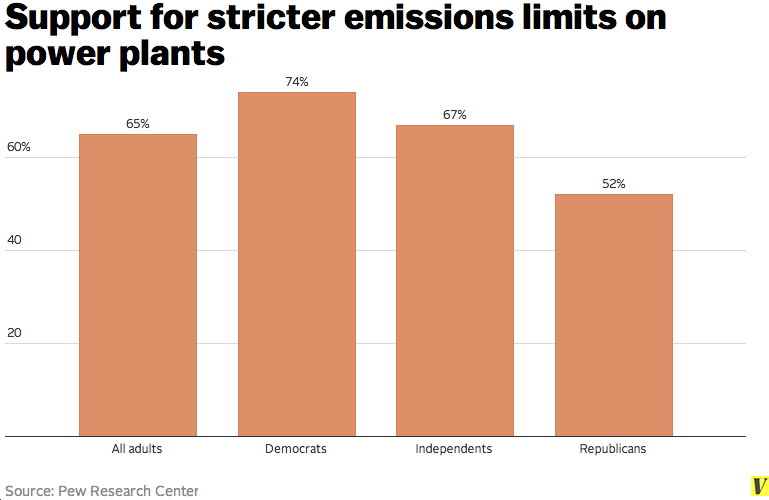 One caveat is that with this sort of question, phrasing is extremely important. That's because most people aren't familiar with these proposed regulations, so the way they're explained can make a huge difference.

For instance, a 2013 Stanford poll asked different participants about global warming regulations in slightly different ways, and found that 60 percent favored a cap and trade system when it involved the government "issuing" emissions permits to companies, but only 48 percent favored one that involved the government "giving" out permits. None of the questions told respondents that these regulations might cause energy prices to rise.

All this means that people's beliefs about these new regulations will probably change as they learn more about them — and that learning a lot from poll questions about them is tricky.

out of 39 countries, the us was 33rd in global warming concern

Pew also asked people in 39 different countries whether they considered global climate change to be a major threat to their nations.

There was a lot of variation among the answers — in Greece, 87 percent of respondents saw it as a major threat, while only 15 percent of people did in Pakistan. Just 40 percent of Americans answered yes, putting the US near the bottom: it was the 33rd most concerned country in the survey group of 39. 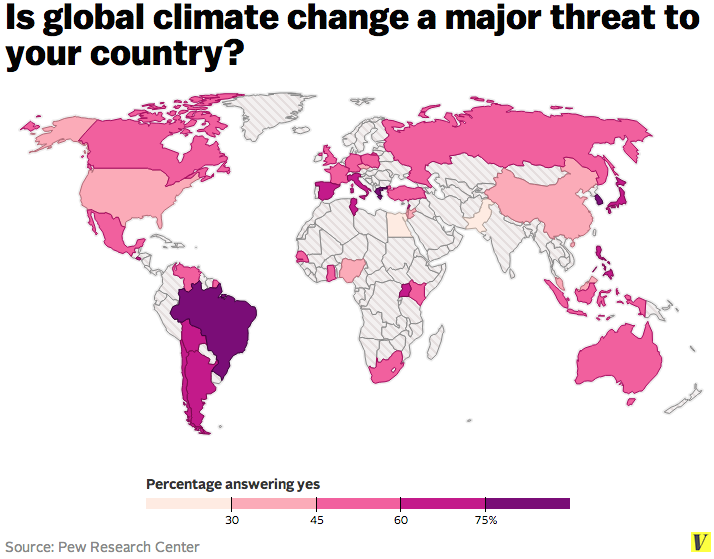