Think Obamacare helped you? You're probably a Democrat

Share All sharing options for: Think Obamacare helped you? You're probably a Democrat

Republicans are five times less likely to say they've been helped by Obamacare than Democrats — and about half as likely to know someone who has gained coverage through the law.

Those are some of the key findings from the newest Kaiser Family Foundation poll. They could suggest that Democrats really are way more likely to get help from Obamacare — and know way more people getting help, too.

But there's a simpler, and arguably more plausible explanation of the new data. Political views deeply color impressions of whether the Affordable Care Act is working — or is a miserable failure. Democrats likely overestimate the health law's reach, Republicans underestimate and the truth is probably somewhere in the middle.

There are two questions in the new Kaiser poll that show huge differences between how many people Democrats and Republicans think the health care law is helping. The first was about whether individuals themselves had been helped by the Affordable Care Act. More than a quarter of Democrats said yes, they'd been helped, while the number was 5 percent among Republicans. 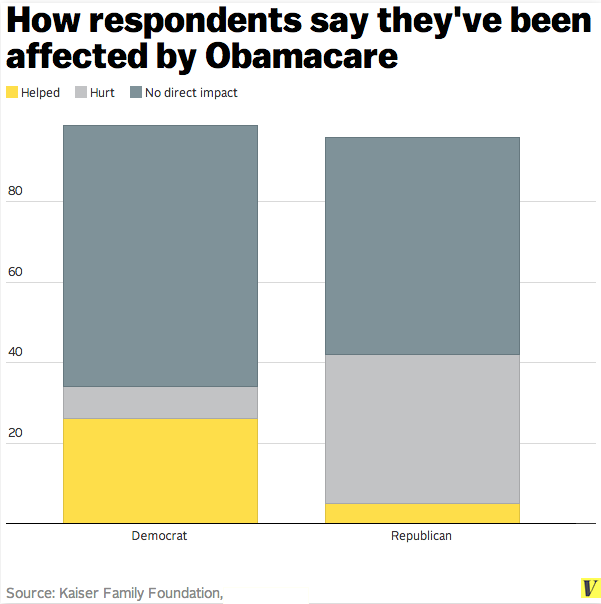 The second question asked whether respondents knew someone else who had been helped by the Affordable Care Act. Again, there was a big disparity between what Republicans and Democrats saw happening with the people they know. 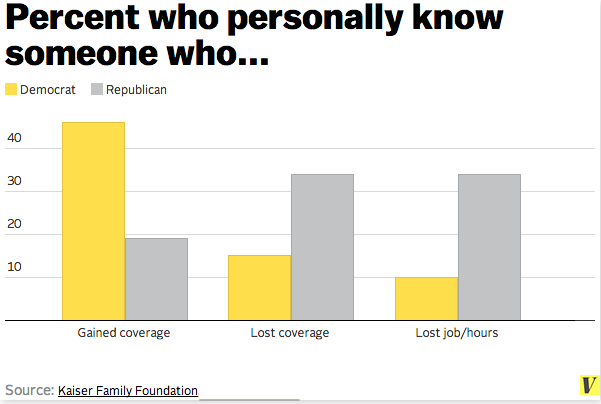 Republicans, meanwhile, were more likely to say they knew someone who lost their health coverage, or had their hours cut because of Obamacare.

There could be some reasons why Democrats know more people who have benefited from Obamacare. Democratic governors, for example, have been more likely to expand the Medicaid program, meaning voters there would have access to a part of the health care law that isn't available in some Repubican-run states.

But its unlikely that would account for the huge disparities in perceptions of how the health care law is going. Instead, they seem to reflect the more basic fact of whether people like Obamacare or hate it.