Share All sharing options for: 11 things most people don't know about health insurance

Expanding health insurance is a fundamental goal of Obamacare, but a lot of misconceptions remain about what health insurance does and does not do. Giving someone a card that helps them pay for health care can have a lot of positive effects — but there are limits to the problems that insurance can solve, and there are less desirable consequences, too.

1. Insurance will increase the use of effective, appropriate health care

When people have health insurance, financial barriers to receiving health care are lifted and they increase use of services, which can be a great thing — diseases caught early can be better managed and treated. With insurance, people are able to afford health screenings and prescription drugs that otherwise may have otherwise been unaffordable.

2. It will also increase the use of services that don't make people healthier

A lot of what we know about health insurance comes from the RAND health insurance experiment, an experiment from the 1970s where people were randomly assigned health coverage that required different levels of out-of-pocket spending. People with more generous insurance — which meant they were on the hook for less of the cost themselves — consumed more health care, but it was greater use of both "valuable" and "wasteful" care.

3. Insurance doesn't reduce emergency room use. It increases it.

INDIVIDUALS WHO USE THE EMERGENCY ROOM INAPPROPRIATELY OFTEN ATTACH A HIGH "TIME COST" TO REGULAR CHECK-UPS.

When people have fewer barriers to the emergency room, they will visit it more often. This means more "inappropriate" use of the ER, too — going there for problems that aren't actually emergencies and are better handled through a typical doctor's appointment.

This trend could be stronger among people who face barriers to health care other than affordability. A study published in Health Affairs found that low-income individuals who use the emergency room inappropriately often attach a high "time cost" to regular doctor check-ups. In other words: it was more difficult for them to arrange time away from work, child care, transportation, and the like. Some people also believe that they can receive higher-quality care in the emergency room than from a primary care doctor.

4. There are social determinants of health that insurance alone can't influence

Health insurance makes medical care more affordable, but doctor trips are hardly the only factor that can influences outcomes. Social determinants of health, defined by the CDC as "the circumstances in which people are born, grow up, live, work, and age," also play a huge — albeit less clearly understood — role in health.

Health insurance does little to change those circumstances. To move the needle on social determinants of health, we should look to social services like education, child care, and cash and food assistance.

The chart below is adapted from a presentation by Elizabeth Bradley, a professor at Yale's School of Public Health. Other developed countries actively invest in social services, spending nearly twice as much on those relative to direct health care. The United States inverts that ratio; for every dollar spent on health care, we only spend 56 cents on social programs. 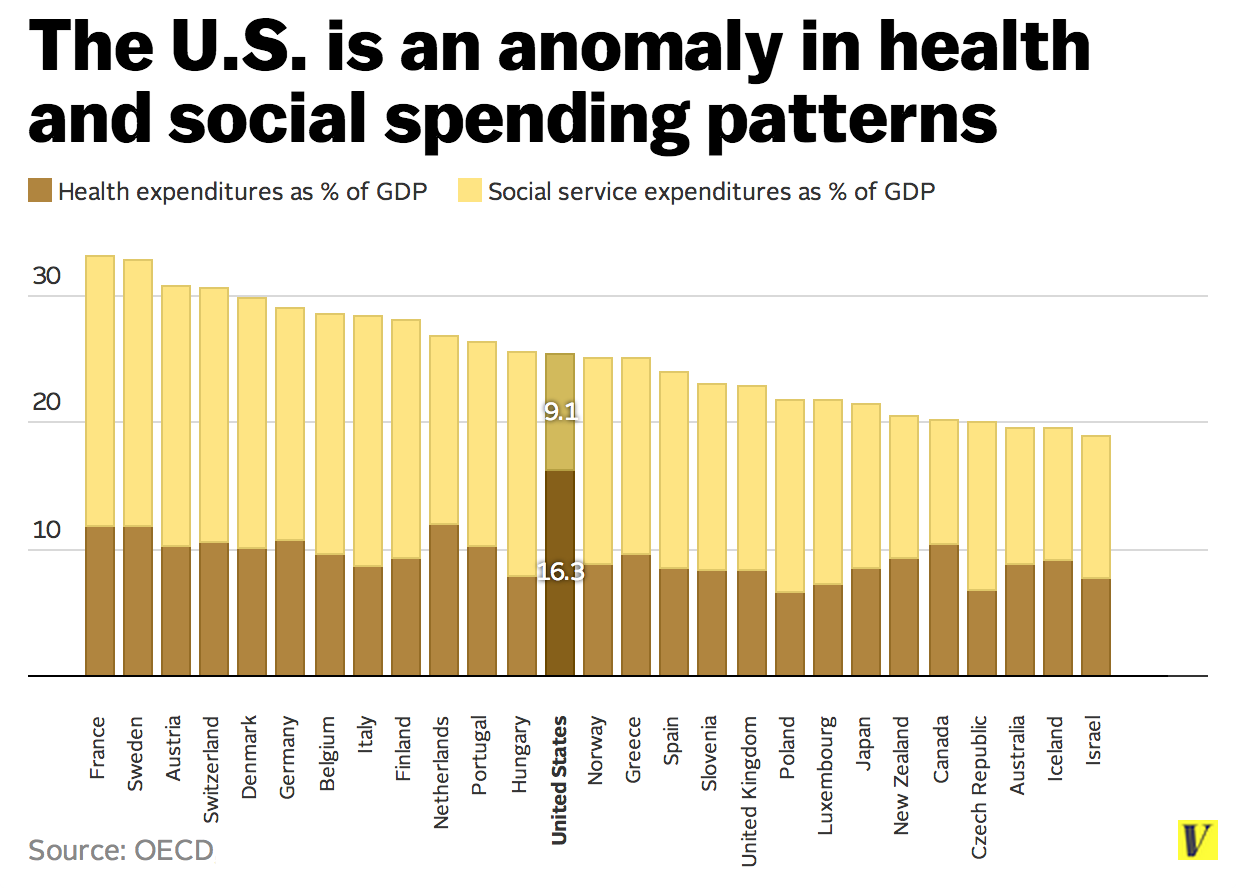 There's a pretty broad consensus that health insurance alleviates financial hardship from catastrophic medical expenditures. The best evidence to date on this is from an expansion of Medicaid in Oregon, where Medicaid enrollment was allocated to certain low-income individuals through a lottery. This created conditions that mimicked a randomized controlled trial, the gold standard in research.

Whether insurance actually puts a dent in medical bankruptcies is tough to say. For example, one study found that rates of medical bankruptcy didn't decline following Massachusetts's 2006 health reform, as we might expect, but the recession may have confounded the study's findings.

That association between insurance and reported health status isn't enough to suggest a causal relationship. Findings from Oregon's Medicaid expansion are: those who were randomized to Medicaid coverage were significantly more likely to report better physical health one and two years after receiving coverage.The Medicaid enrollees also reported substantially better mental health compared to those who didn't receive coverage.

Following the introduction of Romneycare, mortality in Massachusetts fell 2.9 percent relative to similar counties in other states. This suggests that for every 830 people insured, one death is prevented. "In the hierarchy of evidence, this ranks way above everything we've seen in the past in terms of the effects on mortality," David Meltzer, a health economist at the University of Chicago, told the New York Times. Meltzer is the co-author of a widely-cited meta-analysis on the effects of health insurance on health.

"IN THE HIERARCHY OF EVIDENCE, THIS RANKS WAY ABOVE EVERYTHING WE'VE SEEN IN THE PAST"

This is also evidence of insurance having a positive impact on health. An insurance card cannot reduce death all by itself; diseases have to be better treated, managed, or prevented first.

As Amitabh Chandra and Katherine Baicker write in Health Affairs, "The likelihood of getting high-quality care has more to do with geography than with insurance status or spending."

There is an extensive amount of research documenting variation in the quality of care received by Medicare beneficiaries — who are, by definition, all insured. A lot of this variation is geographic in nature, suggestion that there are regional patterns in how medicine is practiced, and some regions provide better care than others.

Health insurance goes a long way toward making health care more affordable, but "access" to health care goes way beyond whether or not a person can afford to visit the doctor.

"ACCESS" GOES WAY BEYOND WHETHER OR NOT A PERSON CAN AFFORD TO VISIT THE DOCTOR.

The nation is short on doctors, and the doctors we do have tend to concentrate in areas that already have high physician capacity; not coincidentally. Regions classified as "health provider shortage areas" are going to face particular strain when coverage rates increase and more people try to schedule medical appointments.

There are also temporal, geographic, and cultural barriers to care. When physicians keep 9 to 5 hours, working adults might struggle to fit an appointment into their schedule. Geographic accessibility can be a hindrance, particularly in rural regions or where an individual doesn't have access to reliable transportation. And, for some patients, cultural factors influence the relative "acceptability" of a provider.

10. Getting everyone insured won't rein in health spending 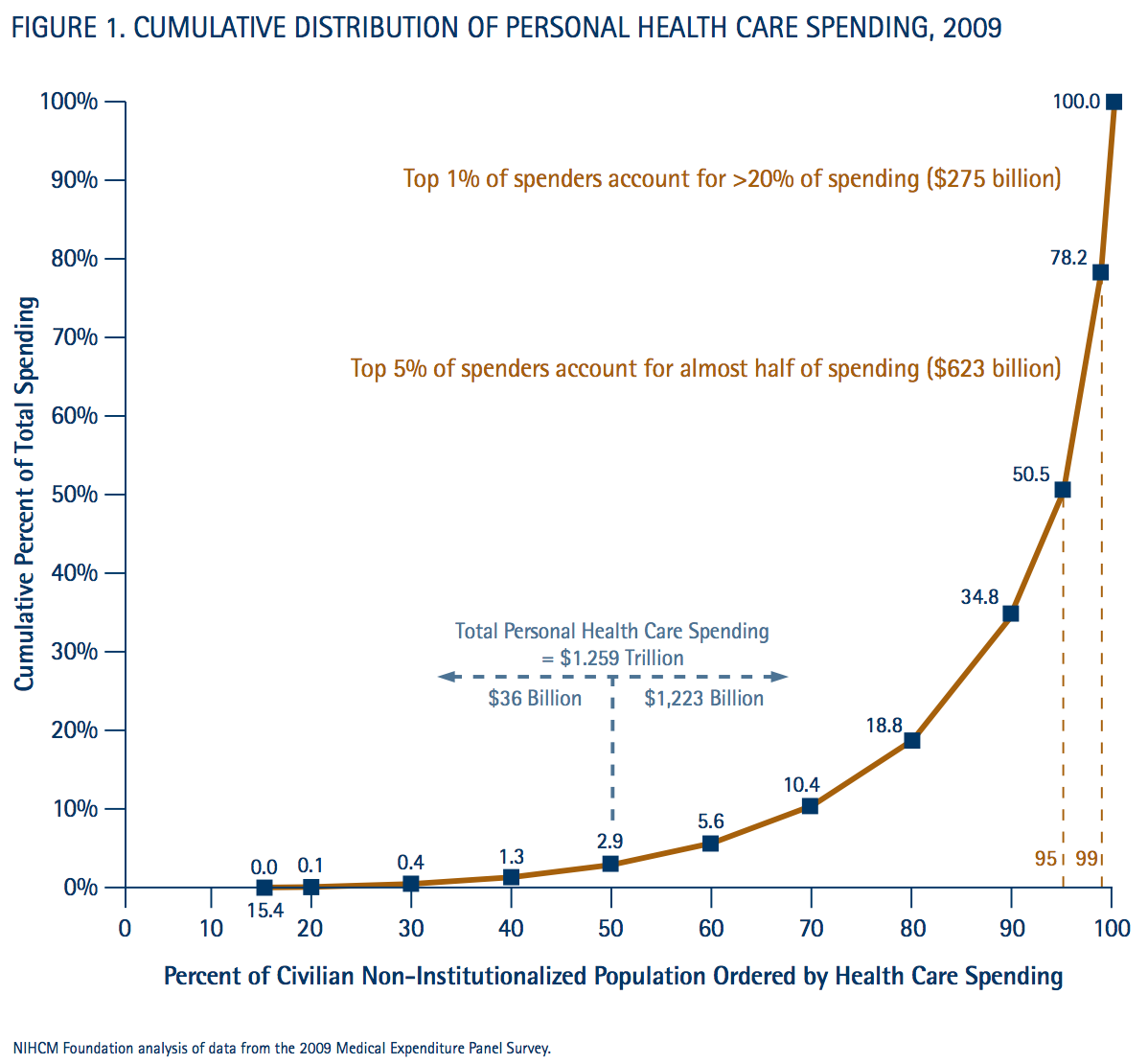 Expanding coverage isn't likely to change this distribution. Other health reforms — changing how we pay for care, not just who we cover — hold much more promise.

11. But we needed to increase insurance coverage before we tried to restrain health spending

Obamacare's primary objective is to extend affordable coverage to millions of people for whom insurance was out of financial reach. It has some elements intended to contain cost growth, too — accountable care organizations, the Independent Payment Advisory Board, the Center for Medicare and Medicaid Innovation — but the bulk of the law concerns itself with expanding coverage.

This is by design.

Back in 2010, health economist Len Nichols authored a thoughtful editorial on the logic behind this move:

Fiscal hawks will still ask why we can't contain cost growth first and expand coverage later. This is a fair question — although the Congressional Budget Office has determined that both the House and Senate health care bills reduce the deficit, and a choice that forces the growing number of uninsured to wait another decade would, in my view, be immoral. Nevertheless, the simple answer to the hawks' question is that it is not feasible to tackle costs without tackling coverage. Our delivery system could not withstand the stress. Two thirds of hospitals lose money on Medicare now. Virtually all lose money because of Medicaid underpayment. To impose serious delivery reform and incentive realignment while leaving hospitals on the hook for the mounting billions of dollars in uncompensated care would bankrupt many and strain most to the breaking point. With expanded coverage, we'll get absolutely essential hospital cooperation. Without expanded coverage, hospitals will have to protect themselves from change, and their local communities will want them to.

Health insurance matters. Achieving near-universal coverage — which Obamacare aims to do — won't solve the problems that plague the nation's health and health care system, but it's an important step in that direction and sets the stage for further health reform.