Share All sharing options for: Nine questions we want the second season of Orange Is The New Black to answer

Orange Is the New Black's first season ended on a major cliffhanger, with the fate of Piper Chapman (Taylor Shilling) in jeopardy, her relationships with fiancé Larry Bloom (Jason Biggs) and ex-girlfriend-turned-prison-paramour Alex Vause (Laura Prepon) in tatters, and her rivalry with Pennsatucky (Taryn Manning) coming to a head. On Friday, we'll finally find out how it all shakes out — not just for Piper, but for everyone else imprisoned at the Federal Correctional Institution at Litchfield. Here are the big questions we're hoping the second season will answer:

To refresh, here's what was happening as of the end of last season:

Piper's plot: Piper is currently single after being rejected by both Larry and Alex.  On top of losing friends, she's also being terrorized by fellow inmate Pennsatucky (Taryn Manning), who, after discovering Piper was responsible for throwing her into the psych ward, and after Piper refuses her efforts to convert her to Christianity, becomes determines to kill Piper. Last we left Piper, she was solving the Pennsatucky problem by delivering a beatdown to Pennsatucky; while we know it was a pretty savage beating, it's unclear if Pennsatucky survived.

The Latinas: Gloria Mendoza (Selenis Leyva) and her gang of Latina inmates are now in control of the kitchen, aggravating Red and giving them newfound influence in Litchfield.

Taystee: In one of the more heart-breaking stories of the season, Taystee (Danielle Brooks) returned to the prison after being freed. She didn't know how to handle life outside of prison and literally has no life or family outside of Litchfield.

Sophia: Sophia (LaVerne Cox) had her hormone therapy denied by the prison. So, she did the logical thing and befriended Sister Ingalls (Beth Fowler) because she thought she would be nice (given that she is a nun) and give her hormones. She was wrong about Ingalls, but still continues to be her friend. She's still in need of hormones.

Miss Claudette: One of the most powerful and most-feared women in the prison was Miss Claudette. At the end of the season however, she lost control after being denied a release, choked an officer, and was sent away (probably to solitary). In real life, Michelle Hurst, the actress who plays Miss Claudette, was in a terrible accident and entered a medically-induced coma. Thankfully, she's been making a slow recovery since then.

The Prison: There's some funny business going on with the prison's books. Though the prison receives money for renovations, no improvements have been made. And Figueroa (Alysia Reiner), the administrator, is going to have to work overtime maintaining her coverups.

How much trouble is Piper in?

The show ceases to exists if Piper, our protagonist, stops being in prison. It would make for a funny conceit if, in order to keep the show going, Piper had to keep getting into more trouble and getting a longer sentence.

In all seriousness though, we last we left Piper, she was grounding and pounding Pennsatucky into submission. Did Piper kill her? Will anyone believe that it was in self-defense? Was it self-defense? Is it going to give us a couple more seasons of Orange?

Who is going to steal the show this season?

OITNB creator Jenji Kohan has called the show a "trojan horse"— a plethora of stories about the prison system, race, and sexuality told by minorities and women of color, wrapped around a story about Piper. In my mind, there were two characters who stole every scene they were in: Taystee and Sophia. The two had the most heart-breaking story arcs in the show.

But there are plenty of other supporting characters like Poussey (Samira Wiley), Lorna Morello (Yael Stone), and new kitchen head Mendoza whose backstories we haven't seen yet.

Are the show's men going to add anything to the story?

And at times, it begins to feel like the characters are just a means to an end. Painting men as the sole cause of these women's troubles (Daya, Daya's mother, Watson) doesn't really leave much about the women themselves to be explored.

To be clear, this is not a plea for more airtime for men. I appreciate what the show has done in reversing — by putting women in starring roles and men in supporting roles — what we usually see on television. My reservations are about what's done in the slivers of screen time we do see the men, and whether or not they add anything to the story. (I think there's an argument to be made that this show's first season might be even better if you eliminated all of the male characters.)

Probably not, but don't underestimate Larry's need to have something to write about.

Is Piper going to stop sabotaging herself?

Unlike the anti-heroes and heroines who've become a prestige TV staple in recent years, Piper Chapman has a rigid sense of right and wrong, and clearly thinks of herself as a moral person. So she does what's "right" even if it isn't in her best interest, or really in anyone's interest. This moral rigidity is the reason she's in jail right now (she didn't have to turn herself in), the reason Pennsatucky is able to threaten her life (Piper got her out of the psych ward, after putting her there in the first place), and the reason why Piper is constantly getting shafted in jail.

Piper still believes she's not as "bad" as the women she's in prison with.  And she might be better off if she were.

Who is this woman? 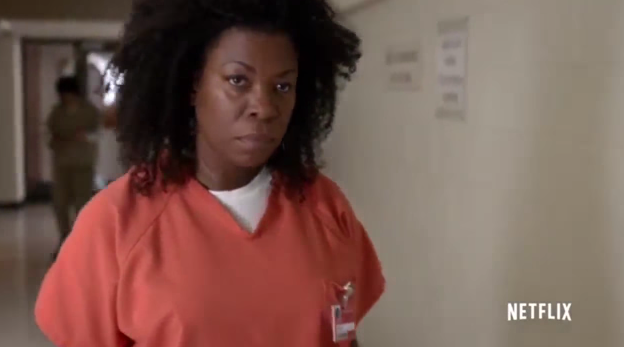 In the show's trailer, a new character named Vee (above) is introduced. Big Red describes her as someone, possibly a rival, from her past. And we're guessing she's going to shake up  Litchfield.

How long until this show doesn't have to be the only one to prominently feature women of color?

Looking back on the show's first season, there are at least 13 non-white, recurring, female characters. That's staggering given how few women of color there are in dramas like Scandal (Olivia Pope, Maya Pope, the president's secretary, and Adnan Salif make four) and The Good Wife (Kalinda Sharma and Geneva Pine) that have generally been praised for their diversity.

And Orange becomes even more of an anomaly when you look at the show compared to the cable television landscape as a whole: 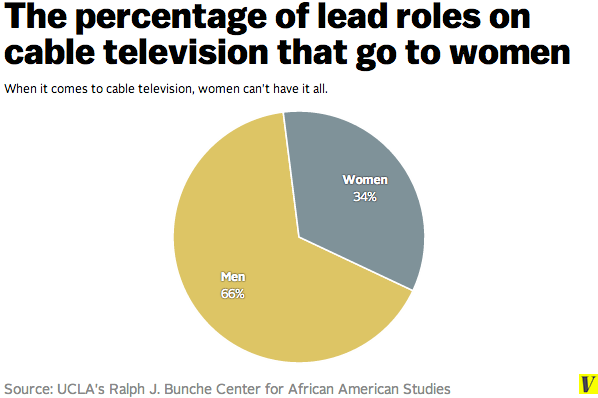 Though the representation and split between women and men is better on broadcast television, there's still plenty of room for improvement on cable/premium programming (we're putting Orange into the cable category since you have to pay for Netflix).  And there is still major work to do when it comes to shows featuring non-white characters on television: 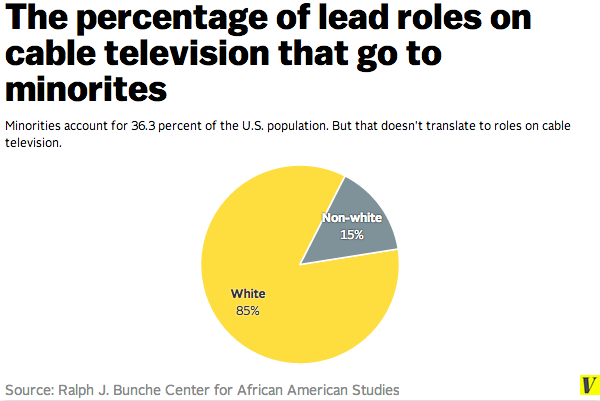 Granted, Orange falls into the majority of shows revolving around white characters. But I would make an argument that though Piper's narrative is central to the show, the show prominently features non-white characters' stories and backgrounds as much or more than Piper's.

At times, this diversity make Orange can feel like the only show of its kind. And a lot of that speaks to the need for shows to be better at including non-white and female characters.

When does the second season come out?

Friday, June 6.  If you are having trouble with the wait, you can try killing the time in two-minute increments by watching the trailer:

Democrats have precedent for a speedy Supreme Court confirmation